"Trump has repeatedly made it clear that he considers violent white supremacists to be a valued part of his base, even after people are murdered." 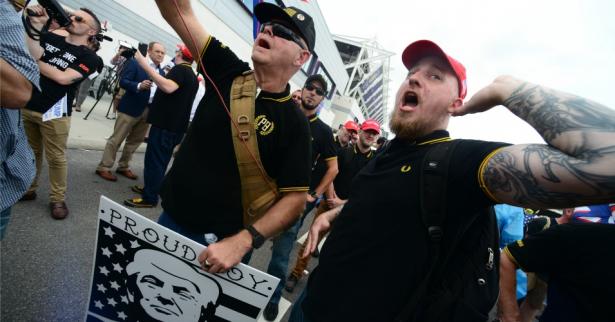 Members of the Proud Boys face off against anti-Trump protesters outside a rally where President Trump officially launched his re-election campaign on June 18, 2019 in Orlando, Florida. , (Photo by Gerardo Mora/Getty Images)

Members of the Proud Boys are rejoicing after President Donald Trump gave the far-right organization a shout-out and marching orders during Tuesday night's nationally televised debate, heightening fears that the president is deliberately rallying extremist groups and stirring up white supremacist violence as part of his frantic effort to remain in power.

The Daily Beast reported Wednesday morning that one Proud Boys leader readily interpreted Trump's comments as instructions to commit violence against the president's political opponents. "Trump basically said to go fuck them up!" wrote Joey Biggs after the president told the Proud Boys, a group that openly embraces violence, to "stand back and stand by."

"This makes me so happy," Biggs added, a celebratory reaction that was echoed by members of the extremist organization on the social media and messaging apps they commonly use, such as Telegram and Parler. One Proud Boys member claimed Trump's comments prompted a surge in "new recruits."

Refusing to condemn white supremacists when given an opportunity to do so by debate moderator Chris Wallace, the president said, "I'll tell you what, somebody's got to do something about antifa and the left."

Shortly following Trump's comments, which were widely condemned by civil rights organizations, one of the Proud Boys' social media accounts incorporated the president's words into a graphic with the far-right group's logo:

Progressive advocacy group Bend the Arc: Jewish Action said in a statement late Tuesday that Trump's remarks were the "words of a scared wannabe fascist , not a president—and Jewish Americans see right through him."

"Trump has repeatedly made it clear that he considers violent white supremacists to be a valued part of his base, even after people are murdered," the group added. "He doesn't just enable white supremacy; it's his platform. Trump's open appeals to white supremacists and his dangerous rhetoric show that this president will do or say anything in his increasingly desperate bid to hold onto power."

Pointing to another telling graphic that circulated among Proud Boys accounts on Twitter, youth-led Jewish advocacy group IfNotNow warned that "Trump is inciting violence from the debate stage."

"During a time when Black people nationwide are exercising their rights to protest police violence and contending with rising levels of racial violence, President Donald Trump used his debate platform to embolden white supremacists by refusing to disavow their activity and by issuing a directive to Proud Boys to 'stand by,'" Kristen Clarke, president and executive director of the Lawyers' Committee for Civil Rights Under Law, said in a statement.

"Even the FBI has identified white supremacy as one of the greatest domestic threats that we face today," added Clarke. "The president's silence and acquiescence present a clear and present danger to Black people, who are most frequently targeted by incidents of hate."

As Ali Breland of Mother Jones wrote late Tuesday, "Trump's decision to not clearly condemn white supremacy and the Proud Boys in particular could have dangerous consequences."

Proud Boys have already exhibited a pattern of violence by routinely assaulting protesters they see as not on their side, often without any physical provocation...

Adjacent extremist groups could also take Trump's refusal to disavow white supremacists as a tacit endorsement. The investigative news site Bellingcat recently reported on a leaked trove of chat messages shared by right-wing activists in Oregon. It includes a message from a user named Paige discussing when would be an appropriate time to use violence: "I'm waiting for the presidential go to start open firing."

Democratic lawmakers joined civil rights groups in condemning Trump's remarks and warning they could spark a wave of racist violence ahead of the November election.