Of Course Donald Trump Got Covid-19

The president’s diagnosis is the culmination of months of failed leadership. 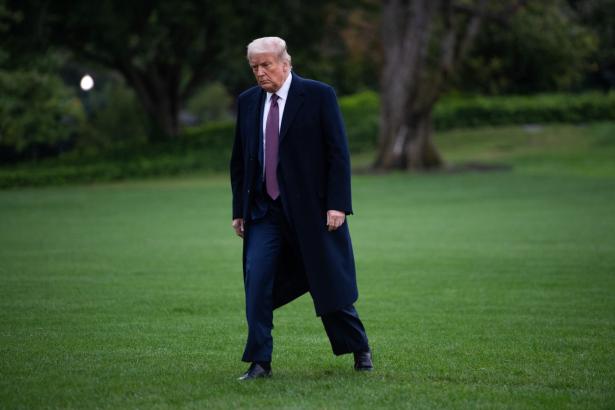 Two days ago, standing on the debate stage with Joe Biden, President Trump repeatedly downplayed the severity of Covid-19. He blew past the fact that more than 200,000 Americans have died from the pandemic in the past year, dismissed the recommendations of top scientists, and mocked his opponent for wearing a face mask. “I don’t wear face masks like him,” Trump said of Biden. “Every time you see him, he’s got a mask. He could be speaking 200 feet away … and he shows up with the biggest mask I’ve ever seen.”

Now, with 32 days to go until the election, Trump himself has Covid-19. He, his wife Melania, and top aide Hope Hicks all tested positive on Thursday night, following a rally during which none of them wore masks. Calling in to Sean Hannity’s show, the president characteristically blamed members of the military and law enforcement for spreading the virus. Later that evening, he tweeted that he and the first lady would be quarantining for the foreseeable future.

Much is already being made about the electoral implications of the president’s diagnosis. There will be no rallies, the lifeblood of his flailing campaign, for at least two weeks and possibly for the rest of the election. Some are already questioning if this could, ultimately, be good for the president. Boris Johnson’s popularity shot up after he contracted the virus in April—could Trump’s do the same? Should Joe Biden shut down his own campaign in deference to the president’s diagnosis?

The political media thrives on these horse-race questions, but they miss the larger point. Trump’s diagnosis is the culmination of months of recklessness and failure, the ultimate, inevitable end of his administration’s disastrous response to a global pandemic. And that is what should be the decisive factor in the election this November.

Over that period, the president spent nearly all of his energy trying to downplay the effects the virus has had on the country—hundreds of thousands dead, millions unemployed. First, as detailed most recently in Bob Woodward’s Rage, he responded by doing nothing. He has said he wanted to prevent “panic,” but it seems abundantly clear that what he really wanted was to prevent a decline in his already dismal political prospects. (It’s a pattern that has played out this week, with White House aides reportedly hoping they could keep news of Hicks’s positive diagnosis from the press.) Fearing that a pandemic would destroy the economy and his best shot at reelection, Trump waffled as cases began piling up. When Covid-19 began to spread, his administration abdicated leadership, leaving governors and state-level officials scrambling.

Preventative measures, notably masks and lockdowns, have been consistently discouraged by the White House. Masks are unmanly, they don’t work; lockdowns are worse than the virus itself. White House staffers notoriously went maskless in deference to Trump’s disdain for masks; according to The New York Times, that has all changed: “Several staff members who have avoided masks were suddenly wearing them.” For the last four months, the president has held large rallies—some indoors, including one that may have led to the death of Herman Cain—despite warnings from experts.

Trump has, throughout, acted as if his political future is more important than the safety of the country. He has not mourned the lives lost or put forth a plan to slow the virus’s spread. Trump has acted as if the virus didn’t exist, as if it couldn’t possibly affect him. It has been a deadly message to his supporters.

Above all, his actions over the past year reflect his extraordinary selfishness and cruelty. Other people get the virus. People in blue states get it. People of color get it. The elderly get it. Donald J. Trump doesn’t get it—he can go about his life however he pleases, ignoring the devastation around him. Even though Hicks was showing symptoms on Wednesday, Trump went to a fundraiser on Thursday, where he did not wear a mask.

Trump has spent his entire life avoiding the consequences of his actions, from his business failures to his toxic politics. That changed on Thursday evening. No one would wish Covid-19 on anyone, not even Trump, but the president has spent months desperately attempting to change the subject. Now, with less than a month before the election, he’s paying the price.

Alex Shephard  is a staff writer at The New Republic. @alex_shephard