Socialists Don’t Want to Destroy Liberalism. We Want to Go Beyond It.

Socialists’ goal isn’t to destroy liberalism, but to transcend its limitations — pairing civil liberties and other liberal rights with a democratic, egalitarian foundation that makes those rights real. 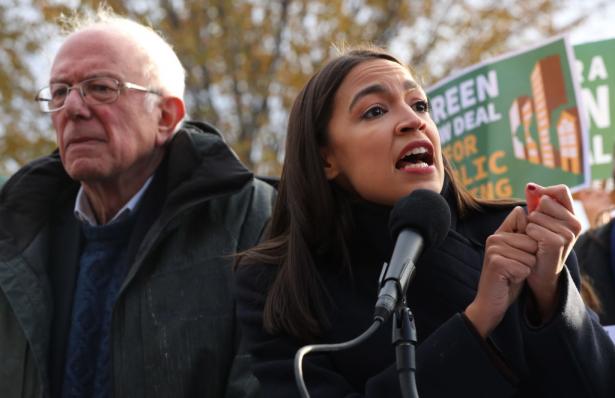 Many socialists have ambivalent feelings about liberalism. Depending on the day, they may see liberals as well-meaning but naive centrists, parroting nice-sounding platitudes but unwilling to mount a serious challenge to the unjust status quo.

But there are deep commonalities between liberalism and socialism, both of which are modernist doctrines emphasizing the moral equality of all human beings. Socialists should have no problem embracing many important liberal principles, while liberals should be open to getting on board with the project of securing the demos’ economic well-being.

Naturally, this doesn’t mean accepting the unimaginative, resigned attitude of centrist Democrats, who assume the best way forward is to go backward to stock neoliberal policies dug up from the Obama years. It means taking what is best in liberalism — its historic defenses of civil liberties and moral equality — and conceptually marrying it to the socialist quest for greater equality in fact.

The perfect union between the two would be a form of liberal socialism that respects basic rights while fostering greater material equality and democratic participation in all spheres of life.

As Thomas Piketty observes in his excellent new book Capital and Ideology, ruling elites across the globe have proven amazingly adept at developing ideological justifications for inequality. These have run the gamut from Aristotelian ruminations about “natural slaves” to religious arguments for the caste and feudal systems to slaveholder defenses of chattel slavery.

More contemporary defenders of hierarchy ask us to look at IQ scores or consider the lobster to rationalize capitalism’s equities. Ludwig von Mises’s 1958 letter to Ayn Rand, who famously dismissed much of humankind as second-handers, is telling:

You have the courage to tell the masses what no politician told them: you are inferior and all the improvements in your conditions which you simply take for granted you owe to the effort of men who are better than you. If this be arrogance, as some of your critics observed, it still is the truth that had to be said in this age of the welfare state.

At their best, liberals pointedly challenged these ideological conceits. They asserted that while individuals may be materially unequal or enjoy different natural abilities, they must be treated as moral equals under the law. This took a variety of philosophical and political forms, from the Kantian claim that each person is an end in themselves, “beyond price,” to the Declaration of the Rights of Man and of the Citizen proclaiming that “men are born free and equal in rights.” So powerful was this sentiment that it gradually eroded many of the archaic and self-serving justifications for hierarchy, putting proponents of stratification on the defensive.

Of course, many liberals have displayed appalling hypocrisies over the centuries. Thomas Jefferson may have declared “all men are created equal,” but as many pointed out, including Benjamin Banneker, a black American polymath and eighteenth-century freedman, he continued to profit from slavery. John Stuart Mill wrote with great force for the liberation of women, but he supported the British colonization of India and was uncomfortable with granting equal votes to the less educated.

James Madison’s writings are a case study in how liberal thinking can betray an antidemocratic bent. In Federalist No. 10, Madison opines that a “pure democracy” would threaten “private property” and even claims the “first object of government” was to protect the “different and unequal faculties of acquiring property.” Too often, liberals — historically more wedded to capitalism than democracy — rushed to the defense of the dominant classes.

But over time the moral legitimacy of basic inequalities came under fire for being contrary to the basic principles of liberal society, often due to the efforts of radicals and the oppressed. One of the big questions of twenty-first-century politics is whether liberalism has gone far enough in achieving equality for all, or whether more fundamental transformation must occur to establish a just society. The answer for socialists is an emphatic “yes.”

Socialism and Equality in Fact

Socialists have always agreed with liberals that every person is morally equal while criticizing liberalism for not going far enough in realizing its egalitarian rhetoric. Formal equality wasn’t enough: a more egalitarian distribution of wealth and resources, enfranchisement, and democratization — these were essential to making “moral equality” meaningful.

Socialists also recognized that these two ambitions — equality in principle and equality in fact — were inseparable. Any effort to achieve the first without the second would inevitably be pushed back by entrenched interests, much as the welfarist accomplishments of the mid-twentieth century were swiftly undone by neoliberalization from the 1980s onward. So, too, with the Supreme Court: as Samuel Moyn and others have argued, it is a bad bet to vest our hopes in the nine robed judges, who save for the brief heyday of the Warren court, have long been a reactionary force.

None of this is to say that liberalism’s greatest achievements should be undone. Many of the basic features of the liberal state should be maintained and expanded, from rights to expression, association, and religion to protection from cruel and unusual punishment and equal treatment under the law. The point is not to destroy liberalism, but to unbound it from its historic association with capitalism in order to transcend its limitations.

Recognizing this is not a purely conceptual matter; it has strategic consequences. Conservative figures like Yoram Hazony and Patrick Deneen have intuited the modernist affinities between liberalism and socialism, even describing a “dance” between the two where progressives pull their liberal counterparts further to the left. Hazony and Deneen’s aspiration is to prevent that from happening, aligning liberals with conservatives by appealing to anxieties about political correctness, rioting, and impending gulags.

Rather than cede liberalism to the political right, socialists should seek to build bridges by stressing our shared commitment to moral equality and freedom, while arguing that those are best preserved and deepened in what might be called a liberal socialist state.

The Case for Liberal Socialism

The idea of liberal socialism has been bandied about for many years, with figures like John Stuart Mill and John Dewey thinking through how to establish greater economic equality while preserving important liberal rights.

Arguably the most prominent figure associated with liberal socialism is John Rawls. In his most famous work, A Theory of Justice (1971), Rawls argues that any just society must seek to secure what he calls the “difference principle” — social and economic inequalities are only permitted if they work to the benefit of the least well-off. Anxieties like wealth maximization or upholding arbitrary hierarchies based on abstract ideas of “meritocracy” aren’t enough to override this fundamental principle, which flowed from Rawls’s conviction that moral persons must treat one another as free and equal.

While A Theory of Justice purported to be neutral on whether capitalism or socialism could better realize the difference principle, Rawls became more assertive near the end of his life. In Justice as Fairness: A Restatement (2001), he insisted that many countries were moving further away from the proper liberal ideal of a just and fair society. Their embrace of neoliberal market ideology meant that the least well-off, far from being treated as free and equal moral persons, were seeing their economic and political power decline.

A just liberal state, Rawls wrote, would have to abandon these market ideologies and progress toward a “property-owning democracy” or “liberal socialism.” This state would respect liberal rights, but would put the means of production to the service of ensuring all individuals, regardless of differences in background or talent, had the resources to pursue a good life.

There are holes in Rawls’s vision, not least of which is his inadequate theorizing about democracy. Socialists have long argued, quite rightly, that any advancement toward economic equality will be exceptionally fragile unless it is accompanied by radical democratic reform that puts power in the hands of ordinary people rather than elites.

But his vision of a just society of moral equals committed to both liberal freedom and socialist equality is genuinely inspiring. It speaks to the intimate, if troubled, connection between socialists and their modernist liberal kin.

Beyond the heady task of theorizing these commonalities, there is plenty we can do in practice. The personal popularity of democratic socialist politicians like Alexandria Ocasio-Cortez and Bernie Sanders with rank-and-file liberal voters is a good place to start. Both have begun the crucial process of articulating their demands for greater equality, dignity, and social protections in the idiom of freedom. (This kind of rhetoric would not be foreign to even a radical egalitarian like Karl Marx, who spent a great deal of time stressing how the free development of one is dependent on the free development of all.)

We can also appeal to the liberal individual’s desire for greater say in the political process by pushing against elite institutions like the Supreme Court, whose justices will be ready to strike down any progressive legislation in the coming years. Socialists and their liberal counterparts would be better off following Immanuel Kant’s sage advice: that a free society is one where the demos gives laws to itself, rather than having them legislated from the bench.

Some might be reticent to take this step, feeling it might involve making too many concessions to liberals — particularly those with calcified elitist inclinations. And that may well be possible. But younger generations are more likely to be open to persuasion and more likely to be moving left. The greater danger is failing to attempt such steps.

Socialists must grow our ranks — but we must also build alliances with potential fellow travelers. At this crucial moment in history, with the political middle cratering and the Right teetering between collapse and seizing long-term power, we can’t afford not to make appeals outside our quarters — and to fly the liberal socialist flag.

Matt McManus is a visiting professor of politics at Whitman College. He is the author of The Rise of Post-Modern Conservatism and Myth and the coauthor of Mayhem: A Leftist Critique of Jordan Peterson.