And Republicans are poised to gain a 6-3 majority on the Supreme Court. 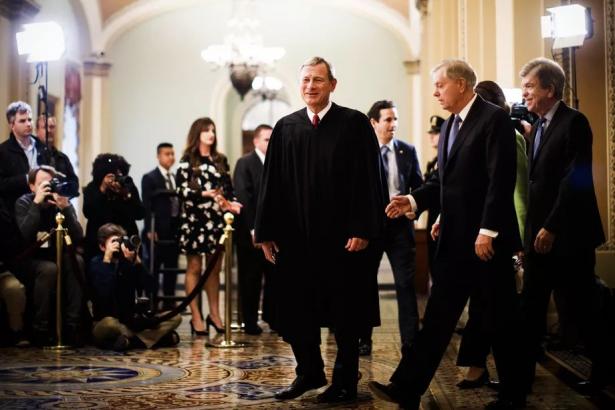 The Supreme Court announced on Friday that it will hear two consolidated cases that could eviscerate the right to be free from racial discrimination in voting. And the Court agreed to hear these cases just weeks before the Senate is likely to confirm Judge Amy Coney Barrett to the late Justice Ruth Bader Ginsburg’s seat on the Supreme Court, giving a Republican Party that is often hostile to voting rights a 6-3 majority on the nation’s highest court.

The cases involve two Arizona laws restricting the right to vote. One law requires ballots cast in the wrong location to be tossed out, while the other prevents individuals from delivering another person’s absentee ballot to the elections office. But as these cases arise under the Voting Rights Act — a seminal law preventing racist voting laws, that the Supreme Court has already weakened considerably — they provide a conservative-majority Supreme Court the opportunity to dismantle what’s left of the Voting Rights Act.

Early Friday morning, the White House revealed that President Donald Trump tested positive for Covid-19. But that news will, at most, impact just one presidential election. The Court’s decision in the Democratic National Committee cases, by contrast, could fundamentally reshape all elections moving forward. It could allow racist voter discrimination to run rampant throughout American democracy. And it potentially endangers the ability of the Democratic Party, with its multiracial coalition, to compete in all future elections, at least at the national level.

We cannot know yet what the Supreme Court will do in this case. Perhaps two Republican justices will get cold feet and agree to save the Voting Rights Act. Or perhaps Democrats will win a landslide victory in the upcoming election and pack the Supreme Court with additional justices — stripping the GOP of its Supreme Court majority in the process.

Barring such events, however, American democracy is in terrible danger. The Supreme Court’s decision to hear the Democratic National Committee cases could threaten the fairness of American elections for years to come.

The specific issue in the Democratic National Committee cases concerns two Arizona laws that require certain ballots to be discarded. One law requires voting officials to discard in their entirety ballots cast by voters who vote in the wrong precinct (rather than simply not counting votes for local candidates who the voter should not have been able to vote for).

The other law prohibits “ballot collection” (or “ballot harvesting”) where a voter gives their absentee ballot to a third party, who delivers that ballot to the election office. (Arizona is one of many states that impose at least some restrictions on ballot collection.)

Both of these laws disproportionately disenfranchise voters of color. As a federal appeals court explained in an opinion striking down the two laws, “uncontested evidence in the district court established that minority voters in Arizona cast [out of precinct] ballots at twice the rate of white voters.” And Hispanic and Native American voters are especially likely to rely on a third party to ensure that their ballot is cast.

One reason for this disparity is that some parts of the state require voters to cast their ballot in counterintuitive locations. Some Maricopa County voters, for example, were required to “travel 15 minutes by car (according to [G]oogle maps) to vote” in their assigned polling location, “passing four other polling places along the way,” according to an expert witness.

In addition, according to the appeals court, many Arizona voters of color lack easy access to the mail and are unable to easily travel on their own to cast a ballot. As the appeals court explained, “in urban areas of heavily Hispanic counties, many apartment buildings lack outgoing mail services,” and only 18 percent of Native American registered voters have home mail service.

Meanwhile, Black, Native, and Hispanic voters are “significantly less likely than non-minorities to own a vehicle” and more likely to have “inflexible work schedules.” Thus, their ability to vote might depend on their ability to give their ballot to a friend or an activist who will take that ballot to the polls for them.

The legal rules implementing the Voting Rights Act are complicated. And the specific legal rules governing these cases are impossible to summarize in a concise way. Courts have to consider myriad factors, including “the extent of any history of official discrimination” in a state accused of violating the Voting Rights Act, and “the extent to which voting in the elections of the state or political subdivision is racially polarized.”

In any event, a majority of the appeals court judges who considered Arizona’s two laws determined that they violate the Voting Rights Act.

Much of the Voting Rights Act no longer functions due to conservative decisions weakening that law. But at least one important prong of the law remains intact and continues to provide a meaningful shield against racist voting laws. The Democratic National Committee cases endanger this remaining shield.

Less than a decade ago, the Voting Rights Act provided three protections against racist voter discrimination. Section 5 of the law required states with a history of racist voting practices to “preclear” new election rules with officials in Washington, DC. Meanwhile, Section 2 of the Voting Rights Act provides two separate protections against voter discrimination. It prohibits election laws enacted with racially discriminatory intent, and it also prohibits any state law that “results in a denial or abridgement of the right of any citizen of the United States to vote on account of race or color.”

But the Supreme Court’s decision in Shelby County v. Holder (2013) effectively deactivated Section 5’s preclearance regime. And the Court’s decision in Abbott v. Perez (2018) held that lawmakers enjoy such a strong presumption of racial innocence that it is now extremely difficult to prove that those lawmakers acted with racist intent — so difficult that it may be impossible except in the most egregious cases.

The two Democratic National Committee cases involve the third prong of the Voting Rights Act: the so-called “results test” that prohibits many election laws that disproportionately disenfranchise voters of color.

As a young lawyer working in the Reagan administration, Chief Justice John Roberts unsuccessfully fought to convince President Reagan to veto the law establishing this results test; some of his memos from that era even suggest that the results test is unconstitutional. And Roberts is, if anything, the most moderate member of the Supreme Court’s Republican majority.

Now that these cases are before the Supreme Court, in other words, the Court’s Republican-appointed majority could potentially dismantle the results test. At the very least, it could water down that test to such a degree that it no longer provides a meaningful check on racism in elections.

Simply put, the right of voters of color to cast a ballot is now in greater peril than at almost any point since the Jim Crow era. Cases like Shelby County and Perez already stripped the Voting Rights Act of much of its force; the Democratic National Committee cases could finish that job.

Because voters of color in general, and Black voters in particular, are especially likely to vote for Democrats, Republican lawmakers can use race as a proxy to identify communities with large numbers of Democratic voters. They can then enact election laws targeting those communities, confident that the law will mainly disenfranchise Democrats.

The Court’s decision to take these cases, in other words, puts the debate over whether Democrats should add additional seats to the Supreme Court in order to dilute its Republican majority into stark relief. If the Democratic National Committee cases end badly for the Voting Rights Act — and if Democrats control Congress and the White House when these cases are handed down — Democrats may have to choose between radical steps like packing the Court or being permanently exiled to the political wilderness.

Ian Millhiser is a senior correspondent at Vox, where he focuses on the Supreme Court, the Constitution, and the decline of liberal democracy in the United States. Before joining Vox, Ian was a columnist at ThinkProgress. Among other things, he clerked for Judge Eric L. Clay of the United States Court of Appeals for the Sixth Circuit and served as a Teach For America corps member in the Mississippi Delta. He received a B.A. in philosophy from Kenyon College and a J.D., magna cum laude, from Duke University, where he served as senior note editor on the Duke Law Journal and was elected to the Order of the Coif. He is the author of Injustices: The Supreme Court's History of Comforting the Comfortable and Afflicting the Afflicted. His reporting is partially supported by a grant from the New Venture Fund.