In real life, "leaderlessness" simply allows the loudest voices, the most charismatic, the most manipulative, and the most threatening, to dominate and intimidate everyone else — with no accountability at all. 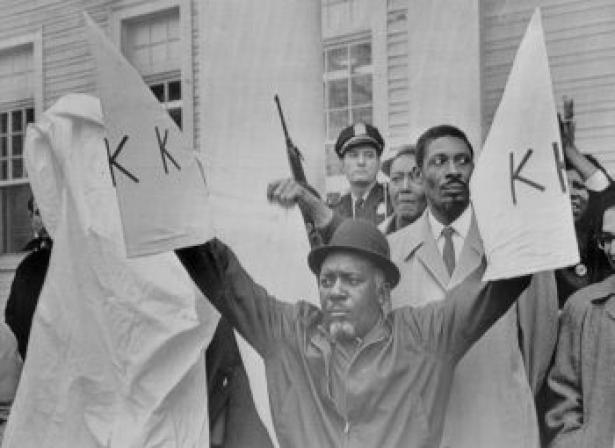 I've been thinking about self-defense, agent provocateurs, nonviolence, and the hard lessons we learned in the 1960s and then the '70s.

Many of us refer to the Civil Rights Movement as the "Freedom Movement" because it was about so much more than just a limited set of legal rights. But regardless of name, everyone knows that our movement achieved significant milestones through the strategic use of nonviolence. What's not so well known is that when threatened by white-terrorism the movement paired nonviolence with armed self-defense (though we didn't flaunt it).

I'm a firm proponent of tactical nonviolence as the strategy for building mass movements to win social justice. I've posted articles about it on this website. But I'm alive today to write those pieces because men and women with rifles guarded civil rights workers like me as we slept at night and as we worked in our offices and freedom houses. Even Dr. King, who would not pick up a gun himself, acknowledged a community's right to defend itself against white vigilantes and Klan terrorists. On occasion, during periods of particular peril, I carried a pistol in my pocket when traveling those back roads of Mississippi and Louisiana. Fortunately, I never had to use it.

In June of 1966, a white-racist named Aubrey Norvell stepped out into plain sight and shot James Meredith as he walked by the side of the road. Police who were present to arrest Meredith if violated a single traffic law did absolutely nothing to protect him. We took up his march from the spot where he was gunned down. For 18 days we nonviolently marched without weapons through the heart of Klan territory in Mississippi. We did so in safety because night and day we were guarded by the Deacons for Defense and Justice, a Black organization formed to defend Afro-American communities and nonviolent protesters (both Black and white) from the Ku Klux Klan.

The Deacons were not provocateurs. They didn't brandish or flaunt their weapons, speak bombastically, or engage in macho posturing. Nor did they push themselves in front of TV cameras or get into shouting-match confrontations with racists. In fact, most of the time they blended in among the onlookers so well that no one knew who they were — and they weren't saying.

The Deacons were both strategic and disciplined. Their purpose was to deter, and if necessary defend against, white-terrorism. But they did not wage wars they could not possibly win against cops or government. They were very clear, our job was to nonviolently carry forward a political movement for social justice and their job was to see that we lived long enough to achieve success.

When a heavily-armed battalion of Mississippi Troopers savagely assaulted us in Canton Mississippi, the Deacons had the self-discipline to strategically withdraw. Though I was one of those beaten and gassed, I was thankful they did so because the Troopers were armed with rifles and machine guns that they were itching to use. Had a Deacon shot at one of them, there would have been a bloodbath. A massacre that the local movement would not have survived — and neither would a great number of marchers like me.

When the student sit-ins triggered a social revolution now known as "the sixties," the ruling elite rushed to defend their power, profits, and privileges with their traditional tactics of economic-retaliation, state-repression, and terrorist-violence. But nonviolent movements of defiant racial minorities, rebellious women, and disaffected youth used their excesses against them. So as the '60s evolved into the '70s, the forces defending the status quo became more sophisticated. One of the techniques they began to employ were agent provocateurs:

Someone who commits illegal, rash, or alienating acts that provoke popular-revulsion, legal-repression, or police-suppression against a labor union, political organization, reform movement, or nonviolent protest. Someone who encourages or tricks others into committing such acts.

Agent provocateurs manipulate, bait, and guilt-trip activists into ever more extreme and alienating positions and actions to ensure that media focus is on the provocations rather than the issues protesters are trying to build public awareness of. Provocateurs undermine popular support, isolate those demanding change, validate right-wing politicians, and justify heavy- handed state-repression. I know that because for awhile in the late '60s, I fell for their tricks — which I came to deeply regret.

The wealthy and powerful are usually able to conceal their use of agents provocateurs — but not always. See, for example: Todd Gitlin's 2013 article in the Nation or a more recent piece by Emile Schepers in the leftist People's World. Or references in popular culture such as John Sayles' great film Matewan, about the sabotage of a West Virginia coal miners strike, or A Show of Force which is loosely based on the Cerro Maravilla plot where an undercover cop enticed two young Puerto Rican independence activists into a fatal police ambush which, when the cover-up failed and the facts became known, resulted in Governor Romero Barcels's party being voted out of office.

In reality, however, very few provocateurs are agent provocateurs. Most provocateurs act on their own out of their personal beliefs. But their self-motivation does not reduce the damage they do to popular movements or the political aid they provide to Trump, Republicans, law-enforcement, and the corporate and political enemies of freedom, justice and equality. Make no mistake, their extreme positions, violent rhetoric, broken windows, firebombs, burning cop cars, and physical assaults do nothing to deter police killings, corporate crimes, environmental destruction, or attacks on democracy — just the opposite.

It is a truism of human behavior that what we fear we come to oppose — and then to hate. Those who act out their rage with provocative violence and misdirected property-damage frighten the very people whose support we need. A recent AP poll, for example, reported an across-the-board decline in support for protests against police violence, down overall from 54% in June to 39% in September. Support among Blacks fell even more, from 81% to 63%. The main reason given by those who changed their opinion, including Afro-Americans, was violence and destruction on the part of the protesters.

Provocateurs defend themselves and their actions with the catch-phrase "diversity of tactics" because, of course, we're trying to build a diverse, multicultural, America and successful mass movements always use a wide variety of tactics. So the concept of diversity of tactics is a valid and positive one — when it's real.

But valid diversity of tactics rests on two foundations. The first is that the various tactics actually support the shared goals. A tactic that is destructive of those goals is not "diversity," it's sabotage. When nonviolent students were physically attacked and arrested for sitting-in at lunch counters they won public sympathy and mass support. But if they'd smashed the dishes and spray-painted graffiti on the counters, the effect would have been just the opposite.

The second foundation is that everyone really is trying to achieve the same goal. When a thousand nonviolent marchers are denouncing police racism and demanding changes in the justice system, but 50 provocateurs in their midst are engaged in violence because they want to overthrow all forms of government to create some form of theoretical anarchy, those are not the same goals. What they're doing isn't "diversity of tactics," it's hijacking a protest for their own ends. Destructively so, because many people will not participate in a demonstration if they believe their message will be hijacked by a small number of provocateurs with whom they profoundly disagree.

The First Amendment guarantees us freedom of speech — the right to say whatever we want to say. It also guarantees us the right not be forced to say something we don't want to say. That's why you can't be forced to recite the "Pledge of Allegiance" or participate in prayer at school, in a courtroom, or on the job. A protest is a form of speech, it's a kind of living message, and the tactics and methods of the protest are integral components of the message. So those who call for a nonviolent protest have a legal and moral right to insist that their message not be hijacked by provocateurs.

Today our democracy is under imminent threat. We must defeat Trump/Republicans at the polls on election day and if they refuse to honor the will of the voters we must use every effective tactic at our disposal to block their coup. Inevitably that will have to include massive street protests. But provocateurs and the negative effect they have on public opinion aid Trump, divert attention from the issue, and weaken the effectiveness of our demonstrations. Moreover, many people who may be willing to risk Covid won't join protests if they fear that provocateurs are going to involve them in violence, deliberately incite police attacks, or hijack the demonstration for their own purposes.

During the '60s, and even more so in the '70s, we knew the danger that provocateurs posed. We planned, prepared, and trained to counter and minimize their damage:

Of course, the methods noted above assume that protest organizers are willing to step up and take on a visible leadership role, and that those joining the demonstration have the self-discipline to accept that leadership. Back in the day, that was not much of an issue; hard experience had taught us the necessity of self-discipline. But today, when protests are anonymously organized over social media, that may be more difficult to achieve. Yet as we see in Hong Kong and other places, well-led, tactically-sophisticated, mass actions can be organized over social media. There's no reason that can't be done here.

And let's be clear about another thing, "everyone do your own thing" is not the pinnacle of democracy — just the opposite. In real life, "leaderlessness" simply allows the loudest voices, the most charismatic, the most manipulative, and the most threatening, to dominate and intimidate everyone else — with no accountability at all. Bottom line: Freedom ain't free, because sometimes we have to accept the self-discipline necessary to collectively defend it.

From 1963-1967, Bruce Hartford was a Civil Rights Worker with CORE in California and then in Alabama and Mississippi on the staff of Dr. King's organization the SCLC. Later he was a student activist at San Francisco State College,then a freelance journalist covering the Vietnam War, and then an ILWU chief shop steward in the 1970s. He was a founding member and long-time officer of the National Writers Union in the '80s and '90s. Today he is webmaster of the Civil Rights Movement Archive (crmvet.org), on the board of the SNCC Legacy Project, and a local leader of an Indivisible chapter. He is author of, "The March on Washington for Jobs and Freedom" (2012), "The Selma Voting Rights Struggle & the March to Montgomery" (2014), "Voting Rights in America -- Two Centuries of Struggle" (2018), and "'Troublemaker' Memories of the Freedom Movement" (2019).
Copyright © Bruce Hartford, 2020
Thanks to the author for submitting this article. -- moderator