Tribal sovereignty and the well being of Native people hinge on the outcome of the 2020 elections. Yet, voter suppression, the fractured relationship with the major political parties and the US government continues to disenfranchise Native voters. 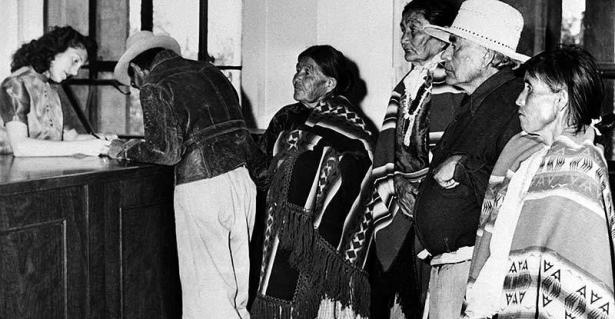 Diné (Navajo) voters registering to vote in 1948. Native voting was barred in several states until the passage of the Voting Rights Act in 1965., Public Domain

The Native vote is vital in the 2020 election because our tribal sovereignty, lands, water, and the well-being of our people hinge on the outcome. But the Native vote is the most difficult vote to win. To understand why, we have to discuss the complex history of Native citizenship and voting rights to know how they continue to impact our current political realities.

According to the 2010 census, 5.2 million people identified as Native American or Alaskan Native, meaning that the entire Native population accounts for just under 2% of the U.S. population. It's essential to understand that the Native population's size directly correlates to the misrepresentation and underrepresentation of Native people when it comes to U.S. politics.

It is no mistake or coincidence that the misrepresentation and underrepresentation that we face stem from the inherent anti-Native policies that not only contributed to the decimation of our population but continue to disenfranchise Native voters. After all, it's only been 96 years since all Natives gained U.S. citizenship through the passing of the Indian Citizen Act of 1924. Before enacting the ICA, the U.S. had only extended citizenship to Native people under exacting terms. For example, in 1830, the Treaty of Dancing Rabbit Creek granted citizenship to Mississippi Choctaws that chose not to leave their ancestral homelands under the Indian Removal Act, if they agreed to register for land allotments and maintained a residence on that land for five years.

"They [the Indian tribes] may without doubt, like the subjects of any foreign government, be naturalized by the authority of Congress and become citizens of a state and of the United States, and if an individual should leave his nation or tribe, and take up his abode among the white population, he would be entitled to all the rights and privileges which would belong to an emigrant from any other foreign people."

Let that sink in for a moment and try to understand what Native people were expected and forced to sacrifice to be citizens, to have basic human, land, and water rights on our own lands.

The Treaty of Dancing Rabbit Creek didn't just grant Choctaws a pathway to citizenship or allow them to maintain their ancestral homelands. The Treaty of Dancing Rabbit Creek ceded 11 million acres of their lands in exchange for a promised 15 million acres in Indian Territory, now known as Oklahoma. It was a compromise meant to make removal easier for the U.S government, and it did. In 1831, the first Choctaws to be removed began their journey from Mississippi to the Indian territory, which ushered in the beginning of the Trail of Tears. In the 10 years following, the Choctaws, who remained in Mississippi, were harassed, abused, and murdered. The land allotments and citizenship promised tied up in legal conflicts to intimidate and push them out because, at this point in our history, the mindset was not to include Natives; it was to eradicate the "Indian Problem."

In 1924, when the U.S. government enacted the Indian Citizenship Act, it wasn't because of a moral awakening. It was because they could no longer deny citizenship to Native people without drawing the U.S. public and foreign allies' ire after the significant contributions and sacrifices that Native communities made for the U.S. during World War I. While the U.S. could no longer deny citizenship, they did hope that it would forcibly assimilate Natives into American society. They also intentionally excluded the guaranteed right to vote, leaving it up to the states to decide. The guaranteed right to vote was a 40-year battle that Natives had to fight state by state, but the victory was never cut and dry. Despite winning the right to vote, voting was nearly impossible because of literacy tests, poll taxes, and violence meant to intimidate and prevent them from voting.

It wasn't until the Voting Rights Act was passed in 1965 that Natives could exercise their right to vote more freely.

However, in 2020, voter suppression is still rife within Indian Country. Voter suppression is a huge hurdle, but political parties and their candidates and the state of the fragile Nation-to-Nation relationships that we have with the U.S. government have further disenfranchised Native voters.

According to the National Congress of American Indians, 34% or roughly 1.2 million Natives are not registered to vote, and voter turnout ranges from 1-10% lower than other racial/ethnic groups. There are many barriers that Native communities face that also contribute to this, such as the lack of transportation to and from polling stations and voter ID laws that prevent Natives living in rural communities that don't have traditional addresses from registering to vote. But these obstacles pale in comparison to the tactics of political parties and candidates to win the Native vote and the rebelliousness of potential Native voters choosing to abstain because they do not want to be complicit in a political system that seeks to oppress and eradicate their existence.

They aren't wrong. Natives choosing to abstain from voting are not naive or misguided. Their reasons are valid because history, past and present, continues a pattern of anti-Indigeneity through local, state, and federal policies that promote the segregation, assimilation, integration, expulsion, and extermination of Indigenous peoples. There hasn't been a year in our history when we haven't been fighting for fundamental human rights or fighting for our land and water. Our realities and histories are why election years are hard for a lot of Native people. We see through the hype and will not be swayed by empty promises or catchy platitudes.

Neither candidate is ideal for Indian Country or even the Nation. But only one is hell-bent on destroying what little progress we have made in the last 244 years...

Especially in this election year, when we must choose between two presidential candidates who have engaged in problematic and violent behavior towards women and Native communities. We need the Native vote, but to encourage that vote, we need to be honest.

Neither candidate is ideal for Indian Country or even the Nation. But only one is hell-bent on destroying what little progress we have made in the last 244 years for (Black, Indigenous, and other Peoples of Color) BIPOC and marginalized communities. Only one is sowing division and enacting violence upon U.S. citizens for exercising their constitutionally protected rights. Only one is seeking to destroy the possibility of life, liberty, and justice for all.

We need to block out the voices trying to put a positive spin on the choices before us and trying to convince us that they have our best interest at heart. We need to be unflinchingly honest, critical, and hold them accountable for their behavior and policies.

We need to vote, knowing that regardless of who wins, we will still be fighting against the policies and injustices of the next administration. We will still be taking to the courts and to the streets to fight for equality, justice, and the better world we know is possible.

Vote because even in that future, our vote will still be our power.

[Johnnie Jae (Choctaw and Otoe-Missouria) is the founder of A Tribe Called Geek, an award-winning media platform for Indigenous Geek Culture and STEM. She is a co-founding board member of Not Your Mascots and LiveIndigenousOK.]