Trump’s Minnesota Visit had Him Acting Like a Proud Boy

Amid “white power” chants and maskless rallies, the President spreads hate (and likely COVID-19) during Minnesota fundraiser and campaign rally. 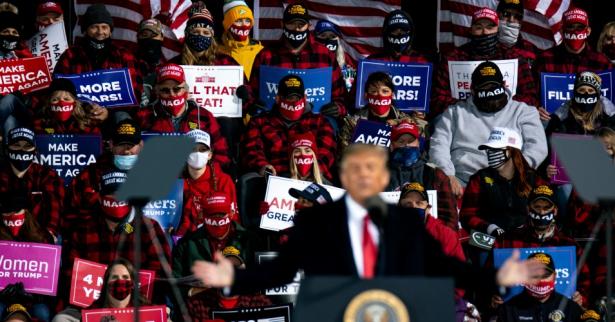 When President Trump visited Duluth, Minnesota, recently, he left more than a possible exposure to the coronavirus in his wake. He unleashed a new wave of racist expression and violence.

Trump flew to Minnesota to attend both a campaign rally and a private fundraiser on September 30, the day after his contentious debate with Democratic nominee Joe Biden. In that debate, Trump was not only unwilling to denounce white supremacy, but he also drew condemnation for saying that the Proud Boys should “stand back and stand by,” rather than cease operations immediately.

The Proud Boys is a hate group aligned with the racist alt-right, according to watchdog organizations such as the Southern Poverty Law Center.

Trump later claimed he doesn’t know who the Proud Boys are—a notion as alarming, perhaps, as his unwillingness to clearly reject their actions and ideology. Democratic vice presidential nominee Kamala Harris might have said it best when she characterized Trump’s debate performance as a “dog whistle through a bullhorn.”

Somehow, after a summer of uprisings and unrest in the wake of George Floyd’s death in Minneapolis, Trump still can’t find the words to condemn violent, racist, and misogynistic groups like the Proud Boys.

He carried his belligerence with him to Minnesota on September 30, just hours before he was  diagnosed with the coronavirus. Trump has made it very clear that he intends to become the first Republican to carry Minnesota since Richard Nixon won the state in the 1972 presidential election.

And he apparently plans to do so by acting—in terms of his public rhetoric, anyway—like a Proud Boy.

Trump’s first post-debate stop in Minnesota was at a private home in Shorewood, a wealthy suburb west of Minneapolis. There, forty Trump supporters, some paying $100,000 to attend, mingled with the President at the home of a local business owner.

South Dakota Governor Kristi Noem, a Republican whose state has seen a huge increase in COVID-19 cases recently, was reportedly in attendance.

Trump then flew to northern Minnesota to hold a rally at the Duluth International Airport. What followed was a racist, xenophobic display, captured most shockingly, perhaps, by Trump’s declaration that, “Biden will turn Minnesota into a refugee camp.”

All the refugees Biden will let in, Trump told the crowd of chanting supporters, will “overwhelm public services.” Never mind, of course, that he was soon to be treated to a round of socialized health care at the Walter Reed National Military Medical Center due to his COVID-19 diagnosis.

We could look away, and chalk Trump’s continued attacks on Minnesota’s refugee community up to little more than a campaign shtick designed to rile up his base of supporters.

But that would be a terrible mistake. In the hours after Trump’s rally, when he had long since departed for the taxpayer-funded confines of the White House, numerous attacks against women and the media were reported in Minnesota.

Here is a taste of what Minnesotans were left to deal in the wake of Trump’s visit:

Dymanh Chhoun, a photojournalist for the local CBS affiliate, was getting ready to cover the Duluth rally when a Trump supporter punched him. The confrontation occurred as Biden and Trump supporters squared off before the rally began.

Earlier this summer, Chhoun was sprayed with tear gas while filming protests in Minneapolis in the wake of George Floyd’s killing. His eyes scrunched up in pain, Chhoun kept his camera focused on a man, later identified as a member of a white supremacist group, who was seen breaking windows and inciting violence aross from the police department’s Third Precinct station.

Later, Duluth’s Democratic mayor, Emily Larson, reported that a group of vehicles bearing Trump flags attempted to “bully and intimidate” her on Friday, two days after the President’s campaign stop.

On the day Trump appeared in Duluth, Larson had referred to him as a “white supremacist” bent on putting area residents in harm’s way by carrying on with a maskless public rally in the middle of a pandemic. Her concern was later validated by Trump’s positive coronavirus test, as well as the lingering uncertainty around exactly when he became aware of it.

Then, on October 1, Qorsho Hassan, Minnesota’s current Teacher of the Year, reported that she had been in Duluth just days before Trump’s rally. While there, she said in a statement, a group of white men in a pickup truck circled around her, shouting “white power” and Trump campaign slogans.

These incidents follow Trump’s appearance in Bemidji, Minnesota, on September 25. There, he stopped at nothing to stoke racist fears, asking the crowd gathered before him if they were “having a good time” with Minnesota’s refugees.

Outlets including Rolling Stone also reported that Trump expressed glee at the Bemidji rally over the way NBC journalist Ali Veshi was hit by a rubber bullet while reporting on the unrest in Minneapolis during the summer.

Trump called Veshi’s injury a “beautiful thing,” according to a New York Times report. But his rhetoric, like Veshi’s encounter with the rubber bullet, is anything but beautiful.

Sarah Lahm is a Minneapolis-based writer and researcher. Her work has appeared in outlets such as The Progressive, where she writes the Midwest Dispatch column and contributes pieces to the Public School Shakedown site.

The Progressive was founded in 1909 to be a voice for peace, social justice, and the common good—but we’re not resting on our laurels. For more than 110 years, The Progressive has been on the frontlines—advocating for peace, gender and racial equity, fair labor practices, environmental safeguards, and keeping elected officials and corporations in check. We don’t rely on the billionaire class to fund the type of hard-hitting journalism we set out to do.

Rather, we depend on people like you. Reader support makes up more than half of our budget, Your support allows us to dig deep on the stories that matter most.If you value what you get from The Progressive, please join us and make a tax-deductible donation today so we can continue producing a high-quality print magazine, daily web stories and columns, and other important work, including helping to train new generations of journalists. DONATE!