Seed the Vote brings together progressive anti-fascist, anti-Trump forces in several ways. Seed the Vote provides the scheduling, training, and infrastructure. "Plant the seed for the kind of democracy we want to be building together.” 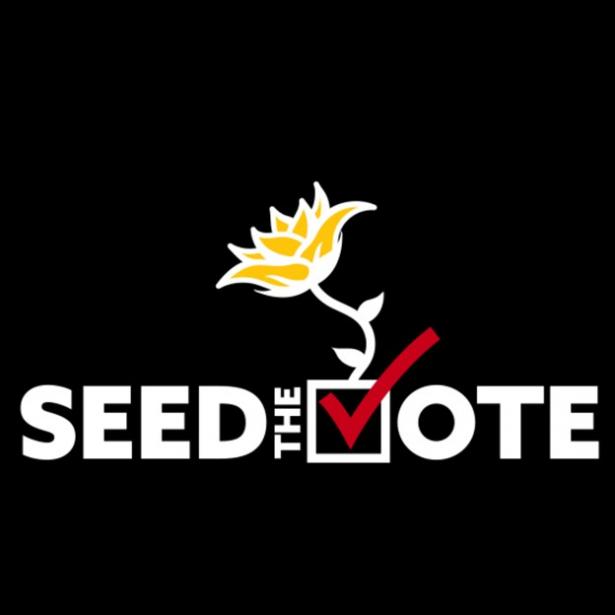 Early voting is already underway: Election Day is every day from now until Nov. 3. Seed the Vote has activists on the (virtual) ground seven days a week in swing states, and soon will add in-person crews as well. Partnering with organizations rooted in working-class communities and communities of color, Seed the Vote aims to build connections and capacities that will last past November, while pitching in on the all-important fight to defeat Trump. Its thinking is both granular and global. Coordinating Committee member Le Tim Ly:

“There’s this question of what we do inside the empire: What is our responsibility to movements and people around the world to create the best possible conditions for our side to win? Seeing the work of defeating Trump in that context is important, to check our privileges and not let down our responsibility to the most targeted and vulnerable in our communities, to the generations who come after us and to the work that’s happening across the world to combat neoliberal fascism and support people’s struggles.”

THE CRISIS AND THE MOVEMENT COLLIDE

Seed the Vote’s organizers brought with them decades of experience in weaving together electoral work and community organizing. They had helped build the San Francisco Rising Action Fund and Bay Rising Action to amplify the voices of low-income communities and communities of color in local and regional elections. By July 2019, the depth and ferocity of the Trumpist attack made national work imperative. “The crisis and the movement are colliding,” said Emily Lee, a co-founder of Seed the Vote. After many informal conversations, Lee and others who would form the core of Seed the Vote got together to discuss how they could organize around the presidential election in a way that would both fight the right and build the left.

FIGHT THE RIGHT, BUILD THE LEFT

Before they began making work plans, the core spent a few months developing the political assessment that would guide them. They shared their thinking in December 2019:

“We identified defeating Trump and the GOP in the 2020 elections as an absolutely key step in beating the racist, authoritarian right wing. In addition, we must do a set of other things to build the left: strengthen unity and ties among different social justice organizations, build the influence of left ideas and a progressive program, and increase our numbers. Positioning the social justice forces within the massive opposition to Trump, including the electoral opposition, gives us the best chance to do those things.”

Seed the Vote’s analysis puts those hardest hit by Trumpism at the core of the effort to defeat it and build the left. Overlaid on the map of battleground states, it guided the project’s engagement strategy. Under the auspices of the Everyday People PAC, Seed the Vote and its sibling organization, Generation Rising, began to make plans. (Generation Rising, profiled here, organizes and trains young BIPOC for leadership in electoral work.)

At first, Seed the Vote planned to send delegations from the Bay Area to spend two weeks in Arizona in October 2020. Volunteers would work with LUCHA, an organization galvanized in the resistance to Arizona’s notorious anti-immigrant legislation, the 2010 “Show Me Your Papers” bill, SB 1070. The coordinating committee was set to go to Arizona to do more in-depth visioning and planning in mid-March. But their flight got cancelled when shelter-in-place started, and Seed the Vote had to get creative. It went virtual and expanded its reach, opening to volunteers from all over the country and adding new organizing partners.

Looking to the swing states of Florida and Pennsylvania, Seed the Vote reached out New Florida Majority and Pennsylvania Stands Up. Not only did they share politics, but they had relationships in each group through activists who had previously worked in the Bay Area.

“Between March and June, our partner organizations were swamped with working on their primary elections, dealing with COVID, and mobilizing in response to this incredible movement moment and racial reckoning we were in as a country,” Coordinating Committee member Jill Shenker said. Seed the Vote re-tooled and held three political education sessions to pull together a first cohort of volunteers. (Videos from the sessions are available here.) June phone banks began with wellness checks, helping connect people with resources and with the partner organizations.

Seed the Vote brings together progressive anti-fascist, anti-Trump forces in several ways. Individuals can sign up for phone banks with partner groups. Organizations can form “branches” so people can call together and stay connected to their political home. Seed the Vote provides the scheduling, training, and infrastructure. Activists can also form “Seed Pods,” groups of family and friends who call together, with similar support.

“I started a seed pod for myself and friends mostly because I thought it would be fun to work with people I knew,” said volunteer Shunya Anding. “They were hesitant about getting into conversations and persuasion, so I’ve talked to them about it. Most of them probably wouldn’t be calling otherwise.” The pod gives a sense of camaraderie and support: members get on Zoom and call at the same time, with breaks in the middle of their stint and a debrief at the end.

Larisa Casillas is co-leading a pod with two other longtime social justice activists. “Our worlds overlap, but not so much, so we get to meet new people. It seems like a great opportunity to build community,” she said. “I’m drawn to the idea of the election as an opportunity to bring our people in, to organize folks. And by working with Seed the Vote, we’re not only calling around the elections, but also supporting the movement building that’s happening in Florida on the ground. That’s why I was attracted to it, because it felt movement-oriented.”

In August, the number of Seed the Vote volunteers and phone bank shifts more than doubled, and new cooperative and coalition efforts sprouted. Seed the Vote joined the United Against Trump coalition in a virtual rally during the Democratic Convention, and is offering opportunities to volunteer with other coalition groups. It’s coordinating with movement networks like the Center For Popular Democracy Action Fund and People’s Action on phone banks to Wisconsin, Michigan and Pennsylvania. It co-hosted a town hall with People’s Action to lift up the “deep canvassing” that network is using successfully to reach out to conflicted voters.

All this collaboration builds the movement’s connective tissue—through relationships among people who call together, and among likeminded groups regionally and nationally. “We can move at the speed of trust,” Ly said. “That practice builds trust over time so we can grow more nimble and powerful.”

By late September, Seed the Vote had 3,500 volunteers – 700 calling Florida on one day. The group has started discussing election defense, and is collaborating with Protect the Results and The Frontline, but most of its effort is concentrated on winning the biggest victory possible Nov. 3. For the final pre-election push, the group is returning to its original vision of sending delegations out of state. It’s gathering volunteers to support canvassing in Arizona with LUCHA and UNITE-HERE Local 11, in Florida with New Florida Majority, and in Pennsylvania with the Working Families Party. Organizers in those three states have already been door-knocking, working under COVID-safety protocols developed and reviewed by public health professionals – and nothing can replace in-person connections.

Those conversations are especially crucial for reaching people whose names don’t show up on lists because they’ve never voted. Florida has four million young people and people of color who are eligible to vote and not registered, or registered but not voting. Pennsylvania will have 17 early voting centers, where people can register and vote on the same day up to the Oct. 19 registration deadline.

Arizona, Florida, and Pennsylvania can each be pivotal in the presidential election, and in each one Seed the Vote partners are working on down-ballot races by candidates they believe will be reliable allies in building power. “If you can take a week off and go to one of these places, do it,” Ly urged.

Seed the Vote’s Political Education Committee has developed a series of info sessions to give volunteers a sense of the political contexts in the places they will be calling or visiting. At the September 23 session, New Florida Majority Organizing Director Serena Perez gave a quick sketch of that state’s complex demographics and politics.

New Florida Majority and its allies have registered tens of thousands of low-income voters and voters of color in the last several years. In 2018 they helped win passage of Amendment 4, which would have restored voting rights to 1.4 million people formerly incarcerated for felonies. The Republican legislature undermined that with a requirement that all fines and fees be paid before restoration. The U.S. Supreme Court has let this modern-day poll tax stand. Florida’s Trump-like governor, Ron DeSantis, proposes to charge many protestors with felonies; waive liability for motorists who drive into crowds in “self-defense”; and block state aid to cities that vote to defund police.

In breakout groups and then together, attendees digested this reality and discussed how the phone-banking they were doing could help to change it. Experience and ideas bubbled up. They are boosting voter turnout. Reaching people who don’t often get listened to, sharing hopes for families and communities that could be realized with people’s governance. Building solidarity across state lines. “This work that Seed the Vote is doing with our partner groups plants the seed for the kind of democracy we want to be building together,” Political Education Committee co-coordinator Jazmín Delgado said.

Ready to Seed the Vote? Sign up here or go to https://seedthevote.org for more information.

Marcy Rein is a writer, editor, and organizer who has engaged with a wide range of social movements and organizational forms. She co-authored Free City! The Fight for San Francisco’s City College and Education for All (with Mickey Ellinger and Vicki Legion), forthcoming from PM Press in Fall 2020; with Clifton Ross, she co-edited Until the Rulers Obey: Voices From Latin American Social Movements (PM Press, 2014).