film 'They Refused to Act': Inside a Chilling Documentary on Trump's Bungled Covid-19 Response

Totally Under Control recounts the early days of the pandemic in the US, revealing in clinical detail a disastrous federal response to a preventable crisis 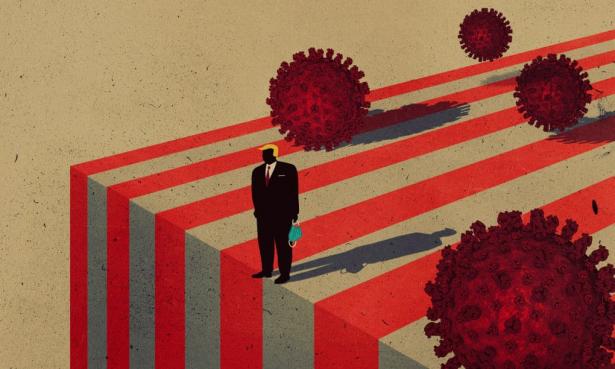 In May, as their city began to emerge from the paralyzing grip of coronavirus that killed over 33,000 residents, New York City-based film-makers Alex Gibney, Ophelia Harutyunyan and Suzanne Hillinger started retracing still-raw recent history on film. They tracked whistleblowers, and noted comparisons between the disastrous sprawl of coronavirus in the US and South Korea, which received their first positive coronavirus diagnoses on the same day: 20 January. Meetings were held by Zoom, interviews by remote camera draped by a shower curtain — a large, amorphous ghost, compliant with quickly adopted social distancing guidelines.

The resulting film, Totally Under Control, is a clinical, point-by-point recounting of America’s preventable slide into the coronavirus pandemic. It’s a damning list of mistakes, foreseeable crises, and political squabbling splayed across a coherent timeline intended to be released just ahead of the election, “so that people could render a judgment about how the federal response had been”, Gibney told the Guardian.

The two-hour film focuses primarily on the early days of the pandemic: the missed opportunities from January through April which led to America’s spiraling coronavirus present, an unending “first wave”. Though there’s plenty of sense still to be made from the pandemic summer – the surge of cases in the US Sunbelt and, more recently, an outbreak within the White House (a title card reveals the film wrapped just one day before Trump announced his positive diagnosis via 1am tweet) – the film-makers generally stuck to their mandate of early-stage diagnostics: forensic re-evaluation of January, February, and March, “because that’s when all the death, all the economic destruction could’ve been prevented”, said Gibney.

“As human beings, we forget things really quickly,” Harutyunyan said. “Especially when you’re living through it, you might forget what happened three months ago.” The film offers a chance to be “reminded about the decisions and actions made by this administration”.

Through first-person interviews, news footage and, yes, a literal timeline, Totally Under Control visualizes the US government response to Covid-19: a foreseeable mess of overlapping issues – some systemic, some deriving straight from a White House more concerned with political optics and petty rivalries than accuracy. The film includes numerous public health experts who raised the alarm in January, when CDC director Robert Redfield privately warned Trump about the risk of the virus as the president insisted, in a now infamous claim the film takes as its title, that everything was “totally under control”.

Dr Rick Bright, the former director of the Biomedical Advanced Research and Development Authority turned government whistleblower, recalls asking Health and Human Services director Alex Azar, a Trump appointee known for doubling the price of insulin as a pharmaceutical executive, for $10bn to launch pandemic preparedness plans in January, only to be denied and publicly undermined.

Lab executives and physicians recount the frustration of flying blind without testing for a month, as bureaucratic red tape slowed approval of testing to a halt. Former Obama-era officials such as Beth Cameron, who helped develop a “pandemic playbook” on how to handle an infectious crisis, and former HHS director Kathleen Sebelius, explain how lessons from the swine flu of 2009 and 2014 ebola crisis went unheeded by the Trump administration. And Max Kennedy, another whistleblower from within the Trump-appointed task force led by his son-in-law, Jared Kushner, to handle the shortage the medical supplies and ventilators, reveals the White House response to be a farcical circus of inexperience.

Not represented, however, is the perspective of those from within the CDC or HHS, despite several outreach attempts, according to the film-makers. After months of unreturned calls, it became clear that for those inside the government response and the CDC in particular, “their messaging was being controlled”, said Hillinger. “What we were experiencing was being mirrored by what the rest of the country was experiencing, of not being able to get a straight answer from the CDC, of not being able to understand how decisions were being made, when people knew things.”

In the final month of editing, Hillinger heard from sources that contacts in the CDC were wary about phone and email surveillance; shortly after, Politico revealed emails demonstrating how the Health and Human Services spokesman Michael Caputo, a Republican consultant who worked on the Trump campaign in 2016, attempted to undermine or contradict CDC reports on the coronavirus to align with the president’s rosy view. “That was really scary to see,” said Hillinger of the rank politicization of an institution long held in international esteem. “We’re still able to tell the story without these interviews, but I think it’s deeply concerning to not be able to hear the truth from the folks on the inside.”

Totally Under Control identifies numerous errors and Trump-sown chaos, but focuses in particular on arguably America’s most pivotal mistake: the failure to introduce widespread testing in February and March, resulting in a “missing six weeks” of fumbling toward crisis without the ability to map its spread. The numerous failures – a botched CDC test, unwillingness to quickly scrap the compromised test part and proceed anyway, FDA red tape which required labs to send applications by mail, among many other roadblocks – squandered the critical window for containing the virus. 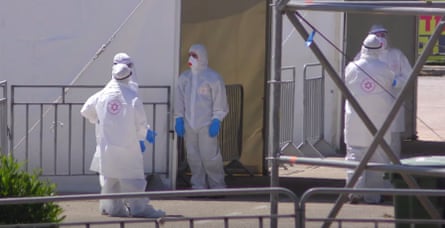 What makes the lost month “even more galling and infuriating”, said Gibney is the existence of a pandemic simulation, code-named Crimson Contagion, run by the department of Health and Human Services in 2019 which stressed the importance of rapid, widespread testing. Yet the warnings went unheeded as the virus seeped through the US. “They knew all this,” Gibney said of the administration, “and yet they refused to act.”

Where to assign the blame? In part, an American culture of scientific hubris, both within and outside of the CDC. In part, bureaucratic agencies gutted of expertise and experience by the administration, with heads appointed for political considerations rather than qualifications. But the buck ultimately stops with the president, said Gibney, one who has repeatedly demanded a slow-down in testing to lower America’s official case numbers. “Trump had the obligation to speak honestly to the American people and also to marshal the forces of the federal government to mount a response,” he said. Instead, America experienced a “sclerotic government response that is amplified by leadership which doesn’t seem to care”.

Gibney said he recognized a parallel “prison of belief” between Trump cronies and the subjects of his prior films, such as Theranos’ Elizabeth Holmes (The Inventor) and the Church of Scientology (Going Clear). “He runs his administration in a way which prizes loyalty above all else, as if he’s kind of a mafia don,” he said. “But then what’s demanded of people is that they begin to adopt and absorb his own magical thinking.”

Retracing the events also demonstrates the influence of non-elected officials who can mold long-standing federal institutions in their image – Azar and Caputo’s steering of information favorable to the president’s view, for example, or Kushner’s feckless task force. “If anything, the pandemic has really exposed exactly those kinds of high-level decisions can effect us in a very intimate way,” said Hillinger. “When you vote for somebody, you’re not just voting for them; you’re voting for all of the other political appointees that they may put in power. And those people, and the decisions that they make and the way that they communicate, have a direct effect on your life.”

Given America’s polarized information landscape, it seems unlikely the film will play to people not already familiar with or amenable to the truth of a mishandled federal response. Still, the film-makers maintain that visualizing as many factual reports as possible into a coherent timeline for the record is justification enough. By presenting a narrative sequence of events, “people will see very clearly that the problem here was not a virus that overwhelmed us,” Gibney said. “The problem here was an inept, bungled federal response. If it changes some minds, great. And if it reinforces the opinions of others, great.

“We went after a fact pattern. And we’re going to present that in a narrative form to people, hopefully seen as widely as possible.”

Get a Guardian digital subscription