In Toledo, Joe Biden lashed President Trump as an out-of-touch plutocrat who has repeatedly betrayed union workers, while playing up his own Irish Catholic, middle-class background. 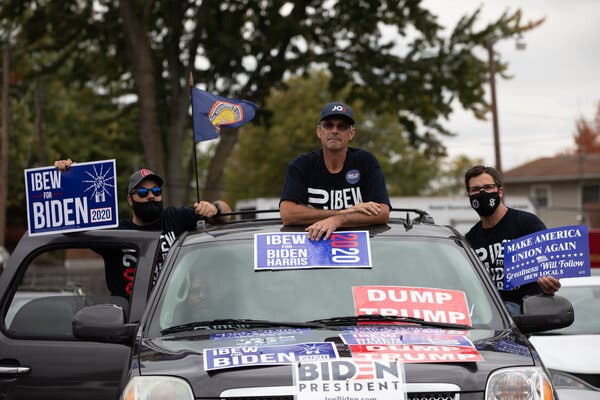 Almost four years after President Trump cemented his strength among white working-class voters by winning Ohio, Joseph R. Biden Jr. pushed on Monday to put the state back in play for Democrats in November, as he sought to energize the party’s base and court some of those same Americans who powered Mr. Trump’s victories across the industrial Midwest.

Campaigning in Toledo, Mr. Biden lashed his opponent as an out-of-touch plutocrat who has repeatedly betrayed union workers, while playing up his own Irish Catholic, middle-class background and stressing the Obama administration’s efforts on behalf of the auto industry. Lucas County, which includes Toledo, is a traditionally Democratic stronghold, but Mr. Trump performed better there in 2016 than the previous two Republican nominees.

“He turned his back on you,” Mr. Biden said of his opponent. “I promise you, I will never do that.”

Mr. Biden delivered his populist pitch at what the campaign called a “drive-in rally” outside the United Auto Workers’ Local 14 union hall, where attendees periodically honked in approval. He focused heavily on economic matters, detailing the challenges facing manufacturing workers in the state on Mr. Trump’s watch, but also laced his speech with criticisms of Mr. Trump’s handling of the coronavirus, which has been Mr. Biden’s central message throughout the pandemic.

He accused Mr. Trump of “reckless personal conduct,” and said that the president’s behavior since testing positive for the virus had been “unconscionable.” Mr. Trump held a campaign event later Monday in Sanford, Fla.

“The longer Donald Trump is president, the more reckless he seems to get,” Mr. Biden said. According to the Biden campaign, the Democratic nominee tested negative for the coronavirus on Monday.

And he jabbed at the Trump campaign’s decision to use Dr. Anthony S. Fauci, the U.S. government’s top infectious disease expert, in an ad without Dr. Fauci’s consent.

“Trump and his campaign deliberately lied,” Mr. Biden said. “It was a knowing lie, like we’re being told about everything about this Covid consequences.” 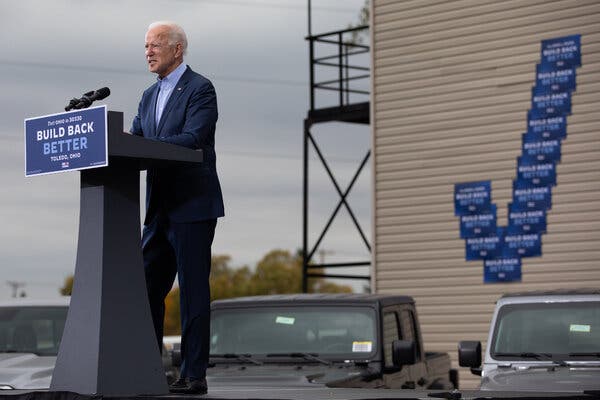 Mr. Biden focused heavily on economic matters but also laced his speech with criticisms of President Trump’s stewardship of the coronavirus.Credit...Emily Elconin for The New York Times

A poll from The New York Times and Siena College found last week that Mr. Biden and Mr. Trump were effectively tied in Ohio among likely voters, with Mr. Biden leading, 45 to 44 percent. Seven percent of Ohioans said they were undecided.

Mr. Biden’s trip Monday was his latest effort to cut into the margins of Mr. Trump’s base, especially in states that are critical to the president’s path to victory. After the first presidential debate, in Cleveland, Mr. Biden embarked on a train tour that took him through eastern Ohio and western Pennsylvania, regions that swung heavily in Mr. Trump’s direction in 2016. And later on Monday, Mr. Biden reminded voters that they had twice supported him and President Barack Obama.

But after a sound defeat four years ago and several other disappointments since, many Democrats still view flipping Ohio as a stretch compared with other places. The state has not been a central focus of Mr. Biden’s team throughout the race, though officials emphasize that they want to create as many pathways to electoral victory as possible.

In recent weeks, Mr. Biden has pitched the election as a choice between Scranton versus Park Avenue, a reference that contrasts his hometown in Pennsylvania with Mr. Trump’s privileged background. He tailored the phrase to match the locale on Monday as he spoke of Toledo and Park Avenue, trying to emphasize shared cultural connections between himself and many Ohioans.

“All Trump can see from Park Avenue is Wall Street,” Mr. Biden said. “That’s why his only metric for American prosperity that he values is the Dow Jones, or the index. Like a lot of you, I spent a lot of my time with guys like Trump looking down on me, the Irish Catholic kid in the neighborhood. Guys who thought they were better than me because they had a lot of money.”

“I still have a little bit of chip on my shoulder about guys like him,” he added, stressing his University of Delaware credentials — drawing an implicit contrast with Mr. Trump’s Ivy League background, as the two candidates compete for the support of white voters without college degrees.

In his remarks, Mr. Biden cast Republicans as indifferent to the economic and health care needs of working Americans. And he described an economic vision that creates more jobs in the United States and discourages outsourcing overseas. He promised to “stand up to China’s trade abuses” and said no one making less than $400,000 a year would see a tax hike. He also swiped at Mr. Trump’s very limited tax payments. 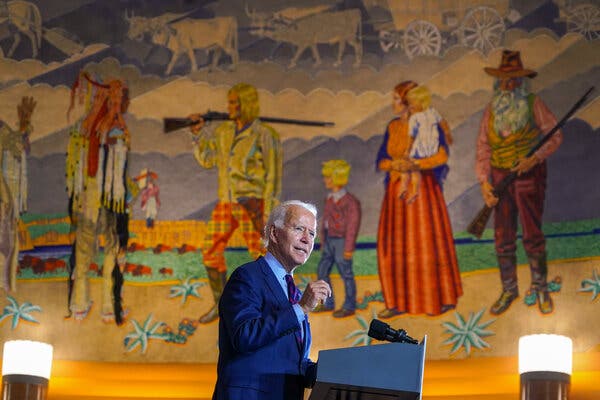 Mr. Biden spoke of unity in a speech at the Cincinnati Museum Center, voicing his continued belief in the possibility of bipartisanship. Credit...Chang W. Lee/The New York Times

Mr. Biden later spoke at a voter mobilization event in Cincinnati. The suburbs around Cincinnati have historically favoredRepublicans, but this year those areas, as well as suburban Cleveland and Columbus, are seen as especially in play as Mr. Trump struggles with white college-educated voters. If Democrats are to win back Ohio, the path will run through those places.

Reprising many of the themes he hit in a speech in Gettysburg, Pa., last week, Mr. Biden urged national unity, denounced racial injustice and voiced his continued belief in the possibility of bipartisanship even in a polarized environment.

“Those Republicans who are willing to cooperate get punished by this president,” he said. “I refuse to let that happen. We need to revive the spirit of bipartisanship in this country. I know that sounds bizarre in light of where we are.”

He also warned in stark terms about the possibility of voter intimidation.

“Don’t be intimidated by talk of having some of these Proud Boys stand there with their rifles in lines, where you can open carry, try to intimidate people without saying anything,” he said, referring to concerns that far-right supporters of Mr. Trump could be organizing for Election Day. “You, the American people, decide our future.”