Most Democrats, now looking forward to a Biden presidency and a narrow majority in the next Senate, realize that Republicans can block virtually all Democratic legislation by using the filibuster, and they therefore favor its abolition. 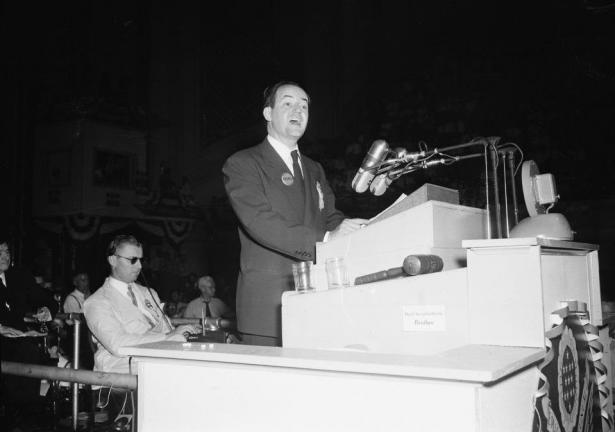 At the 1948 Democratic National Convention, the young mayor of Minneapolis, Hubert Humphrey, strode to the podium to make the case for a minority plank to the party’s platform, committing the Democrats to civil rights legislation. “The time has arrived in America,” Humphrey said, “for the Democratic Party to get out of the shadow of states’ rights and to walk forthrightly into the bright sunshine of human rights. People—human beings—this is the issue of the 20th century.” To the surprise of many, the Democrats then passed Humphrey’s plank.

Even more surprisingly, there are still Democrats more committed to states’ rights than to the human right of equal representation and majority rule that Earl Warren’s Supreme Court affirmed in its landmark “one person, one vote” decision. If you doubt that, you should read Washington Post columnist Chuck Lane’s argument for preserving the filibuster in today’s Post.

Most Democrats, now looking forward to a Biden presidency and a narrow majority in the next Senate, realize that Republicans can block virtually all Democratic legislation by using the filibuster’s 60-vote requirement for passage, and they therefore favor its abolition. Their argument isn’t merely political, it’s also rooted in small-d democratic values: Inherently, the filibuster is a tool to empower a minority to obstruct majority rule.

Lane, by contrast, seems content with the subordination of majority rule. “Until now,” he begins, “there was broad acceptance of the Senate’s countermajoritarian function,” to which the filibuster contributes. His words “until now” apparently exclude the pre–Civil War period when more and more Americans in Northern states fumed at the “slaveocracy” that Southern states wielded in the Senate, or the period of the 1940s through the early 1960s, when filibustering Southern senators blocked civil rights legislation (that was the target of Humphrey’s speech). Lane also fails to address that the population imbalance between the states has grown far in excess of what it was in 1787, when the Senate was created. California now has 70 times the population of Wyoming, but both are equally represented in the legislative house that once termed itself “the world’s foremost deliberative body.” Under the 60-vote stricture of the filibuster rule, the Senate is often blocked from any deliberations at all.

Lane points out that Democratic senators from small states—he cites West Virginia’s Joe Manchin and Maine’s Angus King (a nominal independent who caucuses with the Democrats)—still support the filibuster because it gives small states more bargaining power in the scramble for federal appropriations. Whether that power matters more to West Virginians and Mainers than, say, expanding their access to health care or enacting job-creating public works—Democratic priorities that filibuster-empowered Republicans will surely block—is, however, highly doubtful.

Lane also acknowledges that those Republicans, if the filibuster is preserved, will also surely block legislation conferring statehood on the District of Columbia. His filibuster defense is an interesting position to be held by a member of the Post’s editorial board.

Nonetheless, Lane affirms one service the filibuster performs is that “it helps level the legislative playing field among states of different sizes, amplifying the leverage of smaller ones.” He concludes with a caution: “The deeper the division” in making the Senate a more majoritarian body by axing the filibuster, “the more dangerous the conflict.”

Plainly, subordinating states’ rights to human rights, which radical leftist Humphrey termed the issue of the 20th century, doesn’t cut the mustard for Manchin, King, and Lane in the 21st. Shame on them.