The ultimate goal of many liberal movements is equity, which does not seem too much of a priority for Barrett. 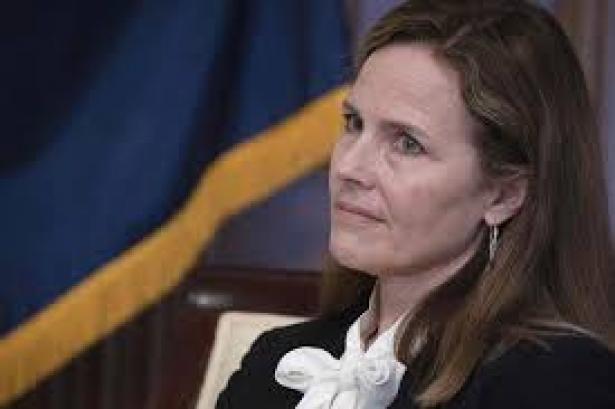 When it comes to Supreme Court rulings, constitutional law cases – like Roe v. Wade and Citizens United – tend to hog the limelight. But that’s not the only type of case that matters.

The Supreme Court issues a lot of important rulings that affect workers, like the Bostock case earlier this year declaring that LGBT workers are protected from discrimination under Title VII of the 1964 Civil Rights Act.

The Roberts court has been a mixed bag, however, when it comes to worker rights. It has also issued rulings that are unfavorable to unions and uphold forced arbitration of employment claims.

How might the addition of Judge Amy Coney Barrett to the high court alter its approach?

As a law professor specializing in employment law, I was curious about Barrett and decided to read the employment cases she decided while serving on the Seventh Circuit Court of Appeals. I found 15 such rulings written by Barrett on behalf of a three-judge panel and another 45 where she was part of the panel but did not write the opinion.

Although it is impossible to separate Barrett’s conclusions from those of the other panelists, her opinions provide a window into her approach.

Federal appellate courts favor the status quo. According to official statistics, federal courts will uphold the lower court ruling in 91% of appeals.

And in employment cases, most appeals involve workers whose cases were tossed out by a lower court. In other words, the deck is stacked against workers at the appellate courts, regardless of the judge assigned to a particular case.

Barrett’s three-judge panel on the Seventh Circuit was a little bit less likely than average to uphold the lower court ruling – they did so in 80% of the 45 cases. And Barrett did so in around 75% of the 15 opinions she wrote.

But did workers end up better or worse off as a result? Well, they didn’t do very well when one of Barrett’s co-panelists wrote the opinion – the panel ruled in the employee’s favor in only seven of those cases, or 16%.

Workers actually fared somewhat better in opinions written by Barrett. She issued a ruling favorable to the employee in one-third of her 15 cases. And there were two additional cases where she mostly upheld favorable jury verdicts for the worker but reduced some of the damages. That suggests she may be more sympathetic toward workers than her colleagues.

But a closer read of Barrett’s opinions suggest that her stance toward employment cases depends on whether workers are suing on their own or as part of a class action. 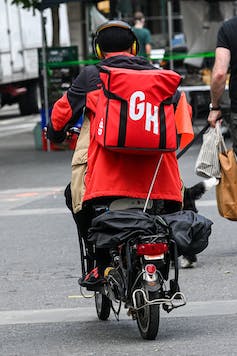 Class actions – where many workers bring a lawsuit together – tend to be important for enforcing minimum wage and overtime laws. They’re just not worth enough money for a lawyer to file one claim at a time.

But these sorts of class actions did not fare well before Judge Barrett. Of the five class action opinions she wrote, the workers lost in all but one.

Barrett’s skepticism is revealed in two class actions involving very similar fact patterns. In the first, which involved Grubhub delivery drivers, she sent the drivers to arbitration because they were not engaged in interstate commerce due to the local nature of their deliveries. This effectively ended their lawsuit, because the arbitration agreement prohibited class actions.

By contrast, in a remarkably similar case involving drivers for a cardboard box company, she ruled that the drivers were engaged in interstate commerce, even though they were mostly just driving to and from a loading dock or across the street. This ruling meant they couldn’t sue for overtime under an exemption meant for long-haul truckers.

Very similar facts, very similar legal rule, opposite rulings – both of which ended the case for the workers at issue. That’s not promising for workers.

It’s unclear whether Barrett’s adverse rulings simply reflect current law, which is quite unfriendly to class actions, or signal her underlying views.

However, a jaundiced approach toward class actions may be one respect in which Barrett mirrors the judicial philosophy of her mentor, the late Justice Antonin Scalia. In 2011, Scalia penned two landmark Supreme Court rulings – Dukes v. Walmart and AT&T v. Conception – which proved incredibly damaging to workers’ ability to use class actions to protect their rights.

With Barrett added to the bench, I would therefore expect the Supreme Court to continue to take a pro-business stance when it comes to class actions. 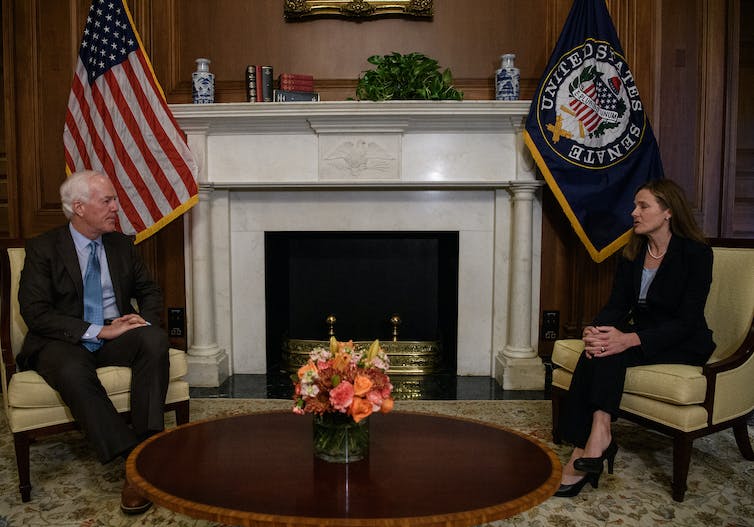 Barrett has been busy meeting with senators, such as John Cornyn, as she prepares for her confirmation hearings, scheduled to begin on Oct. 12. Nicholas Kamm-Pool/Getty Images

A premium on personal responsibility

Barrett’s approach to claims brought by individual workers was different and somewhat hard to pin down.

As best I could tell, she seemed to approach these lawsuits from a framework of personal responsibility. In general, she seemed to rule against whichever party made bad or irresponsible choices – whether that was the worker or the company.

When a prison guard was fired for falsely claiming that a prisoner hit her with a snack cake box, Barrett had no patience for her gender discrimination claim against the prison. The surveillance footage showed that the prisoner threw the box but it did not hit her. Barrett seemed especially concerned that the prisoner could have been sentenced to extra prison time if there hadn’t been surveillance footage to back up his account.

Likewise, Barrett proved unsympathetic toward an ice rink worker who brought a disability discrimination claim after causing a Zamboni accident. Barrett was also nonplussed by a race harassment claim brought by a traffic patrolman with a bad driving record that included driving away from a gas pump with the nozzle attached and almost crashing into a police car.

Barrett seemed so appalled by the bad driving, the merits of the harassment claim fell by the wayside.

But Barrett’s philosophy also favored workers when the employer dropped the ball or behaved badly. She upheld a jury verdict against Costco for failing to protect a worker who was being harassed by a customer. She upheld another involving a Latina park supervisor who brought a race discrimination case after her employer subjected her to surveillance and falsely accused her of altering her timecard. Barrett likewise sided with a butcher who was repeatedly sexually and racially harassed by his male co-workers and his supervisor.

In perhaps the best illustration of her philosophy, she reversed a lower court ruling against a worker who had been bilked out of his long-term disability benefits. The insurance company lost, Barrett ruled, because it had “blown” the regulatory deadline for responding to the worker’s claim. “A deadline is a bright line rule,” she wrote. “What’s good for the goose is good for the gander.”

Barrett’s approach to individual claims is consistent with certain conservative values, but it’s also distinct from a pro-business model of conservatism that seeks to expand employer power and discretion for the sake of efficiency and cost savings.

It’s also somewhat different from the Supreme Court’s approach to discrimination cases in recent years, which have been cloaked in technical language, with unpredictable results.

The closest analog to Barrett’s stance may actually be recent liberal social movements such as the #MeToo movement, which was morally centered on accountability and redress. On the other hand, the ultimate goal of many liberal movements is equity, which does not seem to much of a priority for Barrett.

Still, I would expect Barrett to be somewhat of a wild card when it comes to the rights of individual workers. Just like the rest of 2020, Barrett could prove to be more unpredictable than we assume.

Elizabeth C. Tippett is an Associate Professor, School of Law, University of Oregon