This week US Senator Sheldon Whitehouse (D-RI) charged corporate dark money is behind a plot, bearing all the marks of a covert operation, to control the Supreme Court and undermine the independence of the judicial branch of the federal government. 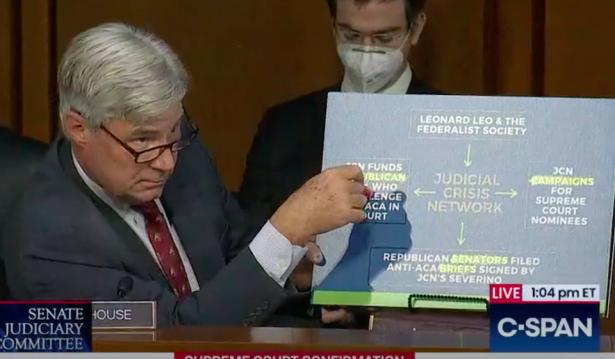 There’s a scheme being run on the American people, and, as we embark on this rushed and bitter fight over whether to confirm Judge Amy Coney Barrett to the Supreme Court, the American people ought to understand what’s really going on.

It almost doesn’t matter who President Donald Trump picked to replace Justice Ruth Bader Ginsburg; it never really did. What really matters is who — and whose money — lurks behind the process of shaping the Supreme Court, and what’s at stake for all of us, from the voting public to the Republican senators rubber-stamping it.

First, it's easy for even Washington insiders to forget how we actually got here. Back in the 1970s, corporate interests had grown uneasy with what they saw as attacks on their financial interests by the anti-war, environmental, civil rights and women’s rights movements. Napalm manufacturers were being protested; big companies faced workers organizing for fairer wages and working conditions, and a more just society. Polluters — like the chemical and fuel extraction businesses of the Koch family — faced accountability for damage they were doing to our air and water. Big Tobacco was rightly convinced it would be facing liability from the steadily mounting (and increasingly public) evidence that their product kills people and that they knew it.

A corporate lawyer for Big Tobacco — Lewis Powell — had an answer. In a memo, he implored the U.S. Chamber of Commerce and the corporations and ideologues in its ranks to organize a new campaign to influence government in corporations’ favor. In particular, Powell wanted corporate interests to focus on the judiciary.

The courts, he said, are possibly “the most important instrument for social, economic, and political change” in American government. Weeks after Powell wrote that memo, President Richard Nixon appointed him to the Supreme Court as Justice Powell.

Powell’s wish has come true. The corporate-funded Federalist Society now not only signs off on Republican judicial nominees, but the organization is “in-sourced” to the Trump White House, and Trump admitted it picks his nominees. And a dark-money-funded private organization, the Judicial Crisis Network, takes anonymous donations — some as much as $17 million — to fund political ad campaigns for those nominees’ confirmations.

Meanwhile, dark-money-funded private organizations hunt for plaintiffs of convenience to bring cases before the Supreme Court that advance the big donors’ agenda, while other dark money-funded organizations appear at the court by the orchestrated dozen as “friends of the Court” to instruct the corporate-selected judges how to rule.

There is every reason to believe the anonymous funders behind all of these groups are the same big interests.

The scheme bears all the marks of a covert operation — one being run against our own citizens, to undermine the independence of a branch of government that had been previously beyond the reach of lobbyists and special interests. It happens behind the scenes, through front groups and hidden money; the sources of the funds and the interests of the donors behind it are masked. But the goal is clear: to cement pro-corporate and partisan donors' interests in law by controlling our courts.

With a 5-4 court, those interests have already run up 80 partisan victories (the 73 counted here, plus seven more since). Now, they’re on the cusp of the prize they’ve coveted for generations: a 6-3 majority on the Supreme Court to rule in their favor every time.

What might a 6-3 court promise? Rulings that boost corporate and special interest power: limits on worker protection and the right to organize for fairer pay and wages; limits on Americans’ ability to sue companies when they’ve been harmed; limits on effective environmental and health protections; and new restrictions on minority voting — all while protecting unlimited corporate dark money in politics.

Job number one will probably be tearing down the Affordable Care Act: The moment the ink was dry on the health care law in 2010, the dark money-funded National Federation of Independent Business Legal Foundation and 26 Republican attorneys general sued to strike it down. The Heritage Foundation and other dark money-funded groups activated to support the litigation and undermine the law in the eyes of the public. Koch-backed groups like Americans for Prosperity spent enormous amounts on astroturfing and political attack ads to secure the Senate majority that Mitch McConnell — and eventually Donald Trump — needed to pack the courts.

The big ideological donors’ obsession with striking down the ACA likely explains the mad rush we are seeing from Republicans now. The deadline rush to jam Trump’s pick through may not be based on the election at all, but the argument date for the ACA case in the Supreme Court on Nov. 10. They failed to strike it down when Republicans controlled both houses of Congress; they failed even with a 5-4 majority on the Supreme Court.

In the midst of a pandemic that has already claimed 200,000 American lives, Republicans and the powerful interests who back them are fixated on undoing the health care protections regular Americans gained with the Affordable Care Act. Replacing Ginsburg’s vote to protect the law with the vote of a publicly anti-ACA Trump nominee gives them that chance.

The Trump administration is urging the court to overturn the ACA and thus undo protections for patients with pre-existing conditions, and Trump himself promised that his “judicial appointments will do the right thing, unlike Bush’s appointment John Roberts, on Obamacare.”

So on Nov. 10, the ACA’s Medicaid expansion — covering 17 million Americans — is on the chopping block, along with coverage for basic services like maternity care, cancer screenings and contraception. Nearly 135 million Americans with pre-existing conditions stand to lose insurance protections. Millions of seniors stand to pay billions more for prescriptions.

Republicans in the Senate still have a choice. They can still provide a legitimate Senate process and defend the integrity of our judiciary. But if you look at where else the power of this dark money covert operation has been deployed, you can understand why they likely won’t.

[Sen. Sheldon Whitehouse, a former U.S. Attorney and Attorney General of Rhode Island, is a member of the Senate Judiciary Committee.]