The fast-fashion industry has long been known for exploitative practices, which have continued during the pandemic, despite the health risk to garment workers. “Fashion masks,” substitute actual protection for mere simulation. 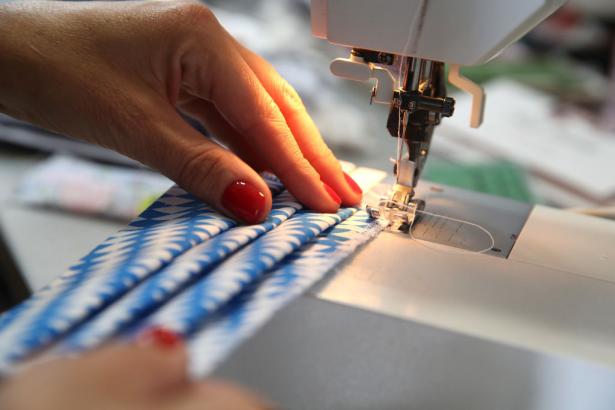 Because the wearing of face masks is necessary for virus suppression, brands have taken an opportunity to commodify essential life-protecting equipment, and have used it to further endanger and exploit marginalized people to produce their goods. , Alexander Hassenstein/Getty Images

Amid the pandemic, a new market for fashion-forward personal protective equipment (PPE) has arisen. Online retail giant Boohoo, already known for the maltreatment of workers that is endemic throughout the fashion industry, has now branched into so-called PPE production. At the beginning of the UK lockdown, Boohoo released a range of “fashion masks” that were a mere simulation of the look and feel of PPE. “Shop the style” went the motto, but the masks made no attempt to adhere to any of the necessary protective requirements.

In case we needed another reminder, this latest scandal is an exemplary reminder of the corporate fashion industry’s exploitative agenda, where fake masks are produced by appallingly underpaid workers who are themselves not granted adequate protective gear while the Leicester factory continues production amid the pandemic.

Coming under swift and deserved criticism, Boohoo has since corrected various design flaws in the masks. Yet the improvements are only piecemeal. In July, PrettyLittleThing, a subsidiary of Boohoo, released a black diamante fishnet fashion face mask. Providing zero aerosol coverage, the dictum of form following function was clearly not a consideration in the design of this mask. As many noted, these masks miss the point of PPE entirely.

The Tendency Toward Imitation

An intrinsic quality of capitalism is the delusion of freedom of choice. This tenet finds an illustrative example in fast fashion. Spoiled for (homogenous) choice, Boohoo’s masks come in saccharine shades of pink and amalgamations of patterns, colors, and typefaces. If indeed we are all free to choose, then why are the choices so unsettlingly uniform?

The production of these goods is so quick that they barely have time to name the items. “Woman Script Fashion Face Mask”’ reads one didactic description on Boohoo’s online store. The word “Woman” is scrawled in a diminutive hand, a script, in a repeat pattern across the textile. The exaggerated cursive ascenders loop up and down, left to right, the eye following the smooth curves of the letter, each hook, bowl, and crossbar contributing, stroke by stroke, to the formation of a word: “Woman.” At some point in commercial history, this elaborative cursive script became stereotypical of feminine graphic expression. The caress of the consumer’s eye over the pronounced curve of the letters was undoubtedly likened to the caress of the male gaze.

Of course, the connection between this cursive type and feminine expression is a fallacy — a history of the letterform proves that the lineage of an oblique hand rests somewhere between an economy of space and time, not relating to gender or constructed expressions of femininity. This is an example of how typography, as visible language, exceeds its function as merely a communication device, and instead is used to reinforce constructed stereotypes of gender within society. This form of commodity feminism is thriving in the new market for PPE.

German sociologist and philosopher Georg Simmel spoke of fashion as an example of the “psychological tendency towards imitation,” explaining that “whenever we imitate, we transfer not only the demand for creative activity, but also the responsibility for the action from ourselves to another. Thus the individual is freed from the worry of choosing and appears simply as a creature of the group, as a vessel of the social contents.” It is easy to view modern fashion production through this lens. From the psychological “tendency towards imitation,” we can extrapolate the justification of the wasteful, exploitative, and abusive practices perpetuated by the fashion industry. It becomes much easier to wear the burden of sustained human rights abuses when the cuts are on trend, in season, and all around us. Common misconceptions of these exploitative practices being limited to fast-fashion are incorrect — there are examples of the very same mistreatment of workers in factories (sub)contracted by luxury fashion houses.

The fashion industry has long mined subcultures for inspiration, profiting from cultural micro-resistance while cynically extracting styles without the criticality that helped produce them. This harvesting happens at every level, from lauded European luxury fashion houses to fast-fashion online retail giants and everything in between. Boohoo designers have been harvesting Tumblr aesthetics for years. You can still see remnants of vaporwave reverberating below the surface of their designs, featuring renders of what has been described as the “detritus of techno-capitalism”— a mash-up of soft-hued shades, the synthesizing of patterns, of typefaces, of materials, and of objects. Add to the mix a slogan of unity, and we have the corona couture of 2020.

Typography also plays a supportive role in garnering cultural capital and acceptance in the eyes of the public. The fashion industry’s slick exterior, built up through the use of visual communication, succeeds in veiling mass exploitation and the abhorrent treatment of humans⁠, nonhuman animals, and the environment. We frequently see fashion items, for example, Boohoo’s “Together” mask, showing outward statements that are in direct opposition to the retailers’ malpractice around labor standards, irresponsible disposal of waste, and unsustainable farming of raw materials for production.

The Damage of Pandemic Fashion

A report written by Labour Behind the Label in June 2020 highlighted that a number of Boohoo’s Leicester factories remained open during the UK lockdown, many functioning at unrestricted capacity even before the countrywide lockdown on businesses was eased. The report notes that Boohoo Group Ltd accounts for between 75 and 80 percent of garment production in Leicester. Prior to the COVID-19 crisis, there had been reports on factories in Leicester outlining wage theft, underpayment, and alleged withholding of entitlements, among various other illegal and exploitative practices. These allegations are rife throughout this region, and the pandemic has only increased the severity of human rights abuses that are synonymous with modern slavery.

In March, Boohoo ran a social media campaign titled the “Daily Act of Kindness” giveaway. They asked you to tag someone who “deserves a treat.” It’s one thing to publicly perform “acts of kindness” when the loss of your profits on these promotions is offset by the exploitation of marginal factory workers in their production chains in Leicester, and apparently another thing entirely to investigate your own supply chains. These empty gestures must be read for what they are, publicity stunts devised to increase Boohoo’s social capital and cultivate an image of social responsibility.

Boohoo reported 44 percent growth in the first quarter of this year and, due to the increase in online shopping, their share price has increased by 22 percent. It’s hard to imagine they are financially unable to safeguard their workers’ rights, or to ensure they are meeting the bare minimum of their legal responsibilities during a pandemic. In consideration of the UK’s laws concerning modern slavery, these concerns are apposite for questionable procurement practices, especially regarding the retention of suppliers who disregard the safety of workers. Investigations in the region have shown that many workers who do not have “documented resident status or entitlement to work” are reluctant to come forward to report labor rights abuses.

Boohoo’s maltreatment of workers is not limited to its suppliers. In March, Boohoo staff spoke out about their inability to socially distance safely while working on photoshoot sets. In its most basic expression, a fashion photo shoot with a model requires hair, makeup, styling, lighting, a photographer, assistants, and a producer. Staff present on these shoots reported that little more was done by Boohoo to ensure their safety than to provide gloves, masks, and hand sanitizer. Many people involved in these shoots are likely to be freelancers, so perhaps Boohoo’s negligence does not come as a surprise. With unorganized, precarious workers already fighting over the scraps, what protections are in place if they speak out about concerns regarding workplace safety?

To make matters worse, Labour Behind the Label received reports that workers in Leicester’s garment factories have been instructed to come to work even if they were experiencing symptoms of COVID-19, or face the loss of their jobs and livelihoods. There have also been reports of workers who test positive being told to conceal their results from their colleagues. As in so many sectors, garment workers are being forced to choose between earning a living and prioritizing the health of themselves, their colleagues, and their families. Despite this, vacuous Instagram posts and inane statements about safety on garments continue to give lie to the reality of Boohoo’s exploitative model.

Because the wearing of face masks is necessary for virus suppression, brands have taken an opportunity to commodify essential life-protecting equipment, and have used it to further endanger and exploit marginalized people to produce their goods. Consumers are helped to feel as though their individual choice is making a difference, all the while contributing to a system of mistreatment in the factories. Boohoo is just one example of a company profiting from this crisis. Until we see big systemic change, we can continue to see more.

Ella Egidy is a typographer and designer based in Melbourne.