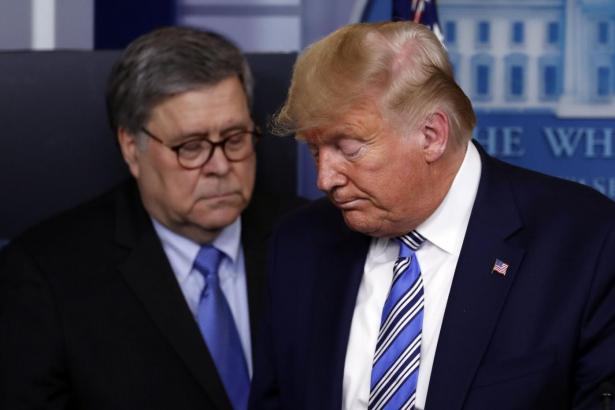 President Donald Trump moves from the podium to allow Attorney General William Barr to speak about the coronavirus on March 23 in the James Brady Briefing Room in Washington., associated press

PITTSFIELD, MA — A labor group with members in Berkshire County is pledging to take nonviolent action to defend the democratic process, “if Donald Trump and his GOP enablers attempt to obstruct, subvert, sabotage, overturn or reject a fair and complete count of presidential ballots.”

In a unanimous vote Monday, the Western Massachusetts Labor Federation approved a resolution calling for a general strike, should it be necessary.

Lydia Wood, a field organizer for the federation, said in an interview Tuesday that while details are being worked out, members of 30 unions are prepared to use a general strike to protest any effort by the current administration to hold on to power despite evidence that his rival, Joe Biden, has won the presidential election.

“We consider that the most powerful tool the movement has,” she told The Eagle. Wood said that the federation’s members will meet during the week of the Nov. 3 election to decide how to proceed.

Similar votes have been taken by groups associated with the AFL-CIO, the national labor group. The AFL-CIO president, Richard Trumka, has called for action in support of a peaceful transition of power, should Trump lose his bid for reelection. The AFL-CIO has endorsed Joe Biden.

“America’s workers will continue to be steadfast in defense of our democracy in the face of President Trump’s antics, and we stand ready to do our part to ensure his defeat in this election, followed by his removal from office,” he said in a statement provided by the local federation.

The group’s president, Jeff Jones, said the resolution serves to put members on notice that they might be called upon to defend democracy.

“This resolution aims to get us thinking about how we as a labor movement intend to respond in the case of an attempted coup,” he said in a statement.

Wood said that in the Berkshires and Western Massachusetts, the federation represents workers at Berkshire Community College and with the United Food and Commercial Workers International Union and with SEIU Local 509, among others.

The resolution notes that Trump and Vice President Mike Pence have declined to say publicly that they will respect the outcome of the election, whatever it is.