Warning of the 'Many Trumps... in Waiting,' Ocasio-Cortez Says Democrats 'Have to Be Better'

"We're not good enough right now," the New York Democrat says of her party, and unless the material lives of working-class people are improved the nation's dangerous slide to the right will continue. 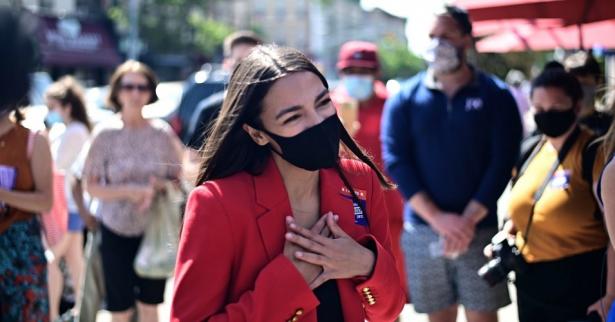 Rep. Alexandria Ocasio-Cortez (D-N.Y.), featured in a new Vanity Fair profile, says Democrats "have to be better" in order to win, remain in power, and successfully confront the challenges facing the nation today., (Photo: Johannes Eisele/AFP via Getty Images)

Democrats will have to do much more than just defeat President Donald Trump if they want to remain in power and make a real difference for the people who need it most, says Rep. Alexandria Ocasio-Cortez in a Vanity Fair cover article published Wednesday.

In order for Democrats to deliver the change so desperately needed by so many Americans, the party and its politicians must eschew the mediocrity of incrementalism and pursue more progressive policies and actions, the New York Democrat known colloquially as AOC told Michelle Ruiz, the article's author.

"It's not just that we can be better, it's that we have to be better," the first-term congresswoman insists. "We're not good enough right now."

Being careful not to presume victory by Democratic presidential nominee Joe Biden in next week's election, the 31-year-old Bronx native warns that the country is "still in a lot of trouble" even if Trump is sent packing in January.

If "people's lives don't actually feel different" under a Biden administration, then "we're done," she says before asking, "You know how many Trumps there are in waiting?"

Like Sen. Bernie Sanders (I-Vt.)—who she backed as both a volunteer in 2016 and as a key surrogate in this year's presidential contest—Ocasio-Cortez is a proud democratic socialist who believes, to quote musician and activist Nina Simone, that "to do things gradually brings more tragedy." Her working-class roots confer a certain credibility that permits honest assessment of Democratic policies rooted in lived experience.

Take the Affordable Care Act, for example. Ocasio-Cortez unabashedly advocates for Medicare for All because she has felt the ACA's painful shortcomings first-hand.

"The main reason why I feel comfortable saying that the ACA has failed is because it failed me and it failed everyone that I worked with in a restaurant," she says bluntly.

"You try buying insurance off Obamacare," challenges Ocasio-Cortez. Once a waitress and bartender, she did buy it, paying $200 a month for what she sardonically calls the "privilege" of an $8,000 deductible.

Or take immigration. "The Democratic party has been—and this dates back to the Obama administration—extremely weak on developing just immigration policy because we're scared of our own shadow," she says.

Ocasio-Cortez contemptuously blasts Republicans like Trump who claim "we can't have tuition-free public colleges because there's no money when these motherfuckers are only paying $750 a year in taxes." But she also admonishes Democrats to avoid the false safety of incrementalism, which won't satisfy progressives and will elicit howls of "communism" from reactionary right-wingers no matter how moderate the change.

The question many progressives have been asking throughout her first House term is: does Ocasio-Cortez plan on taking her quest for a more equitable, peaceful, and ecologically sound country to the next level?

"Is Congress not good enough?" she jokes.

Such decisions—and their potential consequences—are no laughing matter. Rep. Ted Yoho's (R-Fla.) misogynistic haranguing of Ocasio-Cortez on the U.S. Capitol steps earlier this year, which she deftly and permanently entered into the congressional record, was just a glimpse of the abuse she has endured.

Indeed, Ocasio-Cortez has been subjected to everything from attacks on her working-class roots and (rather formidable) intellect to incessant death threats to federal officers circulating a meme depicting her violent rape and even a white supremacist plot to assassinate her. Her family and associates have also been threatened.

Ocasio-Cortez admits in the interview she has had doubts—especially given the threats and vitriol—about her ability to do the job.

However, such threats are meant "to get you to destroy yourself so that they don't have to destroy you," says the congresswoman—who refuses to be destroyed either way.

"I truly make an assessment to see if I can be more effective," she adds. "And so, you know, I don't know if I could necessarily be more effective in an administration, but, for me that's always what the question comes down to."