January runoff races could flip the Senate and prevent the majority leader from obstructing another Democratic presidency. This is a richly deserved nightmare scenario for <itch McConnell who has given Americans so many nightmares for so many years. 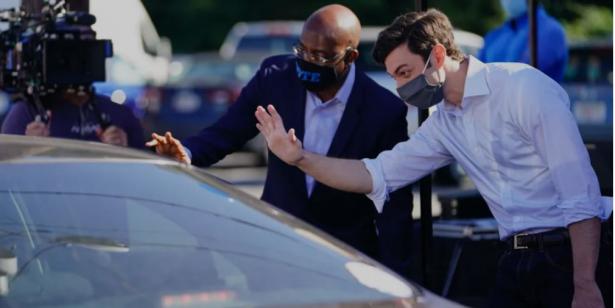 Not so fast, Mitch McConnell. The grim reaper from Kentucky can’t count his Senate majority just yet, thanks to a quirk of American democracy and a constitutional codicil that could see Georgia voters take his gavel away.

Unlike most states, Georgia allows for runoff elections when no candidate for the US Senate receives a majority of the votes in initial balloting. The state had two Senate elections on November 3—a regular contest for the seat held by Republican incumbent David Perdue and a special election for the seat held by appointed Republican incumbent Kelly Loeffler. The special election pitting Loeffler against the inspired candidacy of the Rev. Raphael Warnock is definitely headed to a runoff on January 5, and it now appears the regular election for the Perdue seat will go the same direction.

If both seats flip, as is a real possibility in the suddenly competitive state of Georgia, McConnell’s numbers no longer add up. At best, he’s got 50 of 100 seats—and this is where the Constitution comes in. If the Senate is tied 50-50, the vice president has the authority to tip the balance to one party or another. And it now looks like the new vice president will be Democrat Kamala Harris, the California senator who with running mate Joe Biden is poised to prevail over the Republican ticket of Mike Pence and Donald Trump.

This is a richly deserved nightmare scenario for McConnell, the cynical political careerist who has given Americans so many nightmares for so many years.

McConnell has been the definitional figure in the governing of the United States for the better part of a decade. As the conniving and calculating majority leader of the US Senate, he obstructed President Obama and empowered President Trump. McConnell has packed the Supreme Court with right-wing judicial activists and blocked life-and-death aid in the midst of a pandemic. He has stacked the deck in favor of his billionaire donors, Wall Street speculators, and the military-industrial complex. Yet, when the results of the 2020 election were initially being tabulated, he looked to be positioned to continue as the ghoul of American politics—sapping the life out of the anticipated presidency of Biden.

Despite their track record of thwarting economic, social, and racial justice, of denying climate change, and of squandering budgets on tax breaks for the rich and military adventurism, McConnell’s Republicans did well enough on Tuesday night. While Biden appears to have prevailed with a promise to be less obnoxious than Trump, his soft-focus campaign offered little in the way of coattails. Democrats gained seats only in Arizona and Colorado, while they lost a seat in Alabama. For the most part, vulnerable Republican incumbents survived. By Wednesday, even as Democrats held out slim hope for good results from unsettled contests in North Carolina and Alaska, it looked as if McConnell and the Republicans would at least hang on with a 51-49 majority, and perhaps enjoy a 52-48 advantage. That would have enabled the majority leader to dictate who a President Biden could appoint and what policies a new administration might advance. Instead of sweeping to power with a mandate for change, Biden would begin as a lame duck looking to achieve incremental progress with executive orders and and modest appointments.

Then the voters of Georgia weighed in. A historically conservative state that both parties had in recent decades written off—Republicans who were sure they would win it, Democrats who were sure they wouldn’t—saw a surge in voter turnout (Thank you, Stacey Abrams.) that required days of ballot counting. The tabulations eventually moved Biden into a narrow lead, positioning him where he might become the first Democratic presidential nominee to win the state in 28 years. They also resurrected the Senate candidacy of Jon Ossoff, who was thought to have fallen short on election night. In the early count, it looked as if Perdue was over the 50 percent mark and headed for a second term. But as Biden’s vote total ticked up, Perdue’s edge ticked away. By Friday morning, Perdue had dropped to 49.8 percent, The Atlanta Journal-Constitution headline announced “Ossoff, Perdue appear headed for runoff in Georgia,” and the Democrat’s campaign was declaring, “We have all the momentum, we have all the energy, we’re on the right side of history. Y’all ready to work? We’re just getting started.”

There are still hurdles for Ossoff. Perdue’s all but certain to demand a recount, in hopes of clawing his way over the 50 percent threshold.

Democrats should fight to make sure the recount goes their way. But they shouldn’t wait to start campaigning for Ossoff and Warnock. This is the time for Democrats who want to see a successful Biden presidency to go all in for a pair of Georgia candidates who can both win. While some hope is being held out for an upset in Alaska’s slow-counting Senate race, the best bet is Georgia, where the party’s  gaining the two Senate seats will give it control of the chamber. The stakes are as high as they possibly could be, because, as Syracuse University political science professor Steven White notes, “If Democrats win the two Senate races in Georgia, their odds of being able to pass the legislation in their platform [go] up dramatically.” And McConnell’s odds for obstructing another Democratic president decline just as dramatically.

Ossoff and Warnock are different candidates who have run distinct campaigns. But the likelihood is that they will rise or fall together in what could well be the most expensive Senate competition in American history. Loeffler is reputedly “the richest politician on Capitol Hill” and she’s already spent more than $20 million of her own money on an ugly campaign that has positioned her to the right of Trump. Perdue is also a multimillionaire, and McConnell will steer every special-interest dollar he can find into these two races. But Democrats have held their own in fundraising this year, and they have a powerful grassroots apparatus in place in Georgia. A Working Families Party assessment of the November 3 numbers is spot on when it argues, “The results we’re seeing across Georgia prove that there is a path for progressives in the South.”

Both Democratic candidates bring strengths to the competition. Ossoff, who built name recognition and fundraising prowess with a high-profile 2017 congressional bid in suburban Atlanta, shredded Perdue in a late-October debate. Warnock, the senior pastor of the Historic Ebenezer Baptist Church, the spiritual home of the Rev. Dr. Martin Luther King Jr., finished first in the initial vote thanks to an urban-rural coalition with a proven capacity to mobilize voters.

Former President Barack Obama has already been campaigning for these two Democrats—dismissing the scandal-plagued Republican incumbents as “Batman and Robin gone bad…the dynamic duo of doing wrong” and reminding Georgians in an Atlanta appearance just before the November 3 election, “You’ve got the chance to flip two Senate seats.” Now that the map is clearer, Obama, Biden, Harris, and the Democrats should reframe that message to this: You’ve got the chance to flip the Senate, and prevent McConnell from obstructing another Democratic presidency.

[John Nichols is a national affairs correspondent for The Nation and the author of the new book The Fight for the Soul of the Democratic Party: The Enduring Legacy of Henry Wallace's Anti-Fascist, Anti-Racist Politics (Verso). He’s also the author of Horsemen of the Trumpocalypse: A Field Guide to the Most Dangerous People in America, from Nation Books, and co-author, with Robert W. McChesney, of People Get Ready: The Fight Against a Jobless Economy and a Citizenless Democracy.]