Arizona and Wisconsin: How Indigenous Voters Helped Swing the 2020 Election

Despite voter suppression and a devastating pandemic, Native American voters made the difference in Biden’s winning margin in Arizona and Wisconsin. While Indigenous voters are not monolithic, clear voting patterns can be seen across Indian Country. 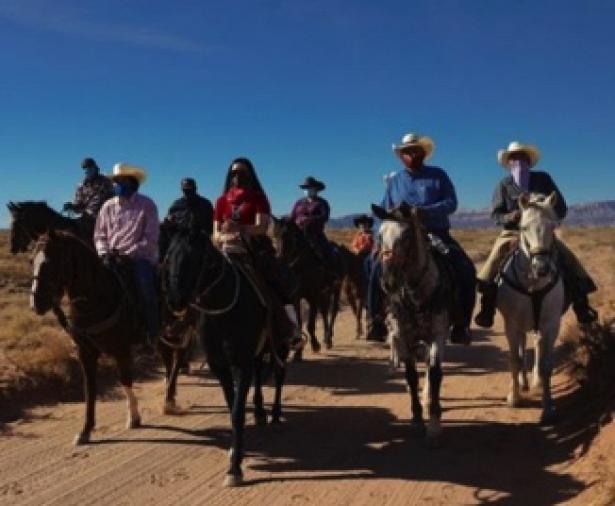 Navajo citizens ride to cast their votes in Arizona. “We rode to the polls to honor our ancestors who fought for the right to vote. We also rode to honor those who died from Covid-19,” Ride to the Polls organizer Allie Young.,Levi Rickert/Native News Online

This year’s presidential election has been a close race in a handful of states, including Arizona. On Wednesday, for just the second time in 70 years, the Associated Press called the race for a Democratic presidential candidate, in part due to the Native vote.

Indigenous people in Arizona comprise nearly 6% of the population — 424,955 people as of 2018 — and eligible voters on the Navajo Nation alone number around 67,000. Currently, the margin between Democratic candidate Joe Biden — who has released a robust policy plan for Indian Country — and incumbent President Donald Trump is 17,131 as of Monday. (Votes continue to be counted, so numbers may change)

Precinct-level data shows that outside of heavily blue metropolitan areas like Phoenix and Tucson, which also have high numbers of Indigenous voters, much of the rural blue islands that have voted for Biden and Mark Kelly, the Democratic candidate for U.S. Senate, are on tribal lands. On some Tohono O’odham Nation precincts, Biden and Democratic vice presidential candidate Kamala Harris won 98% of the vote. As of Nov. 9, the three counties that overlap with the Hopi Tribe and Navajo Nation went for Biden at a rate of 57%, as opposed to 51% statewide. Voter precincts on the Navajo Nation ranged from 60-90% for Biden.

That pattern is consistent with 2016, when the rest of the state went for Trump. “Partisan groups have long ignored Native voters, including in states such as Arizona, New Mexico, North Dakota, South Dakota and Montana,” says Jordan James Harvill (Cherokee), chief of staff of the nonpartisan group VoteAmerica, which worked directly with Navajo Nation and community partners to get out the vote. “We view these voters as some of the highest-potential voters in the electorate and we’ll continue to invest in voters in Indian Country for years to come.

”Indigenous people in Arizona were hit hard by the pandemic, which was exacerbated by Republican state officials who did little to limit the spread of COVID-19 through public safety measures like required mask wearing, business closures, or adequate translations for COVID-19 resources. All this was compounded by an inadequate federal response that delayed financial relief to tribal governments.

At one point in May, the Navajo Nation had the highest ratio of COVID-19 cases in the U.S., surpassing New York City. President Jonathan Nez has criticized the Trump administration for its botched response, and the Navajo Nation has joined other tribal nations in a lawsuit over the dispersal of the funds. Recent exit polls showing how Indigenous voters favored Biden overall in Arizona also showed the pandemic response to be the most important issue on their minds.

In the weeks before the election, several Navajo citizens filed suit against the state of Arizona over the deadline for mail-in ballots. Pointing to the myriad challenges Indigenous communities face with vote-by-mail, they asked the court to allow ballots to be postmarked — instead of received — by 7 p.m. on Election Day. They lost the case, but because of efforts by groups like VoteAmerica, Four Directions, Rural Utah Project and the Nez administration, counties like Apache County, which overlaps the Navajo Nation and Hopi Tribe, saw 116% voter turnout compared to the 2016 election. (Votes are still being counted, so total numbers and percentages are likely to change.)

On the Tohono O’odham Nation, which spans Pima, Maricopa and Pinal counties, most precincts were above 90% for Biden, according to a statewide map pulled together by ABC15 Arizona. Throughout the Trump administration, O’odham citizens and the tribal government have been vocal in their opposition to the border wall, which Trump has forced through without tribal consultation, even as it severs the landscape and destroys ancestral O’odham sites. Those high numbers were repeated throughout precincts covering the lands of the Hualapai, Havasupai, White Mountain Apache, Gila River, San Carlos Apache, Pascua Yaqui, Cocopah and Colorado River tribes, generally within the range of 70-90% for Biden.

Indigenous voters are by no means a monolith, and the majority of Indigenous people live in urban areas, which makes it likely that many more voted in metro areas and therefore don’t appear in voting data from tribal lands. (In fact, a survey done by a coalition of Indigenous organizations called Building Indigenous Power showed that Indigenous voters on reservations were less likely to vote compared to those in the city or small towns.) Still, clear voting patterns can be seen across Indian Country:

Additionally, Indigenous candidates did well: A historic six Native candidates will be heading to the U.S. Congress next term, New Mexico has made history by becoming the second state after Hawaii whose delegation to the U.S. House of Representatives will now be made up entirely of women of color, two of whom are Native. That’s in addition to dozens of Indigenous candidates elected to state and local offices, 11 of which were elected to state office in Arizona.

As the 2020 election comes to a close, James Harvill says this election illuminates the importance of the Native vote, which is likely to only grow because of an increasing young population aging into the electorate and a strong level of community support. “When we’re looking on to the next several years, we’re going to see that Native American voters become one of the defining members of the electorate, much like we’re seeing of Latinx and Black voters.”

[Anna V. Smith is an assistant editor for High Country News. Email us at editor@hcn.org or submit a letter to the editor. Follow Anna Smith on Twitter @annavitoriasmith.]