The United States Is Not a Democracy. Stop Telling Students That It Is

“Students are commanded to vote, but not to judge the fundamental questions of governance not on the ballot — like the legitimacy of the Electoral College”

November 18, 2020 Ursula Wolfe-Rocca Hechinger Report
Printer friendly
The United States Is Not a Democracy. Stop Telling Students That It Is Published November 18, 2020 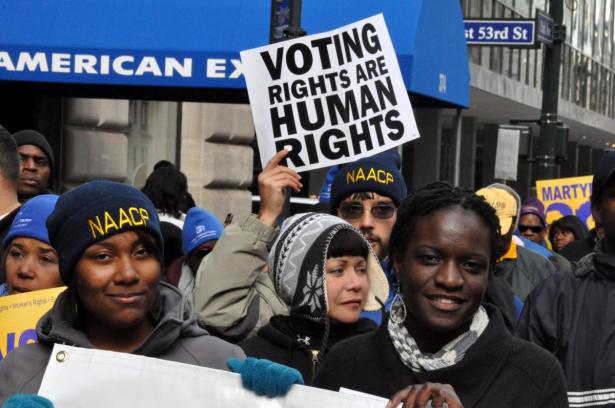 When U.S. voters recently cast their ballots, an unchecked pandemic raged through the nation, uprisings against racism and police violence stretched into their eighth month, and new climate change-intensified storms formed in the Atlantic.

The reactionary and undemocratic system by which we select our president was an insult to the urgency of the moment. Although millions more people voted for Joe Biden than for Donald Trump — the difference is now 5.4 million — it took several days to learn who won, thanks to the Electoral College. To the relief of many, it appears that this time — unlike in 2000 and 2016 — the candidate who got the most votes nationwide also won the presidential election.

If our students only learn about this exceptionally strange system from their corporate-produced history and government textbooks, they will have no clue why this is how we choose our president. More importantly, they will have a stunted sense of their own power — and little reason to believe they might have the potential to create something better.

To review: A voter in Montana gets 31 times the electoral bang for their presidential ballot than a voter in New York. A voter in Wyoming has 70 times the representation in the U.S. Senate as a voter in California, while citizens in Puerto Rico and Washington, D.C. have none. The Republican Senate majority that recently confirmed Amy Coney Barrett to the Supreme Court was elected by 14 million fewer votes than the 47 senators who voted against her confirmation.

Yet politicians and pundits regularly pronounce the United States a “democracy,” as if that designation is self-evident and incontrovertible. Textbooks and mainstream civics curricula make the same mistake, stipulating the brilliance of the framers, the democratic nature of our system and the infallibility of the U.S. Constitution, so that our institutions seem outside of history and beyond politics.

The district-adopted textbook I was assigned last year in my Portland, Oregon, suburb, “America Through the Lens” (National Geographic, 2019), says this about the 2016 U.S. presidential election: “…Trump won a narrow majority of voters in a number of swing states, or states where the election might go to either party. Even though almost 3 million more Americans cast their votes for Clinton, Trump won the electoral vote 306 to 232.” Since the United States’ status as a democracy is taken for granted, this textbook sees no need to offer any elaboration of a system in which “swing states” are decisive, and in which the person selected by the majority of voters does not win the presidency.

Perhaps the editors of “America Through the Lens” assume students have read a previous section of the text on the Electoral College? No. Paging back to the chapter on the U.S. Constitution, one finds only this anemic paragraph:

When my textbook matter-of-factly declares that the Electoral College was a “solution,” but makes no mention of the elite and white supremacist interests for whom that was true, nor the exploited and disenfranchised peoples for whom it was a disaster, it does not educate students. It lies to them.

The mock elections and legislative simulations common in U.S. civics classrooms too often encourage students to investigate the swirl of issues inside the container of U.S. “democracy,” but rarely the container itself. Students are commanded to vote, but not to judge the fundamental questions of governance not on the ballot — like the legitimacy of the Electoral College. What if our civics lessons invited students not just to become occupants of an already-built U.S. government, but engineers and architects able to redesign, reframe and rebuild the whole structure?

One way to cultivate this activist sensibility is to offer our students a curriculum rich with an alternative pantheon of “framers” and “founding parents” in the ongoing pursuit of justice. As Angela Davis writes, “freedom is a constant struggle.” When, for example, we teach students about the fight for the 15th Amendment, alongside the movement 100 years later for the Voting Rights Act, alongside current efforts to combat voter suppression, we not only provide evidence of Davis’s words but also invite students into that struggle. By rejecting the glorification of a U.S. founding that meant — and continues to mean — oppression for so many, we can affirm our students’ reality and provide models of activism through which they might reimagine and revise it.

On Nov. 2, 2020, one day before the general election that would deny him a second term, Trump issued an executive order establishing the 1776 Commission. The commission’s mandate? A “restoration of American education” to emphasize the “clear historical record of an exceptional Nation dedicated to the ideas and ideals of its founding.”

President Trump has been defeated, but this commitment to institutionalize the teaching of American exceptionalism has not been. We educators must fight for a curriculum that teaches our students facts, not fables. The United States has never been a democracy, defined by freedom and equality for all.

Nor has there ever been a time when people did not struggle toward a democratic future, dreaming of freedom, risking life and limb to make those dreams manifest, and creating a more just society along the way. Let’s teach civics and history in ways that affirm for our students that there’s nothing sacrosanct in the political and economic status quo, that freedom fighters, past and present, are founders too, and that we all have a right to be framers — to redesign this structurally unsound house to better shelter our lives, safety, comfort and full humanity.

Ursula Wolfe-Rocca is a high school social studies teacher in Portland, Oregon. She is a Rethinking Schools editor, and an organizer and curriculum writer for the Zinn Education Project. She can be reached at ursula@rethinkingschools.org or on Twitter @LadyOfSardines.

This story about the Electoral College was produced by The Hechinger Report, a nonprofit, independent news organization focused on inequality and innovation in education. Sign up for Hechinger’s newsletter.