Mangrove opens "Small Ave" on a rousing note, a portrait of an immigrant enclave and electrifying courtroom drama telling the true story of the Londoners known as the Mangrove Nine. 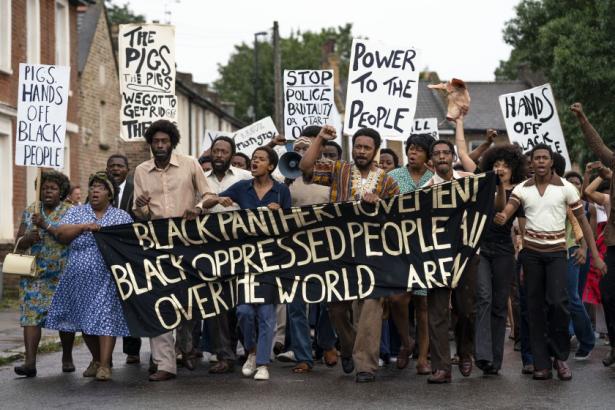 Steve McQueen, the first Black filmmaker to win the Oscar for best picture, has made films about the 1981 Irish hunger strike (“Hunger”), sex addiction (“Shame”), American slavery (“12 Years a Slave”) and desperate women pushed to the brink (“Widows”). But he’s always felt the lives of everyday Black British people, like the West Indian Londoners he’d grown up around, had been largely absent from the screen — which is to say that the cinematic history of the United Kingdom was glaringly incomplete.

“When you’re looking around and you’re not seeing stories of yourselves, or stories in the narrative of the U.K. which haven’t been given a platform, you start to think of yourself as not a part of the narrative,” says McQueen, 51, who was born in London into a Grenadian-Trinidadian family. “But I knew I was real and I knew I existed. And I wanted to make that very clear.”

McQueen’s answer to this cinematic scarcity is “Small Axe,” a film anthology produced by the BBC and Amazon Studios centered around the West Indian community of London that had been integral to his own family and formative years. Spanning the 1960s, ‘70s and ‘80s, and named for a West Indian proverb commemorated in song by Bob Marley (“If you are the big tree / we are the small axe”), the project unfolds over five installments examining the hopes, lives, joys, pain and resilience of a community through generations.

“These stories are the stories of the United Kingdom, of Britain,” says McQueen, speaking via video chat ahead of the series’ Friday Amazon debut. “This is very important that I say this: These stories are British stories.” 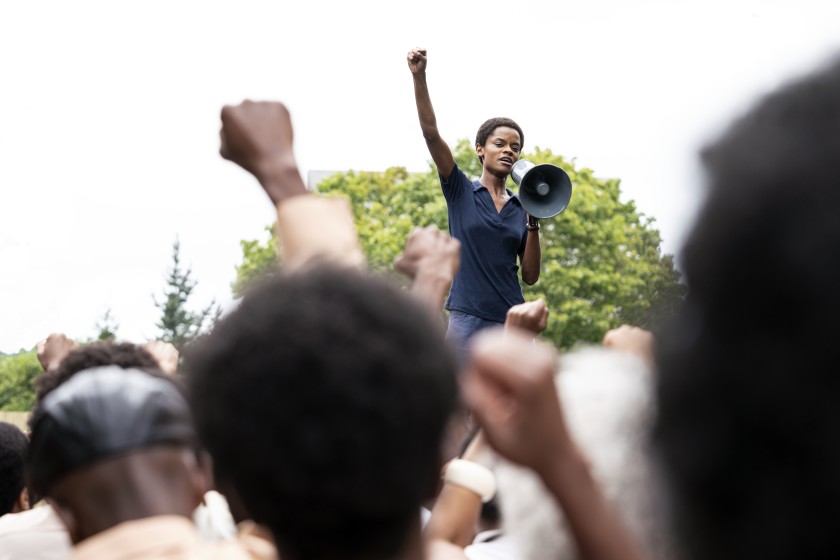 “Mangrove” opens “Small Axe” on a rousing note, a portrait of an immigrant enclave and electrifying courtroom drama telling the true story of the Londoners known as the Mangrove Nine. Written by McQueen and Alastair Siddons (a co-writer on “Small Axe” alongside Courttia Newland), the film takes its title from the West Indian restaurant that Trinidad-born Frank Crichlow (played by Shaun Parkes) opened in 1968 in the Notting Hill neighborhood. The gathering place quickly became a beloved cultural hub for intellectuals, celebrities, artists and community activists — and just as quickly became the frequent target of violent, racially-motivated police raids.

Demonstrating in protest of the sustained harassment two years later, Crichlow was among the nine Black men and women, including Altheia Jones-LeCointe, Darcus Howe, Barbara Beese, Rupert Boyce, Rhodan Gordon, Anthony Innis, Rothwell Kentish and Godfrey Millet, who were wrongfully arrested and charged with incitement to riot and affray. The arrests led to a landmark court case that exposed systemic racism within the police force and impacted the lives of generations of Black Britons to come, says McQueen. Yet their story remained widely untold.

One of the men, Gordon, had even grown up in Grenada with McQueen’s father and would come over to visit when the filmmaker was a child. But McQueen, who was born in 1969, didn’t fully learn about the Mangrove case until decades later; no one who lived through it seemed eager to discuss it. “After the court case there was such PTSD,” he says. “People didn’t really talk about it because of the constant harassment and trauma.”

He saw the Mangrove Nine not just as local heroes, “but national heroes.” And in Crichlow’s story he saw the mythic archetypes of a western: a humble saloonkeeper up against the corrupt sheriff hellbent on taking him down.

Filming on McQueen’s passion project, first conceived more than a decade ago, was underway when he met with Amazon Studios head Jennifer Salke last year in London. Soon after the streaming giant came onboard to co-produce and distribute “Small Axe” in the U.S. and signed the filmmaker to an overall deal, including a sci-fi series which McQueen is also developing.

“It just felt like such a relevant story — and obviously went on to become even more relevant through the times that we’re living in,” Salke says of “Small Axe,” which premieres at the tail end of a year marked by a pandemic, an election and the protest movement for Black lives in America and across the world.

Its nontraditional format, linking five feature-length films set within the same community, also intrigued Salke. “It’s up to the creators and it comes from a creative decision in how you want people to feel when they watch this, what kind of journey do you want to take them on?” she says. “In Steve’s case, he wanted to bring them on a journey of these standalone films that they could think about and find their own connections between.”

Seeding themes and societal forces that recur throughout the series, McQueen describes “Mangrove” as “a small story that gets huge for me.”

“Frank is not an activist,” he says. “He’s just a guy who wants to open a restaurant. Intellectuals and activists come and join and drink and eat local cuisine, and he gets caught up in it. In some ways he stands with them in order to see the fight. There’s no other choice. He became a hero, but he didn’t want to be a hero.” 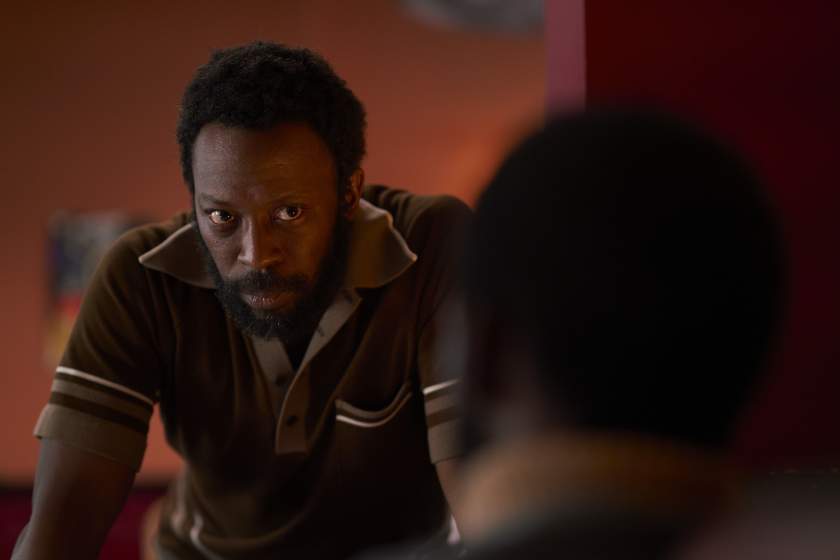 “As an actor I love Shakespeare, but a lot of the time you’re playing roles that you don’t connect with culturally,” says Shaun Parkes, who plays restaurant owner Frank Crichlow. “But then there are these roles where your culture comes into play. And to have something that’s British, Black, honest and real is rare.” Des Willie / Amazon Prime Video

He became a hero, but he didn’t want to be a hero.

To portray the unassuming man at the center of “Mangrove,” McQueen turned to versatile veteran British actor Shaun Parkes (“Moses Jones,” “Lost In Space”). “Frank just wanted to work out what he was cooking on a Saturday afternoon!” Parkes says, echoing McQueen’s assessment of Crichlow, who fought police persecution through the ‘90s and died in 2010 at the age of 78. “All he wanted to do was look at his menu.”

Crichlow had been among a wave of Caribbean migrants who’d come to the U.K. in the 1950s after WWII, first running a popular cafe before opening the Mangrove restaurant. In its first year, police raided it six times. In “Mangrove,” the destruction and terror of these violent incursions builds, their wrenching effects written into Crichlow’s face with stoicism and mounting anguish — until finally he bursts under the weight of it.

“Over the years I think there’s a chipping away at things, at your soul,” says Parkes, who was himself born in London to Jamaican and Grenadian parents. “When you realize the only power you seemingly have is moral, you can only have that for so long before the chipping away has an effect. Then you’re made to do something different, because now it’s about survival.”

Playing the role, says the actor, was an unusually personal undertaking: For one, he knew the late Crichlow’s daughter and fellow actor Lenora, who messaged her support on the first day of filming — “No pressure!” he laughs. Moreover, in a stage and screen career that spanned more than two decades Parkes had enjoyed few opportunities to play characters rooted in his own culture. Filming “Mangrove” often left him thinking of his own father and what his generation had endured.

“It’s very rare I’d go home and be thinking about the scene that we did today, and if I think about it too much I want to cry,” he says. “It’s very rare that that will happen — but it happened on this on more than one occasion.” 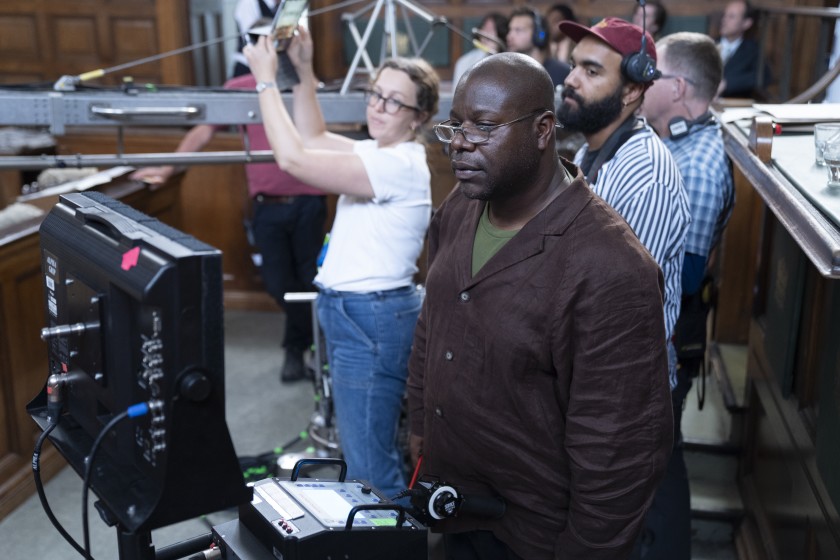 The making of “Mangrove” was also a joyful bridge to the past for McQueen, who re-created the world of his parents’ 1970s London by tapping into the sense memories of his childhood — the smells, the food, the music, the textures. An impromptu singalong to the calypso sounds of Mighty Sparrow, a taste of the sublimely cinematic musical immersion that transpires in the second “Small Axe” film “Lovers Rock,” was inspired by memories of his parents spontaneously singing and dancing.

When “Mangrove” opened the London Film Festival in October, the filmmaker got to see his mother’s emotional reaction. “I think a lot of people were moved by the debut of the film, because they saw a past that they never got to see in that particular manner.”

At the time McQueen had been too young to grasp what his parents were experiencing. Only later did he hear how difficult things were back then; how scary it had been. “I’m very appreciative of my mother’s generation and Frank Crichlow’s generation because of what they went through and what they did for us, and the fact that they stood up and they fought and won,” he says. “What ‘Small Axe’ is about is those small acts of resistance: acts that changed my life and other people’s lives.”

The film tightens in on the battle that’s been simmering as Crichlow, whose formal complaints have fallen on deaf ears, joins with protesters and takes to the streets to decry his treatment at the hands of the authorities. As the ensuing trial stretches on for 55 days, it’s activists like Jones-LeCointe (“Black Panther‘s” Letitia Wright), a leader in the British Black Panther Movement, and future broadcaster Darcus Howe (Malachi Kirby) who urge the group to not only endure, but speak up for themselves.

“We mustn’t be victims, but protagonists of our own stories,” says Jones-LeCointe. 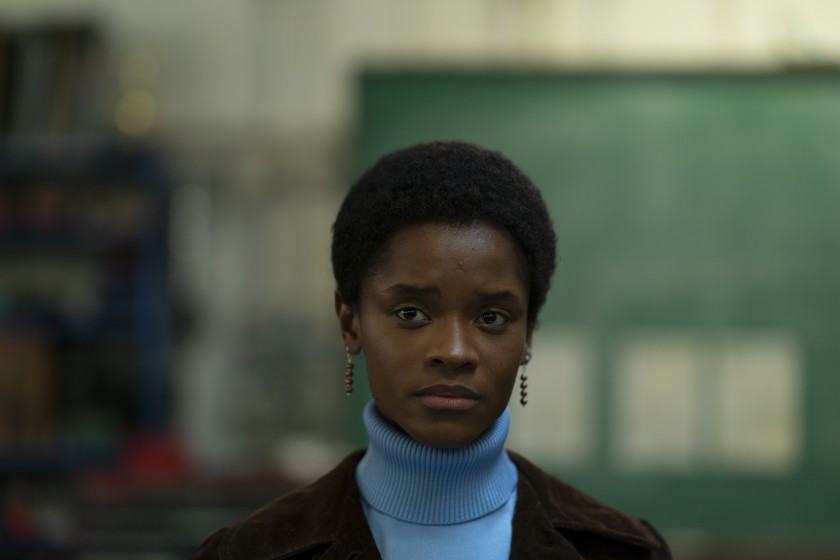 Letitia Wright plays activist Altheia Jones-LeCointe, one of the Mangrove Nine: “She was about getting back to your roots and knowing who we are as a Black people. I loved that about her.” Des Willie / Amazon Prime Video

“It’s Altheia saying, you can’t wait for someone to tell your story or represent you within the criminal justice system,” says Wright, who dove into archival footage, articles and the 1973 documentary “The Mangrove Nine” to research her role. She also spent time speaking with Jones-LeCointe, one of the few surviving members of the group. “I think that was one thing that she really noticed — that in order to represent yourself and get your point across, you have to take the floor.”

The line also speaks to the existence of the project itself. “Being very particular and purposeful in the way we want to tell our stories and not waiting for other people to tell it for us, that’s what Steve has done,” says Wright, who this year launched her 316 Productions banner encouraged by friend and fellow actor John Boyega, the star of the third “Small Axe” installment, “Red, White & Blue.”

From the moment the London-raised Wright read the script during a trip to Trinidad and Tobago near her home country of Guyana, she’d felt the connection to her own family’s history in Britain. In her first meeting with McQueen to discuss the project, she learned why he wanted to make “Small Axe.”

“He emphasized that the generation before us, of the elders that came from the Caribbean, were passing away and they hadn’t seen themselves represented,” says Wright. “It felt like it was a very important time to bring these stories to light.”

Jen Yamato is a film reporter for the Los Angeles Times.