Blaming "Socialism" and "Defund the Police" for the Democratic party's election shortcomings is wrong. A better understanding requires looking elsewhere. 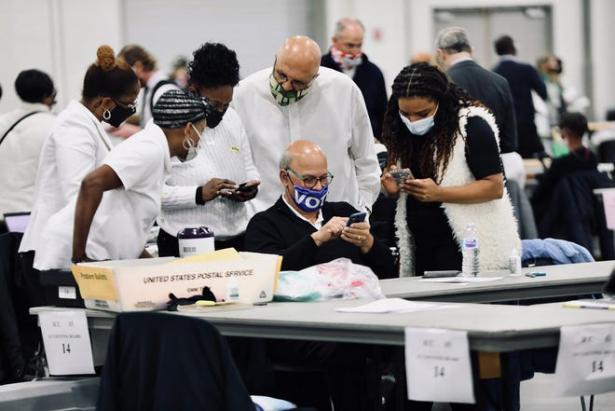 For too many years, Republicans have subjected us to a relentless drumbeat of Big Lies. Now some Democratic Party leaders who traditionally favor the policies of big-donors are treating us to a well-coordinated ride on the Big Spin by blaming "Socialism" and "Defund the Police" for the party's election shortcomings, alleged declines in Latino support, and the loss of Democratic seats in the House. Echoing them are a gaggle of well-paid pundits. I call "BS."

First of all, Biden didn't run on "Socialism" or "Defund the Police." In fact, he explicitly disassociated himself from those positions, and so did most (all?) of the losing incumbents. "Socialism" was Trump's accusation and attack-line against those who support the Green New Deal, Medicare for All, and ending racist police violence. But anything and everything that Democrats propose will always be labeled "socialism" by Republicans because for them "Socialism" isn't a political-economic construct but rather a hate-word, a smear-word against anything they oppose.

I learned that lesson in Selma Alabama when Sheriff Jim Clark called me a "Communist" as he was tossing my badly beaten butt into his cop car. I asked him, "What's a communist?" He knew the answer right off, "A communist is any God-Damned New York kike that wants to allow our nigrahs to vote!" Well, hell, except for the fact that I was from L.A, he had me dead to rights. Ever since, I've refused to accept or give credence to political labels ginned up by racists and Republicans.

Second of all, the actual numbers do not support the claims of the spinners. A simple spreadsheet of election returns and exit-poll data shows no significant shift in the ratio of Democrat vs Republican votes between 2016 and 2020. Exact comparisons are muddied by third party candidates, but if you remove the other candidates the vote shares are:

If ideologies, positions, and slogans like "Socialism" swung voters against Democrats there would have been a noticeable shift from Blue to Red — which there was not. Turnout won the election for Biden. Democrats got 14 million more votes in 2020 than they did in 2016, Trump got 11 million more. It was turnout that turned the table.

Yes, in Miami-Dade there was a swing towards Trump among Cuban-Americans possibly due to the "Socialism" claim and there might have been some small shift in a Texas border county for some reason. But local shifts and outliers do not indicate national trends or movements.

Most of us expected that the Trump/Republican anti-immigrant, anti-Latino, racist rhetoric would significantly increase the Latino vote for Biden. When that didn't happen it was an emotional blow that felt like a defeat. Yet Latinos continued to vote 2-1 for the Democrats just as they have in the past, so offering up politically-motivated spin as to why they (or white suburban women, or this group, or that group), didn't meet our hopes and expectations is an intellectually-shaky proposition because the fault may lie more with our hopes and assumptions than the effect of some slogan or attack.

Democrats did lose seats in the House. But neither Biden nor the losing incumbents ran on, or supported, either "Socialism" or "Defund the Police." And most (maybe all) of the House candidates who did support those or similar concepts won. Yet the spinner's spin is that because some Democrats and some Democratic supporters in some parts of the country called for a Green New Deal, Medicare for All, and Defund the Police, incumbents lost their races, Latinos fell away from the party, and the hoped-for Blue Tsunami we all prayed for failed to materialize.

Really? Let's look at some other possible explanations:

It seems unlikely that the 2008-2016 downward drift was caused by Obama or Clinton running too far to the left. Might it instead not have been the result of status-quo politics shaped and controlled by the big party-donors? In 2020, the Democratic share of presidential votes bumped back up a bit to 51%. Perhaps that's because third-party candidates took 6% of the vote in 2016 but only 2% in 2020, or perhaps it's the result of demanding aggressive action on the climate emergency, quality healthcare for all, and confronting racist police violence.

As they say, "Spinners gonna spin, but we don't have to dance to their tune."

Bruce Hartford was a civil rights worker from 1963 to 1967, first with the Congress of Racial Equality (CORE) and then on the field staff of the Southern Christian Leadership Conference (SCLC) in Alabama and Mississippi. Arrested more than a dozen times, he organized and participated in sit-ins, marches, picket lines, and other forms of direct-action protest.   He was a founder and long-time national officer of the National Writers Union (UAW Local 1981). Since retiring from both the union and technical writing, he has served as webspinner for the Civil Rights Movement Veterans website (www.crmvet.org) and has written extensively about the Southern Freedom Movement