Two weeks from now, the Trump Administration plans to execute a forty-year-old man named Brandon Bernard. His death, by lethal injection, would be the ninth carried out by the U.S. government since July—the ninth, in fact, since 2003. 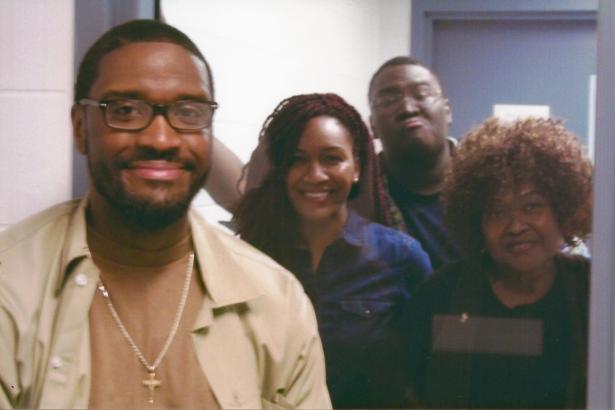 Despite losing the election, the Trump Administration plans to put Brandon Bernard and four other federal prisoners to death.,Photograph courtesy Brandon Bernard

Two weeks from now, the Trump Administration plans to execute a forty-year-old man named Brandon Bernard. His death, by lethal injection, in the federal prison in Terre Haute, Indiana, would be the ninth carried out by the U.S. government since July—the ninth, in fact, since 2003. And four more executions, besides Bernard’s, are slated to take place before President Donald Trump leaves office. For seventeen years, no federal prisoners were put to death in the United States, and both public sentiment and Supreme Court case law have trended against capital punishment. When President Bill Clinton signed the 1994 crime bill, eighty per cent of the public supported the death penalty in cases of murder; only fifty-five per cent do today. (Less than half of the states still execute convicted people.) But, last year, Attorney General William Barr announced that the Justice Department would resume this archaic ritual of violence, with the purpose of “bringing justice to victims of the most horrific crimes.” Andrea D. Lyon, an attorney who represents death-row inmates, wrote that Barr’s decision was “one more stunt to distract Americans from the misdeeds of his boss” and a reckless fulfillment of a promise of law and order.

Bernard has been on death row for half his life. In his teens, he was rebellious, with a record of petty theft but no violent conduct. His mother, Thelma, an Army nurse, had raised him and his two younger siblings after she divorced their father, who drank heavily and struggled with homelessness. In 1999, Bernard, then eighteen, was out of school and unemployed. He joined four other Black teen-agers in what he believed would be the carjacking and robbery of Todd and Stacie Bagley, a white couple, both youth ministers, in Killeen, Texas, near Fort Hood. The five boys were part of a local gang loosely modelled on the Bloods, and Bernard was a low-ranking member. The couple were forced into the trunk of their car and driven around to a pawnshop and several A.T.M.s. At some point, Bernard joined in, and the group’s leader, a nineteen-year-old named Chris Vialva, decided to kill the Bagleys. Vialva shot them point-blank in the head, killing Todd and rendering Stacie unconscious; he used a gun that Bernard had procured. (Bernard maintains that he thought it would be used only to scare someone.) Afterward, Vialva told the others to burn the car, and Bernard went with another boy to buy lighter fluid. That boy testified that Bernard lit the fire, causing Stacie to die of smoke inhalation. Bernard has said in court filings that he helped burn the vehicle, but he believed that the couple was already dead. Because the crime occurred on land owned by the military, the U.S. government handled the case. (Todd Bagley’s mother declined to comment for this story but has said that she supports the execution.)

The three minors involved were sentenced to between twenty and thirty-five years in prison. Two have already been released. But the government prosecuted Bernard and Vialva as adults, and in the same trial. (Janet Reno was then the Attorney General, under President Clinton.) The jury heard unified evidence, despite the difference in the actions of the defendants, whose contrasting demeanors at trial were striking: one juror recalled that Vialva appeared to show no remorse, but Bernard seemed contrite and frightened. The presiding judge, a Reagan appointee who resigned in 2016, while under investigation for sexual misconduct, assigned Bernard a lawyer who had no previous federal death-penalty experience and failed both to call key character witnesses (including Bernard’s juvenile probation officer and a pastor) and to investigate mitigating evidence of childhood trauma; the attorney logged only a fifth of the hours usually spent to prepare for a federal death-penalty case. Meanwhile, prosecutors were allowed to call a forensic psychiatrist named Richard Coons, who billed himself as a “future dangerousness expert.” (A Texas court later deemed him unreliable.) Coons testified that gang members like Vialva and Bernard were likely to join a gang inside prison and would become more violent over time; thus, they were too dangerous to sentence to life in prison. The jury condemned both young men to death.

Gary McClung, who served on that jury and is now a mechanic in Tennessee, told me that Bernard’s sentence is “something that bothered me off and on all these years.” Bernard’s trial attorney seemed to be “phoning it in,” McClung said, in a recent affidavit. “In the case of Mr. Vialva, it just seemed like this was a big inconvenience, but Brandon Bernard seemed obviously broken and afraid,” he told me. McClung and four other jurors have come forward to plead for Bernard’s life, as have a former prosecutor on the case and a former warden of the Terre Haute penitentiary, who cited Bernard’s “record of zero disciplinary infractions.” Since early October, more than eighteen thousand people have written to the White House on Bernard’s behalf, the defense investigator Stacey Brownstein told me, and the Congressional Black Caucus and the U.S. Conference of Catholic Bishops have urged Barr and Trump to call off all federal executions.

Bernard is one of the youngest Americans ever to be sentenced to death by the U.S. government. His family members live in states spread across the South, and can only afford to visit once a year. When they do, they can speak to him only by phone, through a thick glass panel. For the past twenty years, he has not been able to touch his mother, brother, sister, or two daughters, who were born after his arrest. “At every visit, we put our palms up against the glass, but it is a poor substitute for an embrace,” Bernard’s mother wrote, in a clemency statement. Before he was transferred to “death watch,” the last stage before execution, he spent twenty-three hours a day alone in his cell. To pass the time, Brownstein told me, he wrote letters to at-risk youth, prayed—he was raised Seventh-day Adventist, and has become more devout since entering prison—and crocheted intricate blankets.

In 2016, after losing an appeal arguing that he’d been denied adequate representation at trial, Bernard submitted a petition to the Office of the Pardon Attorney, an agency within the Department of Justice that makes recommendations to the President. (Bernard’s most realistic hope is to have his sentence reduced to life imprisonment without the possibility of release.) President Barack Obama did not make a decision on that application before leaving office, though he did commute two other prisoners’ death sentences days before Trump’s Inauguration. Earlier this month, Bernard withdrew his original petition and filed a new one. In September, his co-defendant, Vialva, was executed, at Terre Haute.

Many criminal-justice advocates were disappointed when Obama, who promised to make generous use of his pardon power, let thousands of applications languish. (In 2016, when the backlog reached more than nine thousand, Obama’s lead pardon attorney resigned in protest.) But Trump and Barr’s resumption of the federal death penalty and the rapid pace of federal executions has further undermined the process. The Office of the Pardon Attorney, like so many federal agencies under Trump, lacks a permanent chief and a sense of mission. Rosalind Sargent-Burns, the interim director, supervises a staff that is reportedly demoralized by the White House’s lack of interest—except in pardoning the President’s allies, such as Joe Arpaio, Bernard Kerik, and Rod Blagojevich—and by the timeline imposed by Barr. The Pardon Office’s staff attorneys, who are working remotely, have struggled to evaluate filings that are often hundreds of pages long. (Nicole Navas Oxman, the spokesperson for the Office of the Pardon Attorney, cited the office’s new pandemic protocols and declined to answer questions about the impact on prisoners’ right to due process.)

Bernard and others scheduled for execution this year may have claims for “a denial of the Sixth Amendment right to counsel” owing to the pandemic, Alexis Hoag, a former federal defender and an instructor at Columbia Law School, told me. On account of travel restrictions, Bernard’s defense team has been unable to reach all the relevant witnesses for his clemency application. Another inmate on death row, Lisa Montgomery, who was originally slated to be executed two days before Bernard, was recently granted a stay when her attorneys tested positive for the coronavirus. Earlier this year, a man was executed without his lawyer present, owing to a coronavirus outbreak at Terre Haute.

Robert Owen, a death-penalty litigator who began representing Bernard during his first appeal, told me that he has never seen federal executions so tightly scheduled. In October and November, Owen found himself having to manage both Bernard’s case and that of Orlando Hall, another Black inmate whom Barr had scheduled for death. On November 19th, Hall was executed in Terre Haute, after the Supreme Court overturned a temporary stay.

Owen told me that Bernard’s case is completely “unlike all the other federal death-penalty cases” because of his age and nonviolent history. “Brandon’s diminished culpability jumps off the page to anyone who looks carefully at our pleadings. He is really different in kind,” Owen said. At the end of this month, Owen will meet virtually with the Office of the Pardon Attorney. In addition to his clemency petition, Bernard has motions pending in federal courts in Indiana and Texas, which claim that prosecutors withheld evidence of his peripheral role in the gang—and that his execution should be delayed. Given the current leadership of the Department of Justice, Bernard’s best chance may be to outlast the Trump Presidency; Joe Biden, who once supported the death penalty, has stated that he now opposes capital punishment and has pledged to help eliminate it at the federal level.

Hoag, the former federal defender, said that Bernard and others on death row have become fodder in a partisan debate. “Historically, the death penalty has been used as a political tool, so the Trump Administration, in an election year, looked at resuming federal executions,” she explained. Despite the current Administration’s lame-duck status and the facts of Bernard’s case, Barr is rushing to exercise the government’s ultimate power. The election-year decision to resume and ram through so many executions is cynical and inhumane. An Administration spurned by a majority of voters should not have the right to send Bernard or anyone else to their death.

E. Tammy Kim is a reporter and essayist.