Our research, drawing on interviews with nursing aides and emerging studies of other essential workers during COVID-19, shows how employee policies, particularly for low-paid aides, have sharply raised the risks... 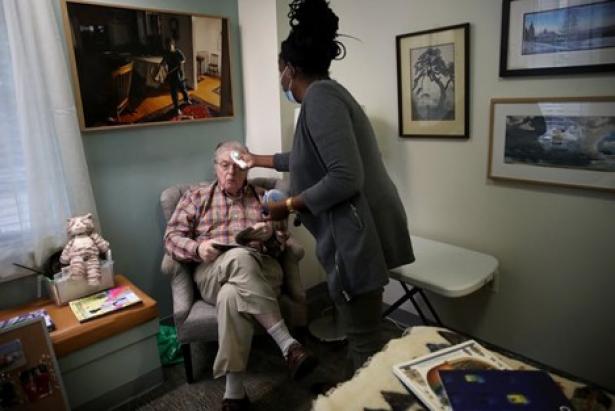 In assisted care facilities and nursing homes, residents are often in contact with many staff members and one another., Craig F. Walker/The Boston Globe via Getty Image

The COVID-19 pandemic has devastated America’s nursing homes, but the reasons aren’t as simple as people might think.

To understand how nursing homes became the source of over one-third of U.S. COVID-19 deaths, you have to look beyond just the vulnerability of the residents and examine how nursing homes pay and manage their employees.

The average nursing aide earns just $14.25 an hour, less than $30,000 a year. Many are women who work at multiple nursing homes to make ends meet. Partly as a result of that, the typical nursing home has staff connections to 15 other facilities – each an opportunity for the coronavirus to spread. That risk is magnified by a reluctance among many nursing aides to take sick days when they are ill, even though federal law currently requires employers to provide paid sick leave for coronavirus-related reasons.

An alarming number of infections in long-term care facilities – nearly half – have been traced to staff who work in multiple health care facilities and who engage in “presenteeism,” meaning they continue to work even after being exposed to or falling ill from COVID-19.

As law professors who specialize in employment, immigration and health law, we have spoken with many nursing home aides to try to understand why this is happening and find ways to avoid it. The story of one of them represents what many others have experienced. We’ll call her Salma rather than use her real name to protect her from retaliation.

Like about a third of nursing aides, Salma is an immigrant. She often spends 12 hours a day cooking, cleaning and caring for residents’ most intimate needs, such as bathing, dressing, feeding and providing medication.

When Salma fell ill earlier this year, she requested paid sick leave, but her employer refused to provide it. She tried to assert her rights under her state’s paid sick time law, but she said her employer responded by threatening to report her to immigration authorities. When she explained that she had legal status, Salma said, her employer changed tactics and threatened to report her to the Internal Revenue Service because no payroll taxes had been deducted from her wages, as she was paid off the books. Salma was afraid she would lose her job, so she continued to go to work.

Our research, drawing on interviews with nursing aides like Salma and emerging studies of other essential workers during COVID-19, shows how employee policies, particularly for low-paid aides, have sharply raised the risks, and how access to paid sick leave could lower them.

Historical records from previous outbreaks in the U.S., including the 1918 influenza pandemic and the 2009 H1N1 epidemic, show that immigrants and people of color are more likely to contract and die of infectious diseases. While preexisting conditions account for the severity of illness, they do not explain why these segments of the population are more likely to become sick in the first place.

Data show this is due to large percentages of immigrants and people of color performing essential labor, such as nursing aide roles, that requires close contact with many other people.

Our research asks why nursing aides are more likely to spread the virus. To answer this question, we examined laws and policies that affect them, including paid sick time.

San Francisco became the first U.S. jurisdiction to require paid sick leave in 2006. Other cities, counties and states followed, and now there are approximately 40 of these laws nationwide.

Paid sick leave laws require employers to pay workers who take time off when they or any family members are sick, injured or seeking medical treatment. Some laws explicitly allow for paid sick leave during a public health emergency, such as COVID-19. Most are based on an accrual model. This means employees must earn paid sick time hours; typically one hour of paid sick leave is earned for every 30 hours worked. Local paid sick time laws apply to private-sector employees and, in some cases, state and local government employees.

In March 2020, Congress passed the nation’s first universal paid sick leave law. This emergency law, which expires at the end of the year, provides most employees in the country with up to 80 hours of paid leave if the worker has been exposed to, is ill from, or is caring for someone infected with COVID-19.

However, a large survey earlier this year showed that many essential, low-wage employees still could not access paid sick leave after the law went into effect. That survey and our research show that these employees tend to either believe they have no right to paid leave or that their employer will retaliate if they try to use it. Many fear they could lose their jobs.

Even a short period of lost income can be financially devastating for these individuals. Among Latina essential workers, 43% surveyed said that even while employed they didn’t earn enough to adequately provide food for their families.

How to make sick leave work as intended

So, can paid sick leave laws be made more accessible for essential workers like Salma?

Our research highlights both the inadequacies of existing laws and policies and what might be done to strengthen them.

Second, most of these agencies are highly centralized and do not conduct effective outreach to immigrant communities, so both employers and employees are often unaware of paid sick leave laws. A handful of states and local governments offer pioneering examples. Massachusetts, for example, posted guidance online in multiple languages about sick leave and other workers’ issues. Washington, D.C., conducted tele-town halls with strategies to help workers and employers understand their respective paid sick time rights and obligations during the pandemic.

An approach that both empowers employees while informing employers about the benefits of paying employees to stay at home when sick can help save lives.