labor The Clapping Stopped, but the Risks to Health Care Workers Didn’t

Hospital laundry workers and other nonmedical staff are facing the same dangers during the pandemic, with little recognition. It’s been a radicalizing experience. 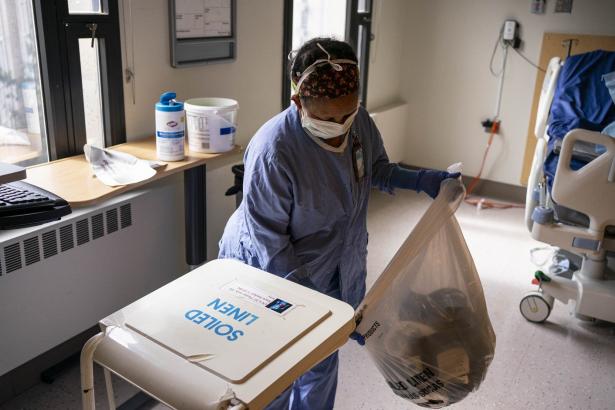 At 50 years old, and with three kids, Brígida Vidal struggles to keep up with the mountains of dirty linen she is expected to sort through each day at the industrial laundry plant where she works in New Jersey. Unitex, where Vidal is employed, is responsible for disinfecting patient bedsheets, gowns, and other linens for New York City area hospitals, including NYC Health + Hospitals, by far the largest municipal health care system in the United States. The stress of the job—and urgency of the work—has only increased as the pandemic has taken hold. According to Vidal, the soil room where she spends most of her time is poorly ventilated and social distancing is seldom enforced. In April, as New York emerged as the epicenter of the pandemic, with nearly 220,000 people in the tristate area having been infected and more than 9,000 recorded deaths, Vidal began showing symptoms consistent with Covid-19.

The union has been in battles at various Unitex facilities for years, but for Vidal, the pandemic was the last straw. “I’m going out on strike because they are threatening us to take our health insurance away and they want to take our bonus away,” she said. These things were the difference, she felt, between securing her and her family’s future or living in a perpetual state of insecurity.

On November 18, Vidal joined scores of mostly immigrant women hospital laundry workers employed by Unitex for a two-day unfair labor practices strike, over what they claim to be the company’s numerous illegal threats to fire workers who go on strike. Workers at Unitex’s two facilities in Mount Vernon, New York, also walked off the job to honor the picket line. Negotiations between the company and the Laundry, Distribution, and Food Service Joint Board, Workers United/SEIU, the labor union representing the workers, broke down during the previous weeks, after Unitex continued to push the conversion of the current pension plan into a 401(k) for new hires and proved unwilling to meet worker demands about safer working conditions at the company’s Perth Amboy, New Jersey, plant, situated just outside New York City.

With cases rising in New York and New Jersey, and the pandemic surging across the country, the Unitex workers’ strike is just one example of a nationwide wave of labor militancy by essential medical and nonmedical hospital workers who are fighting for workplace protections, health care, and fair wages.

There’s been a lot of talk since the start of the pandemic about the critical role essential workers play in keeping the country afloat. People clap, or they used to, for health care workers, a small way to acknowledge the sacrifice and risk involved in the work of keeping people alive. But the public health crisis has also exposed the inequities that are ingrained within our nation’s health system—not just in how people access care but how different workers are treated inside that system. That includes women like Vidal, who are not often part of the celebration of “health care heroes.” Worker organizing, and a wave of strikes and strike threats, are attempting to bridge the gap between rhetoric and reality—to make their lives and livelihoods just as essential as their work.

Over the past several months, hospital workers in Chicago, Northern California, Maine, Southern California, and Reno, Nevada, have either gone on strike or threatened to do so. Earlier this month, 800 nurses in Bucks County, Pennsylvania, walked off the job in protest of unsafe staffing issues. According to Professor Robert Anthony Bruno, director of the Labor Education Program at the University of Illinois at Urbana-Champaign, the pandemic has exposed the underlining flaws of the for-profit medical system. “The structure for how health care is provided, fueled by exorbitant profits, is going to make the worker begin to feel that they are just a cog in a machine and expendable,” he said.  “That’s definitely going to fuel militancy.”

Workers at Unitex’s New Jersey plant soil room, on average, earn $12.50 an hour. And yet Unitex, with 1,500 workers at 12 plants on the East Coast, is the largest family-owned health care service provider in the country, bringing in $150 million in annual revenue as of 2014. (Unitex did not respond to questions about working conditions.)

Low wages are pervasive in the health care industry. According to a recent study conducted by the Brookings Institution, median wages in health care support, service, and direct care jobs were just $13.48 an hour in 2019, far lower than the median hourly pay of doctors and nurses. Wages are so chronically low that 15 percent of care workers live in poverty and over 40 percent are dependent on public assistance. Much attention has been paid to the plight of nurses and doctors, but the workforce that is primarily responsible for cleaning and maintaining hospitals has been made largely invisible, despite the vital role it serves in ensuring the hospital’s safety.

“There is a misconception … if you work in a hospital, that you’re probably in a high salaried job, but I think people will be surprised by the bifurcation that exists,” said Bruno. “Even below the rank of nurse, you have thousands of people—people who are cleaning linen, preparing meals, mopping up floors—who are making very low wages, with many making below minimum wage.”

The demand for wage increases was partly what motivated nearly 4,000 hospital workers at the University of Illinois Hospital in Chicago to go on a massive, weeklong strike in September. Workers were able to win a $15-an-hour wage after they filed 20 complaints with the city alleging the university paid them below Chicago’s mandated $14 minimum wage. Although workers had been planning a strike for some time, according to the union, it was the pandemic that finally allowed the multitude of wage and safety concerts to coalesce.

“Originally we planned on striking in the spring before Covid really took off, but once it hit, it threw our plan into disarray,” said Adrian Rojas, a spokesperson for SEIU Local 73. But the crisis “ripped off the bandages that workers were used to from management and made a lot of the issues like safety, pay, and staffing even bigger concerns.”

In Reno, over 700 members of the Communications Workers of America Local 9413 union have been engaged in a bitter, 10-month struggle with the parent company of Saint Mary’s Regional Medical Center over benefits and wages. The union represents the hospital’s custodians, food service workers, technicians in various departments, and certified nursing assistants. According to the union, Prime Healthcare Services, the hospital’s owner, has been attempting to change employees’ health coverage while also proposing to raise co-pays. The union has also protested the lack of adequate personal protective equipment.

“In this age of Covid, you want to feel secure if you’re a health care worker, that you’re going to be taken care of,” said Marc Ellis, the president of Local 9413. “Instead, we got to live in stress worrying that their health care might get worse.”

With Covid-19 rates surging in Reno, Ellis warned that an underpaid and undervalued workforce will harm employee morale and damage workers’ ability to do their jobs. “Let me be 100 percent honest and put all my cards out: In the healthcare industry, the last thing you ever want to do is strike, especially in the middle of the pandemic. That’s why we haven’t been on strike yet. But I will not continue to hold out if the company is not willing to bring something reasonable to the table.”

Workers such as Vidal, who immigrated from Oaxaca, Mexico, in search of a slice of the American dream, have found working during the pandemic to be a nightmare. Although she was ill with Covid-19 before, she says she still lives in a state of constant fear of becoming sick again or potentially getting her family sick. “I am very scared for myself but mostly for my family because I’m afraid that I will contaminate them.” It’s been a long nine months since the start of the pandemic. Something has to give, she said. “I refuse to be afraid any longer.”