Groups go to court to reverse wrongful purge of 200,000 voters that could have significant impact on the election's outcome. 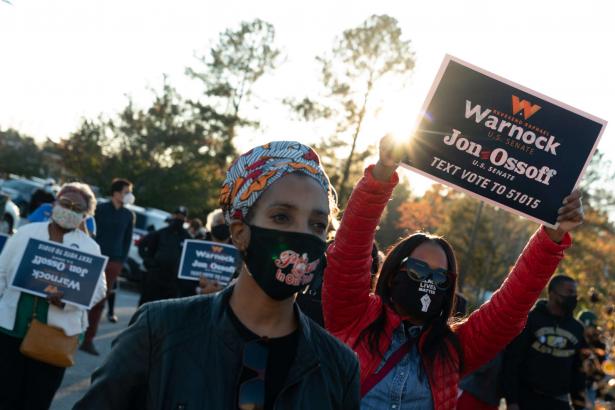 A report in September revealed that nearly 200,000 people have been purged from the voter rolls in Georgia, and investigative journalist Greg Palast, Black Voters Matter and other activist organizations are trying to make sure those folks have a right to cast their ballots in the Jan. 5 runoff, which will determine who controls the U.S. Senate.

Palast, whose investigative work (pdf) serves as key evidence of the lawsuit, told The Root that the state of Georgia illegally took people off the rolls and that he and his fellow plaintiffs expect a federal judge on Thursday to reverse the state’s decision. The lawsuit is also challenging the state’s “use it or lose it laws,” which take voters off the rolls if they have not voted in several elections or if a resident has mail returned. The secretary of state, the lawsuit alleges, assumes people have moved if they haven’t had contact with an election official in three years, voted in the “next two federal elections” or if mail is returned.

Palast added that some of the people on the purge list did not know about the state’s actions, including some Republicans. At the heart of the lawsuit is the argument that the state used unlicensed vendors to determine who no longer is eligible to vote.

By Georgia law, if you move away from your district, you are no longer eligible to vote. Residents usually fill out change of address cards at the post office to verify the move. Under the National Voter Registration Act of 1993, no citizen can be removed from voter rolls unless there is reasonable evidence that the person changed their registered jurisdiction or other reasons outlined in the act. The problem is that the state, the lawsuit claims, did not use a vendor licensed by the United States Postal Service to determine if the people they pulled off the rolls actually moved. According to Palast, there are 18 eligible vendors the USPS uses to determine correct mailing addresses, none of which Georgia’s secretary of state used. Palast hired several USPS vendors to verify the state’s list and found most of the people did not move.

Comparatively, Palast says the state hired “some guy who lives on a golf course in Nebraska” to verify the state’s list.

After an extensive investigation, Palast and the ACLU of Georgia published their findings in September that revealed, of the 313, 243 people the state took off the rolls, 198,351 still resided at their addresses. That is an error rate of 63.3 percent, according to Palast’s findings. The ACLU of Georgia presented these findings to Secretary of State Brad Raffensberger, who, Palast said, rejected their findings. He said he gave Raffensberger 90 days to review their findings before filing the lawsuit challenging the state to restore those voters back to the rolls. Palast believes the state purged these voters because the GOP believes higher turnouts don’t favor them.

“When maintaining the voter rolls becomes a mass purge of voters you don’t like, then it’s just Jim Crow,” he said. “It’s changing white sheets for spreadsheets.”

Lawyers working on behalf of the plaintiffs are the best civil rights experts in America, including Fred Grey, whose client list includes Dr. Martin Luther King Jr., Claudette Colvin and Rosa Parks, who were charged with disorderly conduct for refusing to sit at the back of the bus, as well as Tricia “CK” Hoffler and Barbara Arnwine.

Palast said he and the other plaintiffs are confident the judge will rule in their favor Thursday. “This stuff is highly technical,” he said. “They never thought they would get caught.”

Beyond the lawsuit, the ACLU of Georgia is collaborating with the Lawyer Committee, Coalition for the People’s Agenda and other groups to ensure voters are protected during the runoff and encourages anyone who runs into issues to call the Election Protection Hotline at 1-800-OUR VOTE. They are also recruiting and training poll workers and expect to deploy 2,000 of them to work for the counties on the day of the runoff.

Republicans are already playing voter suppression games in Cobb County, the state’s third-largest county, by opening fewer than half of the early voting locations. Citing low staff numbers, local officials said keeping all the stations open is too heavy a burden for their office.

“It was not our desire to reduce the number of early voting locations for the runoff, but unfortunately it became a necessity,” Janine Eveler, the Cobb County director of elections, said in a statement, the Times reports. She said that the county lost some managers to holidays, a continuing workload from the November elections and the pandemic. “We are at the end of the election cycle and many are tired or just unwilling to work so hard, especially during this time of year.”

Biden won the county by more than 14 percentage points.

Andrea Young, head of the ACLU of Georgia, sees the voter suppression tactics Republicans are playing akin to changing the rules of an NFL game.

“It’s kind of like being in the middle of a football game and somebody says, ‘Oh no. It takes 20 yards to get a first down. Not ten.’ So they’re trying to change the rules in the middle of the game,” she told The Root. “We’re constantly fighting that at the same time we’re trying to make people understand this is not over. I am telling folks there is no better Christmas present you can give your loved ones than your vote in this runoff.”

While the lawyers are handling the legal battle, LaTosha Brown, co-founder of Black Voters Matter, is in the streets organizing people to turn out again, as she believes an overperformance is required to overcome the state’s voter suppression efforts. Keep in mind that Gov. Brian Kemp, as secretary of state, stole the 2018 gubernatorial election from Stacey Abrams, so he has no incentive to ensure the integrity of the 2020 election.

Much of Black Voters Matter’s work focuses on educating voters around poll watching and ensuring they understand how to protect themselves against any form of voter intimidation and disinformation. But when asked what she feels is driving the GOP’s voter suppression tactics, Brown hesitated for a moment before making it plain.

“The majority of white people in this country do not believe in democracy,” she told The Root. “Democracy has been used as a frame to justify white control of everybody else in this country and globally. The idea of democracy has been used as a talking point to validate a government of superiority, of American exceptionalism. The actual value of democracy, the majority of white America does not believe in it.”

Since the 1990s, Democrats have won just one of seven runoffs in Georgia, according to Mother Jones. But this year is different because activist groups with millions in cash to boot have engaged the state’s growing majority-minority population for at least four years and saw progress in 2018 and victory in 2020 with Biden winning the state. Also, civil rights groups have learned from 2018, challenging state signature match laws with some success. Basically, it is harder for Republicans to cheat now because activists are aware of their tricks and have defenses and offenses ready for them.

Then, there is the infighting with state Republicans. Senators David Perdue and Kelly Loeffler have called on Raffensberger to step down after refusing to entertain President Trump’s bogus claims of voter irregularities. Trump is maligning Kemp for refusing to overturn the election results, which he doesn’t have the power to do anyway.

Besides the momentum of Biden winning the state, the Democratic candidates are giving voters hope, Brown said. Warnock, pastor of the very church in which Dr. King preached, carries a lot of weight with Black voters because of the cultural importance ministers have in our communities. Then there is the state’s poor management of the pandemic and its blatant attempts at voter suppression that Brown believes will energize people to defy the Republican leadership.

Above all, Brown believes Georgia is in play and state Republicans know the days of getting away with blatant voter suppression unchallenged will not go unnoticed and without a fight.

Terrell Jermaine Starr is a senior reporter at The Root. He is currently writing a book proposal that analyzes US-Russia relations from a black perspective.  terrell.starr@theroot.com   On twitter: Russian_Starr