film 'Nomadland' Is A Tender, Unflinching Look At the People the America Dream Has Failed

Frances McDormand is naturally great in Chloé Zhao’s adaptation of a book about older Americans who give up the security of home for the hope of work. 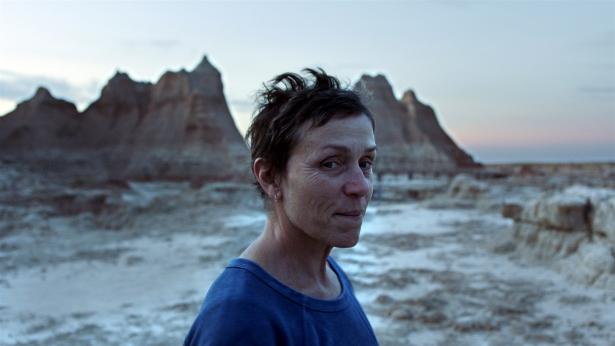 “Nomadland,” Chloé Zhao’s latest film, is nominally a quiet portrait of a working-class woman, Fern (played by Frances McDormand), who lives in her van and works piecemeal manual labor jobs along the West Coast. But, really, it’s intended to illustrate a particular slice of America where the social safety net has failed — and what happens when the house in which you’ve lived is taken away, when the Social Security you’ve paid into for 50 years isn’t enough to retire on, when your loved ones all die and when it seems the only thing to do is leave it all behind.

Based on “Nomadland: Surviving America in the Twenty-First Century” by Jessica Bruder, McDormand’s Fern is at loose ends after the small town, Empire, Nevada, that she lived in with her late husband — a real place that was turned into a ghost town by a mine closure — closed up shop.

No longer housed inside of four solid walls, with little steady income, Fern is making due where her old life left off — sort of.

Then, while working a seasonal gig at Amazon, Fern meets an older woman, Linda May, who befriends Fern almost against her will. They’re both parked in an RV lot, both living in their vans — along with the other seasonal laborers whose parking spots are paid for by the retail behemoth.

Soon, that job ends, and with it, Fern’s last remaining tether to her old life. “I need work,” she tells a woman, whose job it is to help her. “I like work.”

What happens when the house in which you’ve lived is taken away, when the Social Security you’ve paid into for 50 years isn’t enough to retire on?

Well, there is no work, so she heads to a gathering that May told her about — the Rubber Tramp Rendezvous, where nomads meet to kibbitz, attend seminars, share hot meals, find out about other campgrounds, learn skills and trade household goods.

Fern thus finds her community, which is comprised of people who have chosen or been forced into peripatetic lives.

McDormand and David Strathairn — who plays a doe-eyed nomad who likes Fern’s prickly company — are the only professional actors in the movie, although everyone was paid for their work. Some of the people Fern meets were also featured in Bruder’s book, including: the nature-loving Swankie, who decided to spend her last few months on the road instead of in the hospital or at a hospice; Bob Wells, the founder and president of RTR, as it’s known, whose website Cheap RV Living offers endless resources on how (and why) to make your life on the road; and Linda May, whose friendship sparks Fern’s journey.

The other people who make appearances are nomads that Zhao and her team met while traveling and filming, and whose stories were incorporated into the narrative.

Most — though not all — of the people in “Nomadland” are older, white working-class people and, though the film avoids being overtly political, it’s impossible to avoid the greater context of our current political milieu. While we’ve suffered through seemingly endless (and endlessly pedantic) interviews with people who voted for Trump seemingly against their best interest, “Nomadland” subtly illustrates why, as well as how our society has failed so many people, without being condescending to anyone.

"Nomadland” allows people to share their own stories without judging them.

Though obviously filmed long before the pandemic, we can all now clearly see how the lack of a safety net plays out more broadly during a national crisis. People are turning more and more to ad-hoc mutual aid organizations for food, clothes and tents, even as winter is coming and infection rates are rising. Yet, the federal eviction moratorium is ending at the end of December, a federal stimulus package languishes while the Senate squabbles and another Covid-19 spike is happening while our lame-duck president golfs and retweets conspiracies about the election; there’s no concrete relief in sight for people who will be cold, sick, homeless and/or incomeless on Jan. 20.

It would easy to parachute into a place like RTR — or, say, the Appalachians — and conjure up some tragic slice of life for audiences to pity, but “Nomadland” allows people to share their own stories without judging them. Fern’s stubbornness clearly helps her survive; what audiences are only left to wonder is whether it helps her thrive. At times it seems her nomadic lifestyle is a choice, especially when Fern is dropped into more domestic surroundings with people who seem to love her and she opts out again.

But the movie forces us to question our assumptions there, too: Do they love her the way she needs to be loved, freely and without strings? Do they accept her the way the other nomads do, without question? It’s clear Fern, like many of the people she meets on the road, has lived through painful things — as have we all. Becoming a nomad doesn’t seem any better or worse than the choices any of us make, or are forced to make, in the face of adversity.

“Nomadland” is the sort of quiet, sprawling movie that makes me miss movie theaters (where it is set to open in 2021 after an award-qualifying weeklong run this week). Sure, I’d love to see the new “Wonder Woman” (or Zhao’s upcoming Marvel movie, “The Eternals,” which opens in February) with a crowd of fans and a big bucket of popcorn in my lap, but this modern American road trip movie is the kind of expansive, meditative film that demands the same kind of physical space as a blockbuster, along with patience and compassion — which is something we could all use more of these days.

Jenni Miller is a freelance writer who covers movies, TV, sex, love, death, video games and assorted weirdness for a variety of publications online and in print.