books Revolutions of the Past and Future

Here is a study that seeks to offer insight into the writing of a great classic of revolutionary history. 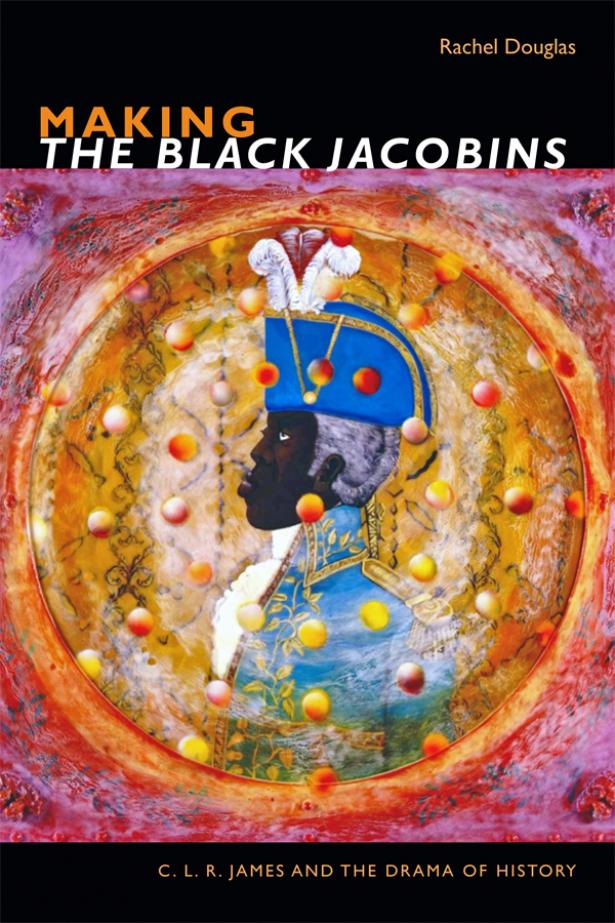 In the same way that there are poets’ poets and communists’ communists, Rachel Douglas is a C.L.R. James scholar’s C.L.R. James scholar. Making the Black Jacobins synthesises the many versions and marginalia of James’ work on the Haitian Revolution. By taking account of each separate rendition of the story, it has done scholars of Caribbean revolutionary history an immense service. Attention to the torsions of history as drama and drama as history have been the basis for a number of studies of James’ The Black Jacobins in recent years, in particular Jeremy Glick’s The Black Radical Tragic. Adding to this wave, Douglas reminds us that written history not only aligns or experiments with generic conventions, but is also an act undertaken by an author in a social context and under specific political conditions. In James’ case, real life contingencies are preserved in manuscripts, papers, archives, notes and ephemera. They are not epiphenomenal to the author’s published work but allow us to understand books as provisional and unfinished objects.

The Black Jacobins, a book of history published in 1938, is the most famous work of the great Trinidadian historian and theorist, but Douglas introduces us to its predecessor: the 1936 play Toussaint Louverture. Then, following the 1963 updated edition of The Black Jacobins – whose additions are the subject of David Scott’s monumental study, Conscripts of Modernity – we learn of the second stage play written by James in 1967, also called The Black Jacobins. Douglas observes that most scholarship has conflated or neglected the multiplicity of texts and genres at work in James’ Haitian preoccupations. Reading across history and theatre while using an intellectual-historical methodology based in the material archive, Douglas’ transparent prose finally lays textual conflation to rest. Making the Black Jacobins examines the many revisions that exist in both genres over the course of four decades, in order to interrogate how drama and history inform each other across James’ life, and, in many ways, across the arch of twentieth-century anticolonial thought.

In Scott’s now famous argument, the narrative of the 1938 version of The Black Jacobins can be described as a romance, according to Hayden White’s theory of historical emplotment, while the 1963 version is written as a tragedy. What Douglas shows most powerfully in her analysis is that the transformations to which James subjected the history of the Haitian Revolution chart a series of important clarifications in his conception of emancipatory politics in general. Because these transformations are not unique to James, but represent broad tendencies within the international socialist movement as a whole, the story of James’ mutability as a historian is ultimately a story about the mutability of the past and its relationship to future histories. It was James’ goal in 1938 to write about the 1804 revolution in Haiti in order to bolster coming revolutions elsewhere. Douglas writes, ‘From the overall pattern of historical developments that James outlines throughout his narrative, he repeatedly stresses their special significance for the coming emancipation of, and anticolonial revolution in, Africa …’ When those revolutions came and went, James’ 1960s revisions were shaped in order to adumbrate new insurrections and new forms of self-determination that have not yet come to pass. These emphases offer still-relevant tools for understanding the relationship between revolutions of the past and revolutions of the future.

Following Jeremy Glick’s argument that ‘that tragedy is there all along already in 1938’, Douglas counters the claim of historical emplotment by situating James’ work in its political time. Drawing on the history of Marxism, Douglas shows how the tragic elements of James’ 1938 study occur as ‘the tension and gap between the individual and the mass base.’ This tension grows over the course of several decades, brought about by James’ own political activity and involvement with world-historical events. The revisions made in the sixties concern, therefore, theoretical changes that correspond to the increasingly important rejection of traditional notions of party, vanguard and authoritarian leadership within James’ thought in the second part of the twentieth century. The Black Jacobins texts of the sixties, especially the 1967 stage play, underscore the revolutionary character of ‘ordinary’ people and prioritise what James called ‘the question of power’, hinging on the spontaneity of the masses. If Toussaint Louverture, as revolutionary leader and military mastermind, occupies the central place in the story of Haiti’s independence for James’ work of the thirties, he will fade more and more into the background with later versions. James will move ‘obscure leaders’ and dissidents to centre stage, both metaphorically and literally, in line with his own shifting conceptions of popular power and workers’ democracy. James’ rejection of the vanguard model of revolution came through the elaboration of new Marxist theories of struggle produced among comrades in the Johnson-Forest Tendency and later in the Correspondence Publishing Committee and Facing Reality. These new approaches to contemporary struggle effectively drew historical figures (such as Moïse) out of the shadows of Haitian history and pulled Toussaint ‘The Opener’ down from his pedestal in the literature of Afro-diasporic revolt. Having taken certain cues from Daniel Guérin’s study of the French Revolution, James fades the spotlight on the Black Jacobins, pivoting it to illuminate the Black Sansculottes.

Douglas shows us the lengths to which James deployed ‘quarreling’ against racist historians as an important mode in his writing process. In this, James is not only setting things straight, so to speak. Rather, he is returning to the revolutionaries of 1804 their heroism and fear, their failures and their brilliance. By following the principles of quarrelling, rewriting and collaboration, Douglas embarks upon a tale of revisions, friendships, transitions and experiments. This tale contains political concerns such as the American occupation in Haiti (1915-1934) and the invasion and brutal colonisation of Ethiopia by Mussolini’s army in 1935. It also contains collective projects such as James’ antifascist and anticolonial organising with George Padmore in the International African Friends of Abyssinia (IAFA) and later the African Service Bureau. James’ collaboration with communist actor Paul Robeson, who starred as Toussaint in James’ 1936 stage play, is shown to have transformed the Trinidadian’s ideas about presenting ‘the image of history as theatre.’ Essential for scholars of anti-imperialist Marxism is Douglas’ treatment of the communication between James’ history of the Haitian Revolution and Trotsky’s History of the Russian Revolution. Douglas uncovers the research and writing contributions of Eric Williams to The Black Jacobins history book, and examines links to Williams’ famous study, Capitalism and Slavery. We are also offered a candid portrait of James in Paris in the mid-1930s, undertaking his Haitian research and making important contacts, such as Pierre Naville and Léon-Gontran Damas.

In her analysis of the addition of the appendix to the 1963 version of the history, we learn about the role played by the Cuban Revolution in James’ reimaging of 1804, focusing on the vital significance of ‘the past and future of the islands’ of the Caribbean in relation to the history of the present. James’ rewriting for the 1963 version captures not only his renewed vision for Caribbean emancipation, but underscores his 1938 forecasting in order to render the ‘logical and historical’ connection between Dessalines’ Haiti, Castro’s Cuba and the future revolutions that promise to transform the region. Douglas concludes the book by exploring the afterlives of James’ Haitian works, demonstrating how they moved across borders, languages and expressive forms. Producing historical accounts as political solidarity is not unique to James, as Marxist historians across the twentieth century often united partisan inheritors with the specific political pasts that formed them. But in James’ case, the theatre became an equally important tool for writing history against the ‘imperial archive’, exploiting its particular capacities and freedoms in order to enact the ‘history from below’ that his 1963 revisions had begun.

As the late Michael Dash noted in 1974, ‘one feature of Third World writers which distinguishes them as a distinct literary fraternity is the fundamental dialogue with history in which they are involved.’ In each new textual rendition of the Haitian event, James was set on defeating the ‘imperialist treachery and hypocrisy’ of historical reception, but, in doing so, he accentuated the changeability of the past, putting onto the table questions of historical movement and non-synchronicity. Douglas, in developing a deeply historical view of the writing of political history, continues the specifically anticolonial conversation on revolutionary temporality, its plurality and untimeliness. Marxist theory has seen a renewed interest in the politics of untimely temporality, as scholars revisit these notions in the work of Bloch, Gramsci and Althusser. However, the most robust meditation on this theme has arguably been had among Caribbean political intellectuals of the twentieth century and scholars of these thinkers in recent decades. Indeed, the Haitian Revolution has been called a ‘prophetic vision of the past’ by Édouard Glissant, and was the basis for Aimé Césaire’s ruminations on the proleptic eruption of the past into the future, generating a sort of ‘now-time’ reminiscent of Walter Benjamin’s theses ‘On the Concept of History’. What Douglas describes as the ‘positive untimeliness of The Black Jacobins’ is best understood when situated in the changing history of James’ political positions and collective engagements; it is necessarily subject to modifications produced by its reception beyond James’ lifetime.

Scott’s 2004 intervention against the romance of anticolonial revolution was made in a ‘time of postcolonial crisis in which old horizons ha[d] collapsed or evaporated and new ones ha[d] not taken shape.’ The pessimism of the interregnum is based in the very real failures of nation-states and dependent territories throughout the Caribbean in the twenty-first century. But if The Black Jacobins has again recently become a source for nourishing the ‘longing for revolution’, to use Scott’s phrase, perhaps it is because new horizons of transformations have become apparent. As the United States enters a historical moment in which the call for the abolition of police has taken on certain mainstream dimensions, we must ask if this non-trivial shift in the white imagination deserves a healthy dose of revolutionary optimism. Uprisings of the last five years alone – including in Haiti – show that the aspiration for comprehensive social transformation is constant.

This is not to deny the resilience of reactionary formations or to downplay the harrowing plasticity of racial capitalism but there is every reason to believe that any time history could give itself over to a conjuncture as radical as decolonisation. Despite its shortcomings, James saw the destruction of ‘eternal’ European empires and the restoration of Third World sovereignty as an event that ‘shattered the foundations’ of the Old World. If The Black Jacobins projected itself, as a ‘prophetic vision of the past’, into a decolonial future in which ‘the world ushered in by Christopher Columbus and Martin Luther’ ceased to exist, what kind of revolutions will James’ sixties revisions foresee? There is a mass longing for integral and systemic change, which recognises the primary of race and racialisation in structuring contemporary existence, from the materiality of our labour to the immateriality of our desires. This is not a romance. It is simply the willingness to believe, as people have historically believed, desperately and euphorically, in something beyond the boundary of the present.