President Trump bribed Morocco into normalizing relations with Israel by turning the US into the only country in the world to recognize Morocco’s annexation of Western Sahara, and thereby plunging an already volatile region deeper into crisis. 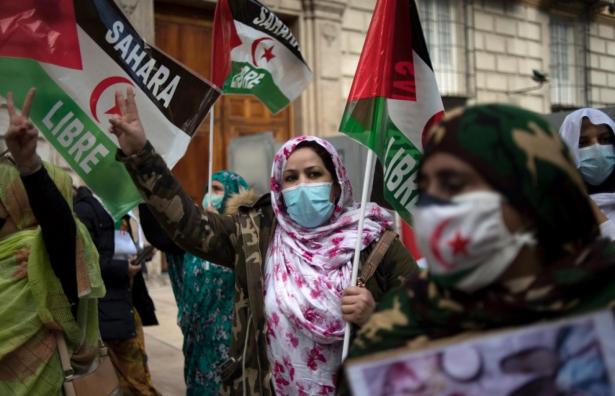 Supporters of the Sahrawi people's rights demonstrate in Malaga, Spain on November 28. On December 10, President Trump recognized Morocco’s illegal annexation of the Western Sahara in exchange for Morocco’s normalization of relations with Israel., Facebook photo

The Trump administration’s decision to recognize Moroccan control over Western Sahara in exchange for Moroccan normalization of relations with Israel marks a shameful day for America’s commitment to international law, human rights, and diplomacy.

With this decision, the United States becomes the only country in the world to recognize Morocco’s unilateral annexation of Western Sahara and further isolates itself on the international stage through its wanton disregard of the international norm of self-determination. Further, while Trump may claim this is an essential move toward peace in the Middle East, in fact this decision threatens to plunge an already volatile region deeper into crisis.

Located along the Atlantic Ocean and sandwiched between Mauritania and Morocco, Western Sahara is a former Spanish colony and current disputed territory. Roughly 70 percent of the territory is under de facto Moroccan control with the remaining 30 percent controlled by the Polisario, a local Sahrawi independence movement backed by Algeria and recognized by 39 other nations and the African Union as the Sahrawi Arab Democratic Republic.

Large-scale conflict between Morocco and the Polisario began in 1975 following Spain’s withdrawal from the region. After a ceasefire in 1991, a U.N. peacekeeping force, MINURSO, was established with a primary mandate to “organize and ensure a free and fair referendum” on independence for the territory. Yet to date, no referendum has been held, and more than 100,000 refugees remain in camps located in the southern Algerian desert, with an additional 20,000 in Mauritania.

The International Court of Justice, in a major advisory ruling, supported this right for a free and fair referendum on self-determination in Western Sahara. A multitude of subsequent U.N. General Assembly and Security Council resolutions reaffirmed the right to self-determination for the Sahrawi people.

As the United Nations notes at the start of each resolution on Western Sahara, there is an “inalienable right of all peoples to self-determination and independence.” The Trump administration’s decision to unilaterally disregard this international norm dangerously undermines international law and the ability of peoples around the world to determine their own political status.

This decision not only subverts the power and authority of international law, but it also flies in the face of the long-held U.S. policy in support of a just and lasting political solution between Morocco and the Polisario.

Washington has consistently held the position that Morocco and the Polisario must come together to determine a mutually acceptable political solution to put an end to their conflict. In fact, from 1997 to 2004, former U.S. Secretary of State James Baker served as the U.N. Secretary-General’s Personal Envoy to Western Sahara and consistently pushed for a referendum on independence. The decision by a lame-duck president to disregard this policy damages U.S. credibility by calling into question Washington’s commitment to other long-held American positions elsewhere in the world.

Trump’s pronouncement also threatens to upend regional peace and security at an extraordinarily volatile time. While President Trump crowed on Twitter that this decision was “a massive breakthrough for peace in the Middle East,” in reality it is the opposite.

This unilateral decision will fuel recently renewed fighting between Morocco and the Polisario, which last month led to the collapse of the 29-year ceasefire. At a time of rising tensions in the Maghreb, this is a decision that will likely have far-reaching consequences for stability in the region, deeply complicate U.S. relations with Algeria, and stifle any chance for the Sahrawis to determine their own political future.

Undermining international law, disregarding long-standing U.S. policy, and contributing to the risk of regional conflict just to add a veneer of legitimacy to the Abraham Accords is a deal not worth making. As one of his first moves as president, Joe Biden must walk back this rash decision to recognize Moroccan control of Western Sahara.

At the same time, the Biden administration should work to ensure that Morrocco remains a close and valued American ally. The issue here is the recognition of the importance of following international law and maintaining global norms. Regardless of whether the people of Western Sahara choose autonomy under Moroccan sovereignty or independence, the decision must remain theirs alone.

[Alexander Bertschi Wrigley is an Emerging Expert on security sector assistance in the Maghreb with the Forum on the Arms Trade and holds an MA in International Security with a focus on North Africa from Sciences Po Paris. He can be reached on twitter @BertschiWrigley.]