'Our Blood is Cheaper than Water': Anger in Iraq Over Trump Pardons 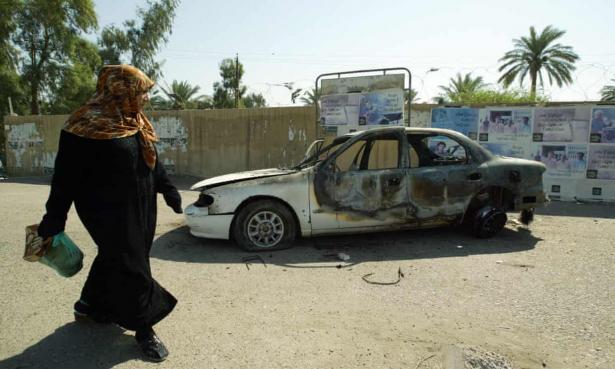 A burnt-out car at the site where Blackwater guards opened fire in western Baghdad on 16 September 2007., Photograph: Ali Yussef/AFP/Getty Images

Iraqis have reacted with outrage to Donald Trump’s move to pardon four security guards from the security firm Blackwater who were jailed for a 2007 massacre that sparked an outcry over the use of mercenaries in war.

The four men were part of a security convoy that fired on civilians at a central Baghdad roundabout, killing 14 people including a nine-year old child and wounding many more.

The four guards – Paul Slough, Evan Liberty, Dustin Heard and Nicholas Slatten – opened fire indiscriminately with machine guns, grenade launchers and a sniper on a crowd of unarmed people at a roundabout, known as Nisour Square.

The killings were one of the lowest points of the US-led invasion of Iraq, and many Iraqis saw the convictions as a rare occasion where US citizens had been held to account for atrocities committed during the aftermath. Baghdad residents who spoke to the Guardian described the outgoing US president’s announcement as a “cruel slap” and an insult.

Adil al-Khazali, whose father Ali was killed in the attack, said he was shocked by the news. “Justice doesn’t exist. I ask the American people to stand with us. I lost my father and many innocent women and children also died,” he told the Guardian.

“I ask the US government to reconsider, because by this decision US courts are losing their reputation. Trump has no right to pardon killers of innocent people.”

Dr Haidar al-Barzanji, an Iraqi researcher and academic, said “Trump has no right to decide on behalf of victims’ families to pardon these criminals. It is at odds with human rights and against the law. In Iraqi law they can only be pardoned if the families of victims pardon them. I encourage the families of the victims to request a complaint against Trump when the Biden administration starts.”

The Iraqi human rights activist Haidar Salman tweeted: “I still remember my professor of haematology at Baghdad University department of pathology (who was shot during the massacre along with his family) when he returned to life after his two children and his wife were killed in Nisour Square and almost lost his mind.

“One reason for him to survive was to condemn the murderers. The person who releases these criminals is more of a criminal. The Iraqi government should ask the Biden administration to revoke the pardon.”

The carnage at Nisour Square came more than four years into the US invasion, which sparked a vicious sectarian war and mass displacement of Iraqis. The long US occupation had left citizens resentful of security convoys that carved swathes through traffic at will, sometimes shooting towards cars that had trailed too closely.

Private security contractors, supporting logistics companies, or in some cases the US military, were a frequent source of complaints about heavy-handed and disrespectful behaviour towards locals.

“We used to be terrified of them, especially Blackwater, who were the nastiest of them all,” said Ribal Mansour, who heard the chaos at Nisour Square on 16 September 2007, and ran to the scene. “What I saw there will haunt me for ever. It should have been a red line. For them to be freed by the US commander-in-chief is shameful.”

Slough, Liberty and Heard were convicted on multiple charges of voluntary and attempted manslaughter in 2014, while Slatten, who was the first to start shooting, was convicted of first-degree murder. Slatten was sentenced to life and the others to 30 years in prison each.

A federal judge threw out an initial prosecution, but the then vice-president, Joe Biden, promised to pursue a fresh prosecution, which succeeded in 2015.

As the incoming president, Biden is certain to be lobbied heavily by Iraqi officials to reverse the decision. “It will be the first thing we discuss with him,” said an aide to Mustafa al-Kadhimi, the Iraqi prime minister.

At the sentencing hearing, the US attorney’s office said in a statement: “The sheer amount of unnecessary human loss and suffering attributable to the defendants’ criminal conduct on 16 September 2007 is staggering.”

After news of the pardon emerged on Tuesday night, Brian Heberlig, a lawyer for one of the four pardoned Blackwater defendants, said: “Paul Slough and his colleagues didn’t deserve to spend one minute in prison. I am overwhelmed with emotion at this fantastic news.”

The pardons are among several the president has granted to American service personnel and contractors accused or convicted of crimes against non-combatants and civilians in war zones. In November last year, he pardoned three US servicemen who had been accused or convicted of war crimes, including a former army lieutenant convicted of murder for ordering his men to fire at three unarmed Afghans.

During the trial of the Blackwater contractors, defence lawyers argued their clients returned fire after being ambushed by Iraqi insurgents.

But in a memorandum filed after sentencing, the US government said: “None of the victims was an insurgent, or posed any threat to the Raven 23 convoy.”

The memorandum also contained quotations from relatives of the dead, including Mohammad Kinani, whose nine-year-old son Ali was killed. “That day changed my life for ever. That day destroyed me completely,” Kinani said.

FBI investigators who visited the scene in the following days described it as the “My Lai massacre of Iraq” – a reference to the infamous slaughter of civilian villagers by US troops during the Vietnam war for which only one soldier was convicted.

The Iraqi government announced an immediate ban on Blackwater following the killings – though it continued to operate in the country until 2009 – and the state department ultimately stopped using the firm to provide diplomatic security.

The massacre led to successive investigations into Blackwater and the wider private contractor industry by the US state department, the Pentagon, Congress and the UN.

Amid intense scrutiny, founder Erik Prince cut ties with the company in 2010, though he continued to work in the field, setting up an American-led mercenary army in the UAE that has since reportedly been deployed in Yemen.

Blackwater’s latest incarnation, Academi, is owned by private investors and continued after Prince’s departure to win state department and Pentagon contracts to protect US installations in war zones and train armed forces personnel.

All but one of the victims’ families accepted compensation payments from Blackwater: $50,000 for the wounded, and $100,000 for relatives of the dead.

Haitham al-Rubaie – who lost his wife, Mahassin, a doctor, and his son Ahmad, a 20-year-old medical student – was the only one to turn down the offer.

A former classmate of Ahmad said that Trump’s pardon was not surprising for Iraqis.

“The Americans have never approached us Iraqis as equals,” she told AFP. “As far as they are concerned, our blood is cheaper than water and our demands for justice and accountability are merely a nuisance.”