The news is filled with “uplifting” human interest tales of workers walking six miles and nurses scrounging up sick leave. Injustice is so normalized that stories that should be enraging indictments of the system pass for heartwarming vignettes. 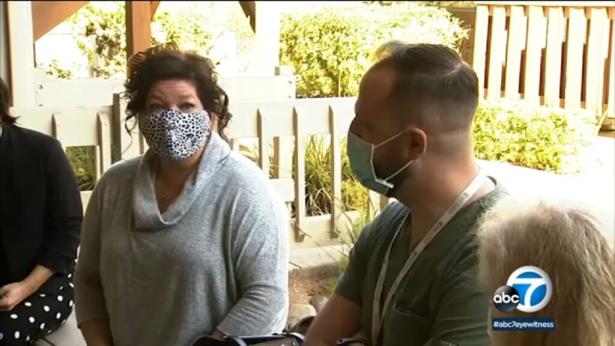 A nurse in Los Angeles talks to an ABC news reporter. Having recently been diagnosed with leukemia, she is understandably grateful for her coworkers sick time donations. But is this a hopeful story?, ABC7eyewitnessnews/screen shot

This week, ABC7 Eyewitness News Los Angeles ran what it called a “heartwarming” story: after a nurse working for a company called Impact Health Care was diagnosed with leukemia, her coworkers donated their sick daysand personal time off to her so she could take time away from work for her treatment. ABC7 quoted the nurse saying she felt lucky to have such kind coworkers, who would step up for her in her time of need. The article praised nurses for being courageous and important to society.

ABC7 Eyewitness News Los Angeles, and its reporter Sid Garcia, must exist in a different moral universe from me, because when I read the above facts, the word that comes to mind is not “heartwarming.” It is “outrageous.” The nurse in the story was sick with leukemia. Why did she need her coworkers’ sick days? Well, because Impact Health Care clearly didn’t want to keep paying her during the time she couldn’t work, meaning that if she took all the time she needed for her leukemia treatment, the company would have fired her. That’s not a heartwarming story, that’s the story of someone being threatened with losing their livelihood because they have cancer. That’s a story of somebody being cruelly mistreated by an institution. Of course, it’s reassuring to see that her coworkers are human beings, and are willing to make personal sacrifices to help a colleague with cancer when the company won’t give her what she needs. Humans are generally like that, and the story does show the traits that are best about people. But this should be framed as the story of an injustice. Readers should not just be coming away with their cockles warmed, but with fire in their belly about the fact that in the United States, a nurse with leukemia can’t even get sufficient sick time for her treatment.

The disturbing thing here is that injustice is so normalized in this country that what should be enraging can pass for heartwarming. But it happens constantly. This kind of “uplifting” human interest story is in the news constantly. There was the 89-year-old pizza delivery man who got a $12,000 tip—he “works 30 hours a week to make some extra money because his monthly bills cost more than his social security covers,” and someone was disturbed enough by it to raise some money for him. Just a few days ago, CNN published the story of a high school that had established a “grocery store” where students could get basic supplies, like food and toilet paper, for their families, with store credit being given out on a merit system. We frequently read stories of friends, parents, coworkers, and neighbors banding together to buy a teacher school supplies, or help a kid who can’t afford a wheelchair get one. The focus is on the initiative shown by the helpers. But the reporters’ framing misses the crucial question: why were things like this in the first place? Why was the wheelchair unaffordable? Why aren’t school supplies supplied by schools? Why is access to toilet paper conditional on school performance? Samantha Grasso, in an excellent analysis of “feel good” stories from last year, calls them a “rose-colored coverup of public resource failures,” citing a number of different prominent examples:

Last year, a young boy sold his Xbox to a stranger online to buy a car for his single mom to drive herself to work (“Good kid. Sad story,” someone responded). A few weeks ago, an elementary school student gave his teacher his birthday money because he heard about how underpaid teachers are. Last year, a stranger donated supplies to six random teachers after one of them posted her salary on Facebook. The internet has hosted a myriad of stories depicting people whose bosses or coworkers or customers gave them cars to get to their jobs, after walking 20 miles overnight to their first day, or 12 miles to work roundtrip, or walking to work every day for a year.

In each case, the problem is the same. We are zeroing in on the human response to unjust conditions, when an equally important job of journalists is to expose the causes of those conditions. Framing matters just as much as facts, and you can frame the same information as either an indictment of corporate profit-seeking or a celebration of mutual aid. If you make it the latter rather than the former, viewers will not be left with the right questions in their mind. They will think their dystopian surroundings are normal, that this is how things are, that we just have to give each other our sick days when we get sick. The possibility of an employer actually treating an employee well is excluded from the discourse, just as the possibility of everyone who needs medical care getting it for free (which happens in other countries) is off the radar.

Cody Johnston, in an excellent Some More News video breaking down these kinds of “inspirational” stories, calls them “a symptom of a sick society that is unable and unwilling to care for its own citizens.” While “at first glance” they may seem harmless tales of “neighbors helping each other out or overcoming strife through hard work and determination” they perniciously normalize the profoundly wrong. Some of them, Johnston notes, are simply corporate propaganda, such as KFC making a show of buying a car for an employee who was walking to work six miles every day because she couldn’t afford a car. The story makes KFC look good and generous, but KFC should be the villain of the story. If the woman couldn’t afford to get to work based on what KFC was paying her, then they were not paying her a living wage. The job of a responsible news organization would be to find out how many workers were struggling to afford transit costs and shame the corporations that give money to shareholders that they should be giving to their workers.

There is no such thing as journalistic objectivity, because one has to make choices about how to present things, and those choices are based on implicit values. Do we focus on what KFC did do for one employee, or what it didn’t do for others? Samantha Grasso, in her analysis, encourages journalists to be more self-critical and start thinking about what their stories say and whose interests they serve, which questions they ask and which they don’t. Grasso is hopeful that the age of the “dystopian feel-good” story might be ending, but the fact is that these stories are still coming out. (Do send Current Affairs any particularly horrifying examples you find.) News organizations like ABC7 and reporters like Garcia also need to be shamed over their failure to apply basic moral judgment in their work. ABC7 appears to have deleted its tweet calling the sick day story “heartwarming,” which suggests that public revulsion may be able to influence news organizations in their choices of presentation. But we don’t just need to get them to use more tasteful language. We need to get them to focus on the true villains and put the right questions in the minds of their readers and viewers. People need to come away angry, but also with raised expectations for what they and their fellow humans deserve. We should all be in awe of the human capacity to share our last crumbs with one another, but we should also demand that in an age of abundant wealth everyone has guaranteed healthcare, housing, food, and leisure time.  My own heart will be warmed when I see people’s basic human rights being granted. Until then, this stuff should only churn our stomachs.

[Nathan J. Robinson is Editor-in-Chief of Current Affairs magazine, which he founded in 2015. If you enjoyed this article, please consider subscribing to our magnificent print edition or making a donation. Current Affairs is 100% reader-supported.]