Wednesday’s victory is the result of five years of mass protest marches by Argentina’s grassroots women’s movement, which began as a Twitter campaign against gender violence. 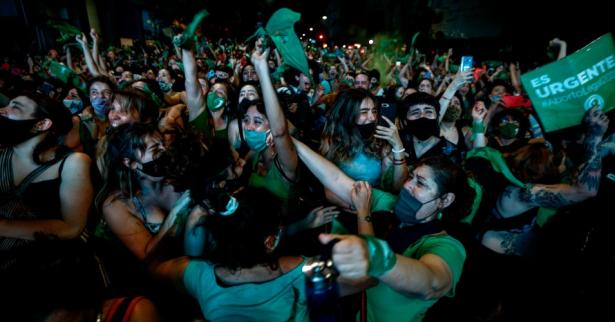 Argentina has become the largest Latin American country to legalize abortion after its senate approved the historic law change by 38 votes in favour to 29 against, with one abstention.

Elated pro-choice campaigners who had been keeping vigil outside Buenos Aires’s neoclassical congressional palace erupted in celebration as the result was announced at just after 4am on Wednesday.

Women screamed with delight, sweeping their friends into tight hugs and jumping in ecstasy. Many wept tears of joy. Victory music kicked in and green smoke filled the air. A triumphant message flashed up on a big screen above the joyful crowd: “We did it!” it said. “ES LEY!” (IT’S LAW!).

“I’m very emotional,” said 25-year-old Melany Marcati, who was among the celebrators. “There are no words to describe what your body feels after fighting for something for so long. I cried a lot, which I wasn’t expecting.”

The campaigner Ingrid Beck said: “The struggle for women’s rights is always arduous, and this time we even had to contend with a pandemic, so I am overjoyed with this result.”

The bill, which legalises terminations in the first 14 weeks of pregnancy, was approved by Argentina’s lower house earlier this month after being put to congress by the country’s leftwing president, Alberto Fernández.

“Safe, legal and free abortion is now law … Today we are a better society,” Fernández celebrated on Twitter after the result was confirmed.

Fernández has previously said that more than 3,000 women had died as a result of unsafe, underground abortions in Argentina since the return of democracy in 1983.

The landmark decision means Argentina becomes only the third South American country to permit elective abortions, alongside Uruguay, which decriminalised the practice in 2012, and Guyana, where it has been legal since 1995.

Cuba legalised the practice in 1965 while Mexico City and the Mexican state of Oaxaca also allow terminations.

Giselle Carino, an Argentinian feminist activist, said she believed the achievement in the home country of Pope Francis would reverberate across a region that is home to powerful Catholic and evangelical churches and some of the harshest abortion laws in the world. 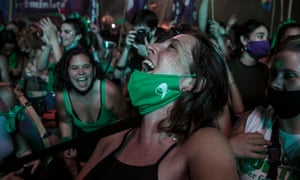 In most countries, such as Brazil, abortions are only permitted in extremely limited circumstances such as rape or risk to the mother’s life, while in some, such as the Dominican Republic and El Salvador, they are banned altogether.

“I feel incredibly proud of what we’ve been able to achieve. This is a historic moment for the country, without a doubt,” said Carino, head of the International Planned Parenthood Federation, Western Hemisphere Region.

“It shows how, in spite of all the obstacles, change and progress are possible. Argentinian women and what’s happening right now will have an enormous impact on the region and the world,” Carino added, pointing to parallel struggles in Brazil, Chile and Colombia.

Colombian activists recently petitioned the constitutional court to remove abortion from the country’s criminal code while campaigners in Chile hope a new constitution might lead to expanded women’s rights.

In the region’s most populous nation, Brazil, activists are waiting for the supreme court to rule on a 2018 legal challenge that would decriminalise abortion in the first weeks of pregnancy.

Mariela Belski, Amnesty International’s executive director in Argentina, called the result “an inspiration to the Americas”.

“Argentina has sent a strong message of hope to our entire continent: that we can change course against the criminalisation of abortion and against clandestine abortions, which pose serious risks to the health and lives of millions of people.” 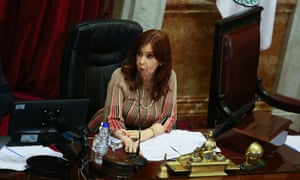 Wednesday’s victory is the result of five years of mass protest marches by Argentina’s grassroots women’s movement, which began as a Twitter campaign against gender violence that used the hashtag #NiUnaMenos (“Not one less” – meaning no more women lost to gender violence).

The first spontaneous march came on 3 June 2015, in reaction to the murder of 14-year-old Chiara Páez, who was found buried underneath her boyfriend’s house after being beaten to death and a few months pregnant.

“Aren’t we going to raise our voices? THEY ARE KILLING US,” the radio journalist Marcela Ojeda tweeted at the time. After that call to arms, a group of female journalists began tweeting under the #NiUnaMenos hashtag, resulting in the first of many marches that brought tens of thousands of women to gather at the congressional square in Buenos Aires.

The following year, Argentinian feminists held a mass strike in response to the rape, murder and impalement of 16-year-old Lucía Pérez in the coastal city of Mar del Plata.

It was after the 2015 #NiUnaMenos march that pro-choice campaigners realised the fight against “femicide” could also encompass demands for access to legal abortion.

They adopted a green scarf – worn as a bandana, head-scarf, or around the wrist – as a symbol of their movement, a trend that quickly spread to other Latin American countries, where green has come to symbolise the broader fight for women’s rights.

That green scarf was an allusion to the Mothers of Plaza de Mayo activists who wore white headscarves as they confronted Argentina’s vicious 1976-83 dictatorship over the disappearance of their children.

Pro-choice campaigners initially saw their hopes of change dashed in August 2018 when the senate, under pressure from the Catholic church, rejected a similar bill.

Fernández’s election the following year brought fresh hope, as he promised to back the push for change. “The criminalisation of abortion has achieved nothing,” he said in November after putting the legislation to congress.

Speaking outside congress on Wednesday, 46-year-old Julieta Cabrera said: “Until the last moment I didn’t want to believe it, not until the last vote was in, because last time, we got our hopes up.” She said she had come out because “abortion is something I’ve experienced firsthand. My generation and many others have been through it.”

Opponents of the law, who had gathered nearby by a giant model foetus that is their trademark, dispersed quickly after the result emerged, with one man occasionally shouting the word “Murderers!” towards the pro-choice side.

Karina Marolla, a 49-year-old opponent of the law, said: “What was voted for today is the death penalty for the most innocent. Today in Argentina there’s no law giving the death penalty to rapists or murderers. So we’re feeling sad, to put it lightly.” 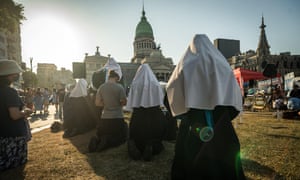 Carino said the leftward political shift that brought Fernández to power had undoubtedly boosted the pro-choice campaign after the previous year’s setback. Among those who helped Fernández win office were many young women who took part in the #NiUnaMenos protests and were voting for the first time.

Carino said the real credit lay with Argentina’s indefatigable women “who never stopped occupying the streets and the social networks – not even against the backdrop of the pandemic – and kept up their struggle, without haste but without rest”.

“If anything made the difference, it was this.”