"Let's Vote Her Out," Says Warnock After Loeffler Vows on Eve of Runoffs to Object to Biden Electoral College Win

"Let's show her that Georgia voters will not be silenced or ignored." 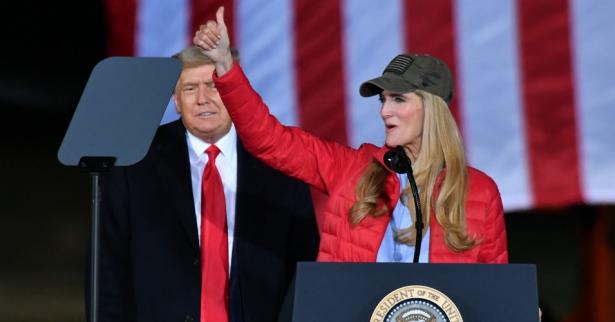 Sen. Kelly Loeffler (R-Ga.) speaks as she is flanked by lame-duck President Donald Trump during the Victory Rally by the Republican National Committee in Dalton, Georgia, United States on January 4, 2021. , Peter Zay/Anadolu Agency via Getty Images

At a campaign rally with lame-duck President Donald Trump just hours before Georgians were set to head to the polls for the pivotal U.S. Senate runoffs, incumbent Republican Sen. Kelly Loeffler vowed late Monday to object when Congress meets this week to certify President-elect Joe Biden's Electoral College victory, joining a last-ditch mass disenfranchisement effort by the GOP that is doomed to fail.

While the Dalton, Georgia rally was intended to boost Republican enthusiasm for the Tuesday runoffs, Trump and Loeffler spent much of their time on stage railing against the integrity of the November presidential election, with the outgoing president rehashing his now-familiar and false claims of widespread voter fraud and defending his possibly criminal call with Georgia Secretary of State Brad Raffensperger.

"Everyone liked my phone call," the outgoing president said.

Trump didn't mention the Covid-19 pandemic during his 90-minute speech, which came as the U.S. reported 2,800 new coronavirus-related hospitalizations Monday, bringing the total number of people currently hospitalized to a record 128,000.

Loeffler, for her part, opened her brief remarks with an announcement that was met with enthusiastic applause: "On January 6th, I will object to the Electoral College vote. That's right, that's right. Thank you. We're gonna get this done!"

Democratic Senate candidate Rev. Raphael Warnock, Loeffler's opponent, immediately seized upon the appointed Georgia Republican's vow as further proof of her disregard for the will of the state's voters, who chose Biden by a narrow margin in November.

"Unelected Senator Kelly Loeffler wants to undermine your vote and overturn Georgia's election," Warnock tweeted late Monday. "Let's show her that Georgia voters will not be silenced or ignored. Tomorrow, let's vote her out."

Because his Senate term ended on January 3 with the beginning of the new Congress, David Perdue—who is facing off against Democrat Jon Ossoff on Tuesday—will not be able to vote for or against the certification of Biden's decisive victory when Congress meets Wednesday.

But during a recorded video speech played at Monday's rally in Dalton, Perdue joined Loeffler in attacking the November election results. "If you're as mad as I am about November, then rise up with us and fight," said Perdue, who is quarantining after being exposed to the coronavirus last week. "Fight by doing the only thing you can do right now, and that is to vote tomorrow."

"If we don't all get out and vote tomorrow," Perdue added, "everything President Trump has done to make America great again is gone."

As The Nation's John Nichols noted in a column last month, both Loeffler and Perdue "endorsed a bizarre legal scheme by Texas Attorney General Ken Paxton to overturn the results from four battleground states that played a pivotal role in deciding the 2020 election for President-elect Joe Biden: Michigan, Pennsylvania, Wisconsin, and Georgia." The Texas lawsuit was ultimately rejected by the U.S. Supreme Court.

"That's right," Nichols wrote, "Loeffler, an appointed senator seeking to win a January 5 special-election runoff, and Perdue, an incumbent seeking to win a second term in a regular runoff on the same day, proposed to disenfranchise their constituents, all five million Georgians who voted for a presidential candidate in the November 3 election—the 2,475,141 who backed Biden and 2,462,857 who backed Trump, the roughly 62,000 who voted for Libertarian Jo Jorgensen and everyone who cast a write-in ballot for the Greens or another party or Mickey Mouse."

"Unfortunately," Nichols added, "courtroom failures have not dimmed Loeffler and Perdue's determination to diminish, dismantle, and, if necessary, overturn democracy."

A record-shattering three million Georgians cast their ballots before early voting for the two runoffs ended last week, turnout that—according to the Atlanta Journal-Constitution—appeared to favor the Democratic candidates. If Democrats win both runoff contests, the party will effectively take control of the Senate, stripping Senate Majority Leader Mitch McConnell (R-Ky.) of much of his power to stonewall much-needed coronavirus relief.

"We can pass $2,000 relief checks for the people, but we have to win this Senate election," Ossoff tweeted late Monday, echoing a message Biden delivered during an Atlanta rally earlier in the day.

"If you send Sens. Perdue and Loeffler back to Washington, those checks will never get there. It's just that simple," said the president-elect. "The power is literally in your hands."