The Capitol Riot Reveals the Dangers From the Enemy Within

The belief that America previously had a well-functioning democracy is an illusion. The riot by supporters of President Trump, aimed at preventing the counting of electoral votes, reveals a darker side of the history of American democracy. 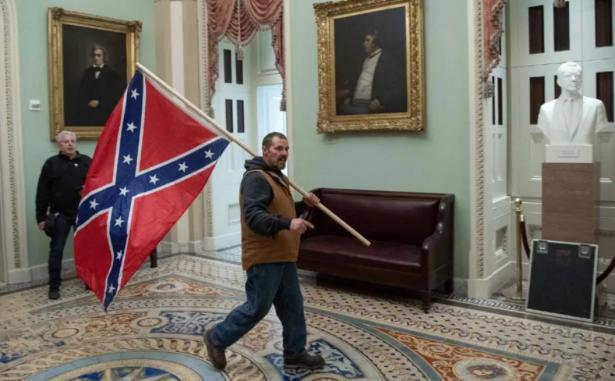 Supporters of US President Donald Trump protest in the US Capitol Rotunda on January 6, 2021, in Washington, D.C., Saul Loeb / AFP via Getty Images // The Nation

will long be remembered as the day two strands of the American experience, both deeply embedded in our national history, collided. One was reflected in the election of African American and Jewish senators from Georgia. This is a state that witnessed the 1915 lynching of the Jewish factory superintendent Leo Frank, the transformation of Tom Watson from a populist who sought to unite poor Black and white farmers into a vicious racist and anti-Semite, and the Atlanta Massacre of 1906, in which white mobs killed perhaps two dozen African Americans, not to mention the premiere in 1939 of the film Gone With the Wind, a paean to the Ku Klux Klan. The election results are the culmination of a mass, interracial movement to transform a state that long denied its Black population the right to vote into a genuine democracy. The campaign led by Stacey Abrams and others to register new voters is an inspiring example of the possibility of progressive change.

Yet the riot by supporters of President Trump, aimed at preventing the counting of electoral votes, reveals a darker side of the history of American democracy. One can begin with the fact that, more than two centuries since the adoption of the Constitution, we still select the president through the Electoral College, an archaic system that reflects the founders’ conviction that ordinary people are not to be trusted with voting directly for president, and their desire to bolster the slaveholding South, whose political power was augmented by the three-fifths clause that gave slave states extra electoral votes based on their disenfranchised Black population. Indeed, Trump occupies the White House only because an undemocratic electoral system makes it possible to lose the popular vote and still become president. Moreover, efforts to restrict the right to vote by race, gender, or some other criteria have a long history. The idea that the people should choose their rulers, the essence of democracy, has always coexisted with the conviction that too many people—of the wrong kind—are casting ballots. Georgia’s requirement that office seekers receive over 50 percent of the vote or face a runoff election, enacted in 1963 at the height of the civil rights revolution, was intended to prevent the victory of a candidate preferred by Blacks if several aspirants split the white vote.

The events of January 6 are the logical culmination of the disrespect for the rule of law nurtured by the Trump presidency, evidenced in the glorification of armed neo-fascist groups, most notoriously until now at Charlottesville; the whipping up of anti-mask and anti-lockdown riots in Michigan and other states; and the refusal to accept the clear results of the presidential election. But those familiar with American history know that the Capitol riot was hardly the first effort to overturn extralegally the results of a democratic election. The Reconstruction era and the years that followed witnessed many such events, some far more violent than the January 6 riot. Scores of members of a Black militia unit were murdered in 1873 in Colfax, La., by armed whites who seized control of the local government from elected Black officials. An uprising the following year by the White League sought to overthrow the biracial Reconstruction government of Louisiana. (A monument to this effort to restore white supremacy stood for decades in New Orleans until removed in 2017 by Mayor Mitch Landrieu.) In 1898, a coup by armed whites in Wilmington, N.C., ousted the elected biracial local government. By the early 20th century, Black voting and office holding had essentially ended throughout the South. This is not just ancient history. As recently as 2013, the Supreme Court eviscerated key provisions of the Voting Rights Act, opening the door to widespread efforts in Republican-controlled states to suppress the ability to vote. Let’s not assume that until the Capitol riot the United States was a well-functioning democracy.

Alexander H. Stephens, the Georgia political leader who served as vice president of the Confederacy, famously described the effort to create a slaveholders’ republic as an embodiment of the “great truth that the Negro is not equal to the white man, that slavery…is his natural and normal condition.” January 6 may be the first time the Confederate flag was openly displayed in the Capitol building—a shocking sight that, I hope, will never be repeated. But in his opposition to the removal of monuments to Confederate leaders and to renaming military bases on the grounds that they erase “our” history, Trump has consciously identified his presidency with the Confederacy and the white nationalism at its core.

Today, the United States spends far more on its military than any other nation. Yet the mob that stormed the Capitol consisted not of Chinese, Iranians, Russians, or other purported enemies of American democracy but of our fellow citizens. Nearly two centuries ago, in his famous Lyceum speech, Abraham Lincoln condemned growing disrespect for the rule of law as the greatest danger to American democracy. “If destruction be our lot,” he declared, “we must ourselves be its author and finisher.” The results in Georgia and Trump’s imminent departure from the presidency offer hope for a revitalization of a democratic political culture. But now, as in Lincoln’s time, the danger to American democracy ultimately lies within.

[Eric Foner, a member of The Nation’s editorial board and the DeWitt Clinton Professor Emeritus of History at Columbia University, is the author, most recently, of The Second Founding: How the Civil War and Reconstruction Remade the Constitution.]