The Philippines has long relied on the remittances of its more than 2 million Overseas Filipino Workers (OFWs), without concerning itself with their reintegration. Now COVID-19 has exposed the deep-seated cracks in its labor export-based economy. 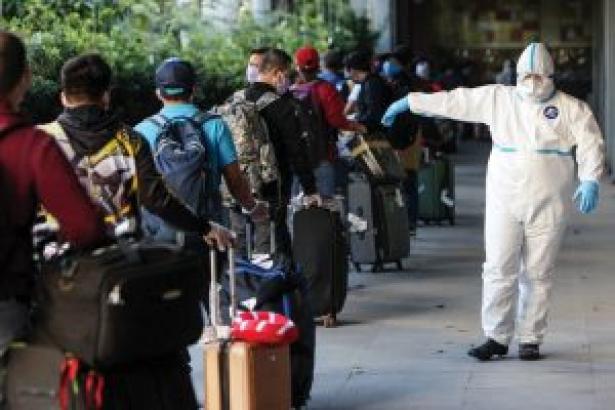 Filipino healthcare workers have found themselves thrust to the frontlines of the pandemic to care for the most vulnerable across the globe. The Philippines is one of the world’s leading labor-sending countries, facilitating the migration of an estimated 2.2 million overseas Filipino workers (OFWs) during the period April to September 2019. OFWs are often valorized as ‘bagong bayani’ (modern-day heroes) for sustaining the national economy with their remittances, which reached an all-time high of US$33.5 billion in 2019. However, while promoting labor export as a development strategy, the government has long overlooked the reintegration of migrant workers. The COVID-19 pandemic has revealed major gaps in protection for returnees, particularly in times of crisis.

As of October 2020, over 230,000 OFWs have been repatriated since the pandemic began, representing about one-tenth of workers overseas. Yet, Labor Secretary Silvestre Bello III revealed that there are still 13,000 OFWs waiting to be repatriated, while 70,647 remain stranded overseas predominantly across West Asia. Alarmingly, the Department of Foreign Affairs recently warned of depleting funds to sustain its efforts in repatriating OFWs and assisting distressed returnees.

Repatriated OFWs face further hardship upon returning to the Philippines. The post-arrival phase, involving returnees undergoing mandatory 14-day quarantine before being transported to their home communities, has highlighted the country’s weak repatriation procedures and limited testing capacity. Delays in testing and medical clearances have left quarantine facilities overcrowded, with returnees complaining of poor lodging conditions and misconduct by government officers and personnel.

Once they are cleared to leave quarantine, a lack of coordination and conflict between national agencies and local government units has caused further delays and distress with some units banning the return of OFWs for fear that they might be carriers of COVID-19. This only serves to stigmatize returnees and increase their risk of infection. At one point, thousands of locally stranded OFWs were crammed into a baseball stadium in Manila while waiting to be transported back to their home provinces.

"The pandemic has caused the unemployment rate to spike to 17.7%, more than triple the rate recorded in 2019"

Alongside immediate repatriation pressures, the Philippine government is grappling with the daunting challenge of supporting millions of newly unemployed Filipinos and migrant families dependent on lost remittances. The latest National Migration Survey reports that approximately 12% of Filipino households have a member who is or has been an OFW. Therefore, such families will be the hardest hit financially by the loss of income, which may be enough to pull families below the poverty line. The pandemic has caused the unemployment rate to spike to 17.7%, more than triple the rate recorded in 2019.

To buffer the economic impact, the government initially allocated US$52 million for displaced OFWs, including a one-time emergency cash aid of US$200 for each worker displaced by the pandemic under the Abot Kamay ang Pagtulong programme. The Overseas Workers Welfare Administration also launched its project EASE, which provides educational assistance worth US$8 million for college-level dependents of OFWs affected by COVID-19. In August, the government signed into law the Bayanihan to Recover as One Act, providing a recovery package worth US$3.5 billion. Of this, US$17 million is for the repatriation of OFWs, medical assistance, and shipment of remains for those who die of COVID-19.

While such cash assistance is helpful as a stop-gap measure, the government’s COVID-19 recovery package for OFWs is insufficient to contain the socio-economic impact of the crisis long-term. Similarly, job creation schemes such as the Development Outreach for Labor, Livelihood and Advancement of Resources programme offering 70,000 jobs to repatriated OFWs and the Build, Build, Build programme creating jobs in the construction sector, fail to meet the overwhelming demand of unemployed Filipinos across the country.

The time for the government to scale-up and strengthen its preexisting economic and social reintegration programmes is long overdue. Providing OFWs with sustainable and appropriate local employment opportunities will require a government mechanism to systematically collect detailed data on returnees. Such data will help to inform strategies and formulate programmes that match the different circumstances, individual needs and skillsets of returnees.

It is crucial that government agencies share this data at the national level, along with local government units and civil society organisations to develop a coordinated action plan. The use of digital technology, including social media platforms, to communicate with and disseminate information to repatriated migrant workers is also proving key in extending the government’s reach.

The Philippines’ return and reintegration policies have long been the weakest component of its labor migration governance, which stems in large part from the state’s greater focus on institutionalizing a comprehensive system of labor export. The pandemic has exposed deep-seated cracks in its export-based and remittance-dependent economy. The Philippine government is finally being forced to reevaluate its policy agenda and confront neglected reforms, by investing in the creation of decent local jobs and developing reintegration programmes that tailor to the needs of returning Filipino migrant workers.