The Invest in Our New York Campaign, involving more than 100 groups, is urging legislators to take action amid the COVID-19-induced recession. 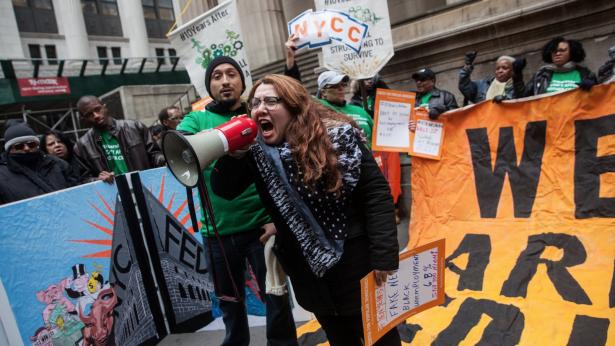 Maria Rubio, member of Make the Road New York, speaks at a 2018 protest in New York. , (Photo by Holly Pickett via Creative Commons)

New York needs cash, and the state’s progressives say they know where to find it.

On January 6, many of the major progressive organizations in New York City, including the Working Families Party, the Democratic Socialists of America, and Make the Road New York launched the Invest in Our New York campaign, a coalition of more than 100 groups that aims to persuade lawmakers to pass laws raising $50 billion in new revenue in 2021.

This money is needed, they say, because of the hit to the state’s finances caused by the COVID-19-induced recession. New York State faces an estimated $60 billion shortfall over the next four years.

“The way the governor has been handling the economic situation in the state is to cut budgets, and that impacts working class, middle class, poor, and Black and brown New Yorkers the most,” Rebecca Bailin, the campaign manager of Invest in Our New York, tells The Progressive. “And all of the main base-building and progressive organizations in New York have finally come together to say ‘enough is enough.’ ”

The campaign’s report calls for the $50 billion to be raised through a combination of new taxes on income, wealth, stock trades, and corporations. Notably, the report doesn’t say what the new revenues should be used for specifically.

Sochie Nnaemeka, director of the New York Working Families Party, tells The Progressive that this was done to keep the coalition as broad as possible.

The new revenue “should go to a whole host of things,” Nnaemeka says, “but we’re coming as a united front, not pitting education against transit against climate, but saying, ‘We need investment in our communities in real time, sustainable, long-term investment that actually funds the public good.’ ”

Many lawmakers from around the state have already announced their support of the campaign, with legislators from both New York City and upstate pledging to fight for the Invest in Our New York agenda in the 2021 legislative session.

But for legislators who haven’t yet jumped on the wagon, the campaign is counting on a mass mobilization of New Yorkers to reach out to their representatives and convince them to support the cause.

Make the Road New York, Housing Justice for All, and the Democratic Socialists of America have already called tens of thousands of New Yorkers to tell them about the campaign and urge them to ask their representatives to support it. They plan to escalate that outreach in the coming months.

“We want more and more New Yorkers to have a strong politicized relationship to the budgeting process than currently do,” says Jack Gross, an organizer with the Democratic Socialists of America.

Organizers say that in addition to changing the minds of recalcitrant legislators, mobilizing constituents as well will motivate fence-sitting legislators to support the Invest in Our New York agenda.

“There are some people who are going to feel the heat on this, but there are some people that are going to be thankful and are going to see an opportunity to buck legislative leadership, and buck the governor,” says Michael Whitesides, an organizer with the Democratic Socialists of America. “It’s easier to take a bold stance when you have the numbers to back up [saying] ‘My constituents are calling for this.’ ”

While winning won’t be easy, the coalition’s work will be aided by the historic number of progressives and socialists elected to the New York State Legislature in 2020.

Newly sworn in State Senator Jabari Brisport, Democrat of Brooklyn, who was endorsed by the Working Families Party and the Democratic Socialists of America, plans to make an aggressive push for the campaign’s agenda. Over the next few months, he tells The Progressive, he plans on “pushing back against tax proposals that I think are too weak and don’t raise enough revenue for what we actually need in New York.”

Brisport ran on a progressive platform that included universal health care for New York and greater investment in affordable housing, but says that this year, everything else will have to take a back seat. “This ended up superseding everything I ran on, because the policies I was fighting for need to be funded, and it’s not going to happen unless we drastically increase revenue,” he says.

Would the coalition settle for half the pie? When asked if compromise is on the table, Bailin sounds a defiant note. “The need is so great,” she says “We will keep fighting until we win. And the sources [of funding] must be progressive.”

Of course, New York can only tax individuals who live in the state. What if the rich pack up and leave? Would these new taxes trigger a round of capital flight, with New York’s wealthy decamping for low-taxation states like Florida?

Governor Cuomo thinks so, saying last summer that if the state passes new taxes on the wealthy, “they’ll just move next door where the tax treatment is simpler.”

But Invest in Our New York members reject that claim. “Billionaire tax flight is a long standing rightwing myth that does not have any empirical evidence,” Nnaemeka says.

Cristobal Young, a Cornell sociologist who studies the migration habits of the wealthy, agrees. “Millionaire tax flight is a small fraction of a small fraction. It is essentially irrelevant to tax policy considerations,” Young tells The Progressive in an email.

Rather than the wealthy fleeing, Nnaemeka says that the real issue is that austerity and cuts to social programs are making New York City financially unlivable for the middle and working classes.

“Working people are going to Pennsylvania or Florida or the Poconos, going to places where they have a greater shot at making it through this pandemic,” she says. “We have to decide, as a state, do we want to prioritize empty apartments in skyscrapers, or do we want to invest in those who are taking care of us in this moment?”

Sam Mellins is a journalist living in New York City. His reporting focuses on electoral politics, labor, and criminal justice. His writing has appeared in The Appeal, Jacobin, THE CITY, City & State, and New York Focus.