Trump as Citizen Kane, and the challenge to the Left to prove to workers that it, not right-wing populists, truly represents them and will fight neoliberalism 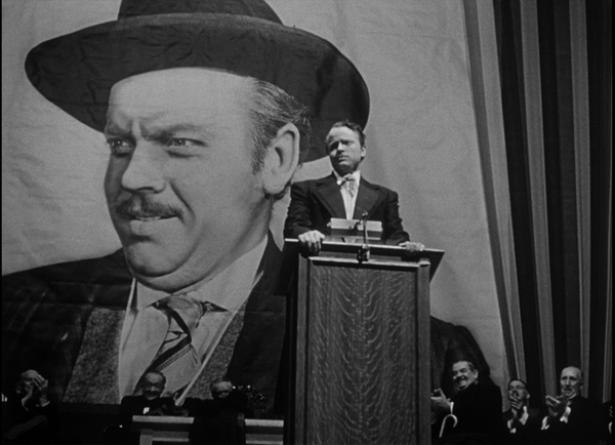 Watching the recent film Mank about the 1941 classic Citizen Kane and the writing of its script by Herman J. Mankiewicz and Orson Welles got me in a mood. Having seen Citizen Kane many times, I bought a book that included a copy of the script. As I read it, I was struck by how much Charles Foster Kane there is in Donald Trump.

“You don’t love anybody!” Kane’s paramour-turned-second wife Susan Alexander tells him.  “Me or anybody else! You want to be loved—that’s all you want! I’m Charles Foster Kane. Whatever you want—just name it and it’s yours! Only love me! Don’t expect me to love you—“

Psychoanalyzing Trump is beyond the scope of this column, but like most demagogues he revels in the cheers and applause he gets from his people at rallies. He talks of how he “loves” them and would do anything for them. As seen in the recent takeover attempt of the U.S. Capitol by thousands of Trumpsters, what he truly demands is that they will do anything for him.

Still, Trump’s appeal has always reached far beyond what the naysayers at CNN, MSNBC, NBC, the New York Times, and the Democratic National Committee claim. Sure, many of his followers are racist, narrow-minded Neanderthals. Others, however, found in him—however falsely—a voice in the wilderness left by the neoliberal Democratic and Republican parties, beyond the rhetoric of austerity and the utter obeisance to Wall Street and global capitalism.

Trump promised them jobs in 2016. He promised to stop the bleeding of U.S. manufacturing into the cheap-jobs world that is Mexico, China, and Vietnam. His speeches bristled with their same contempt for the elitists on either side of the flyover zone who told blue-collar workers to take computer classes and who made empty promises how that would redefine their lives.

And those workers—many of them in former union strongholds like Michigan and Wisconsin—voted for him. They sure weren’t going to vote for Hillary Clinton, the elitist war-mongering neoliberal who didn’t even deign to campaign in those places.

Of course, Trump never delivered on those promises. The be-all and end-all of Donald Trump is the rich huckster born with a silver spoon in his mouth, trained at the feet of Joe McCarthy’s lawyer, Roy Cohn, and thus providing a link between two of the most fascistic eras in American history. Trump did everything he could over the last four years to undermine worker rights and protections, including the complete neutering of the National Labor Relations Board.

“Remember the working man?” Susan asks the once-raging populist Kane at one point in Citizen Kane. “You used to defend him quite a good deal. Well,--he’s turning into something called organized labor and you don’t like that at all.”

Workers’ dilemma in the United States is a reflection of the same dilemma around the neoliberal world, a world in which global finance has triumphed, co-opting left-leaning as well as traditional conversative parties, undermining labor unions and workers’ rights, and sending Marxists and much of the hard-core Left into an ideological spiral—Do they support the internationalism Marx preached even if it means abiding by an utterly compromised European Union that preaches austerity, the elimination of the welfare state, and the gospel of free market economies along with the mass immigration that such economies require to ensure cheap labor? Do they look at Brexiters as just a bunch of nationalistic bigots, or recognize legitimate concerns that workers have about job threats from masses of immigrants who were forced from their homelands by neoliberal policies and the endless wars that global capitalism promotes?

So where have those workers outside the United States turned? To the new, anti-establishment parties that, unlike Trump, have indeed delivered on promises even as they preach a new kind of nationalism and refuse to get bogged down in the endless identity politics that have undermined the Democratic Party’s credibility with much of the U.S. working class.

In Poland, the so-called “right wing” and since-2015 ruling Law and Justice Party (PIS) may be jingoistic, proudly Christian, fiercely pro-life, and sharply critical of immigration, but it has also created a child allowance for poor families equal to one-third of the minimum wage while also increasing the minimum wage, lowered the retirement age from 67 to 65, and “significantly improved” the lives of workers and the poor in Poland, according to writer Adam Rogalewski in London-based International Union Rights magazine.

In Hungary, Prime Minister Viktor Orbán of the ruling (since 2010) Fidesz party rose to power bemoaning the disappearance of “national sovereignty, autonomy” and warned that unelected international powers like the EU and International Monetary Fund have practically destroyed democracy.

“According to the threat presented by the ruling party, the traditional local elites and left … are amoral, serve foreign interests, that of international companies, organisations (sic), local comprador bourgeoisie, and as their `agents’ help the settling of multinationals and their parasitism,” writes Hungarian trade union leader Károly György in International Union Rights.

The response of political parties and organizations on the Left in Europe thus far has largely been to fight among themselves and ultimately to fail to respond to the challenges posed by these populists on the right. Many of their members vote for those populists. Add to this a 50 percent decline in trade union membership in Western Europe between 1980 and 2015.

“The Left has become increasingly cut off from its historic constituency, the workers and the poor of Europe, who have naturally sought a political voice elsewhere,” says University of London economics professor Costas Lapavitsas in the Monthly Review, an independent socialist magazine.  “Inevitably the vacuum created by the Left has been steadily filled by some of the worst political forces in European history, including the extreme right.”

Here in the United States, the incoming Biden Administration faces the same challenge. The neoliberal background of Biden and the establishment Democratic Party raises strong concerns, but memory of the losses they suffered in the 2010 mid-term elections could force them finally to work seriously to re-establish the strong working class ties that the party of Franklin Roosevelt once enjoyed. On the campaign trail Biden indeed talked a lot about the need for good union jobs, and he will have Bernie Sanders looking over his shoulder.

Joseph B. Atkins is a veteran journalist and professor of journalism at the University of Mississippi who writes frequently about labor. He is the author of Harry Dean Stanton: Hollywood’s Zen Rebel (University Press of Kentucky, 2020), Covering for the Bosses: Labor and the Southern Press (University Press of Mississippi, 2008), and the novel Casey’s Last Chance (Sartoris Literary Group, 2015). His blog ishttp://www.laborsouth.blogspot.com, and he can be reached at jbatkins3@gmail.com.