Unemployment Is Much Worse Than You Think — Here’s Why.

The problem for many Americans isn’t getting a job, it’s getting enough hours at decent wages. Our topline numbers obscure that reality. 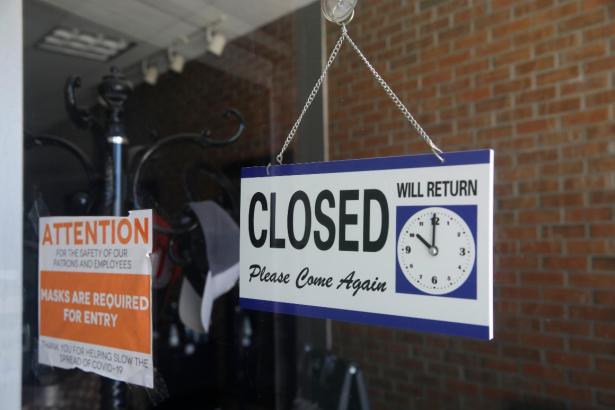 A closed sign hangs in the window of a barber shop in Burbank, Calif. , Marcio Jose Sanchez/AP Photo

We all know that millions of Americans are out of work. But how many, and where? For decades, we’ve been relying on the unemployment rate compiled each month by the Bureau of Labor Statistics to answer that question. Over the years, the rate of unemployment has become not just a gauge of the health of the labor market but the most common yardstick policymakers use to assess the health of the economy as a whole.

By this measure, despite the pandemic, things don’t look so bad right now. The headline unemployment rate for December stood at 6.7 percent. In recent years, there’s been some public recognition that that the headline rate is something of an undercount, since it only includes people actively looking for work; so-called discouraged workers who are unsure of how to go about a job search or who are too discouraged to try any more don’t show up in that top-line number. And, for decades now, the BLS has diligently supplemented the headline unemployment rate with additional information about these workers.

But it turns out that discouraged workers aren’t the only problem with the unemployment rate. In fact, these days the headline unemployment rate isn’t just an undercount, it actually paints an alternate reality that masks the degree to which low- and moderate-income people are hurting. As a result, policymakers believe these Americans are better off than they actually are.

There are two additional problems with the way we count people who are unemployed.

First, there’s no accounting for how many hours a part-time worker is working. By the BLS’ traditional definition, a handyman or private nurse who works for a single afternoon each week is counted in the headline national unemployment figure as “employed,” even if they want more work but can’t find it. Our unemployment figures make it look like the person working a handful of hours because that’s the only work they can get is just as “employed” as a full-time CEO. In practice, this means that the unemployment rate actively obscures how many workers are living in poverty in part not because they don’t have a job, but because they can’t get enough hours.

Second, the data doesn’t indicate whether the job a worker is doing pays enough to keep them out of poverty. The assumption implicit in the data is that if you’re “employed,” all should be well, but as the growing movement toward raising the minimum wage attests, it’s increasingly clear that many American workers are employed, often full-time, but still living in poverty.

So it’s time to stop using the unemployment rate as shorthand for how well the economy is going. After all, what good is an indicator that counts someone so underemployed that his family is living in poverty on the same side of the economic ledger as someone in the top 1 percent?

To be clear, the problem isn’t the data itself — the survey data compiled by the federal BLS remains the gold standard for assessing the labor market. The problem is that policymakers depend on the picture painted by the top-line statistic to help them understand reality. That picture is completely different if you filter the same BLS data to exclude part-time workers looking for full-time work and those making less than a poverty wage (pegged conservatively at $20,000 per year).

Anyone who wants full-time work but can only find part-time work, and those working full-time but earning too little to climb above the poverty line, should be considered functionally unemployed. I’ve begun to calculate this, which I’ve dubbed the True Rate of Unemployment. And the TRU in December wasn’t 6.7 percent — it was an alarming 25.1 percent.

The divergence between the official unemployment numbers and functional unemployment is stark, and it was bad even before the pandemic. In February 2020, when the economy was supposedly “hot,” the official BLS release suggested that a mere 3.5 percent of Americans were unemployed, but the “TRU” number was 24 percent. Think of that. So even when the economy was purportedly at its peak before the pandemic, approximately a quarter of Americans looking for full-time work at a livable wage couldn’t find it. And then at the nation’s worst moment in nearly a century, that number jumped, showing that 32.4 percent of the workforce was out of luck.

It gets worse. I’ve also been calculating the ratio of working-age adults who are functionally unemployed to the population at large, which would include those discouraged workers who’ve stopped looking for unemployment. As of December, a full 53.9 percent of working-age Americans do not have living-wage full-time jobs. More disheartening still: It’s 80 percent for those without a high school degree, and 59.5 percent for those with only a high school diploma.

Maybe most troublesome, our research reveals that Black Americans tend to glean marginally better employment opportunities for themselves during boom times — but then fall back farther when the economy turns sour, preventing them from ever establishing a real toehold toward economic equality. Today, the situation for Black Americans is disgraceful, with 30.2 percent unemployed by TRU, compared with 22.7 percent for white Americans.

The bottom line for too many Americans and for minorities in particular, is that for a long, long time, the American economy has not been performing as well as the headline unemployment rate suggests. And while that may be news to those living in comfortable neighborhoods and suburbs, it will not surprise those living in more downtrodden corners of many cities, let alone those who are living in places like the largely forgotten city where I grew up, York, Pa. Over the last several decades, as businesses including York Dental or York Air Conditioner have either closed facilities or scaled back, middle-class prosperity has become more of an impossible dream than an American Dream.

Washington, D.C., has failed to respond appropriately because the headline unemployment figures, particularly in good times, have given some policymakers of both parties license to embrace a narrative that in the absence of a crisis like the one we’re enduring today, our economic approach works fairly well.

We need an economic agenda born from the realization that the true unemployment picture is much worse than policymakers realize. A quarter of the workforce, including a disproportionate share of minority communities, can’t land a full-time job with a living wage even when the overall economy appears to be healthy. The window through which we view the economy matters. We’ve been using a broken measuring stick to keep track of our success.

It’s time to take a hard look at just what the unemployment rate tells us and stop thinking that it’s a good measure of overall economic performance. Until we begin seeing the economic landscape as it is, policymakers are unlikely to make much headway toward fostering the kind of economic growth that will have a genuine, broad-based impact on the lives of struggling Americans.

Eugene Ludwig is chairman of the Ludwig Institute for Shared Economic Prosperity (LISEP) and former U.S. Comptroller of the Currency. He is author of The Vanishing American Dream: A Frank Look at the Economic Realities Facing Low- and Middle-Income Americans.