Hidden Hunger - How Families Slip Through

One in 10 Bay Area residents earns too little to cover the cost of living; of those, 62 percent earn too much to qualify for food stamps. 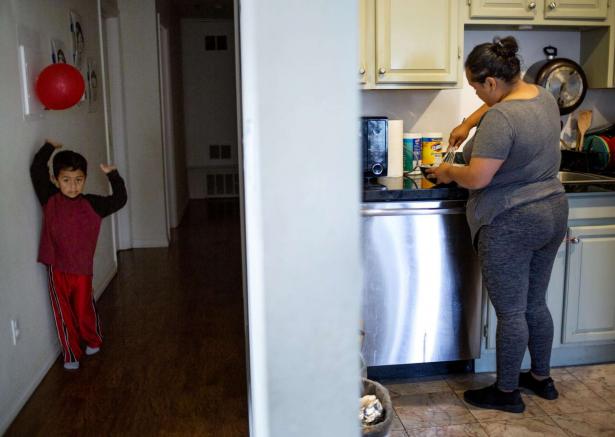 The Bay Area’s hidden hungry are the Hayward delivery driver and homemaker who rely on the food bank to feed their family of five. They are the seniors struggling to get enough to eat in East Palo Alto, just 2 miles from Facebook headquarters and its free employee meals. They are the diabetics showing up in emergency rooms in Oakland with low blood sugar at the end of the month because they ran out of food. They are the undocumented families sharing tiny apartments in the South Bay, cooking beans on camp stoves in their bedrooms.

More than 1 of every 10 people in the Bay Area today are hungry. But they are not only the visibly famished, digging through the trash in Union Square for the remains of someone’s lunch. They are low-income families that have jobs and housing but have still fallen through the cracks during the Bay Area’s spectacular rebound from the recession, as it has become the country’s richest and most expensive region.

“They’re living right next to our churches. They go to the schools that our kids go to,” said David Ko, a former pastor at Wesley United Methodist Church in San Jose, which has a free grocery delivery program for impoverished families in San Jose. “But we don’t really see them.”

Even while unemployment remains historically low, 11.5 percent of Bay Area residents — about 870,000 people — are food insecure, defined as having limited or uncertain access to adequate food, according to Feeding America, a nonprofit food bank network.

When you factor in the cost of housing, though, the situation is even worse. The city of San Francisco considers anyone with an income at or below twice the federal poverty level, or $50,200 for a household of four, to be at the highest risk of food insecurity. In San Francisco, 27 percent of residents fall within that income bracket.

That’s nearly a quarter-million people in the city’s 47 square miles.

The populations most impacted by hunger are also the most vulnerable members of society: the Bay Area’s children and senior citizens. Even in Silicon Valley, one in three children — about 200,000 — are food insecure, according to Second Harvest Food Bank, which services Santa Clara and San Mateo counties.

“In the recovery of the economy we’ve really left our lowest-income population behind,” said Hilary Seligman, associate professor of medicine at UC San Francisco and director of UCSF’s Food Policy, Health and Hunger Research Program. “The depth and breadth of people who are in food insecurity is worse.”

Food insecure people often can afford only one or two meals a day and may skip meals so their children can eat. And, because unhealthy food usually costs less, food insecurity can often lead to diabetes, obesity and other health problems.

“The money in your household is fungible. You move money around depending on what you need the most on a given day, often going from emergency to emergency,” continued Seligman. “Housing is paid in one big check. You can’t afford to lose that housing, so food often gets left to last.”

Among the remarkable things we learned is that the Bay Area’s hidden hungry are subject to a cruel irony. While their income doesn’t keep up with the cost of living in the expensive region, the relatively high local minimum wage can make them ineligible for the federal Supplemental Nutrition Assistance Program (SNAP), or food stamps. And even when they do qualify, the benefit only covers a fraction of the cost of each meal.

That’s why Bay Area food banks have opened dozens of new food pantries across the region, including in affluent cities like Mountain View, home to Google, and Tiburon, where the median value of owner-occupied housing units is $1.85 million, according to 2016 census data. 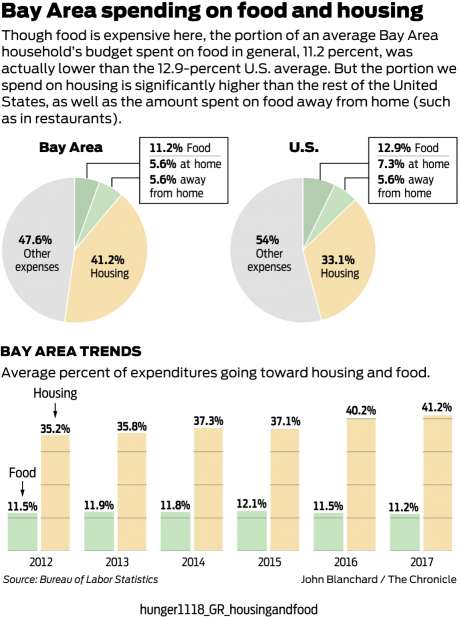 During the last year alone, 27 pantries have sprouted up in Santa Clara and San Mateo county schools, allowing students and their parents to pick up bags of groceries.

In San Francisco and Marin, just 14 percent of the San Francisco-Marin Food Bank’s 225,000 clients are homeless. The remaining 193,000 are the working poor whose refrigerators simply run empty by the end of the month.

“How is it that people don’t have enough for three meals a day in such a wealthy area?”