Indigenous groups and environmental activists are also calling on President Biden to stop the Dakota Access Pipeline and Enbridge Line 3. 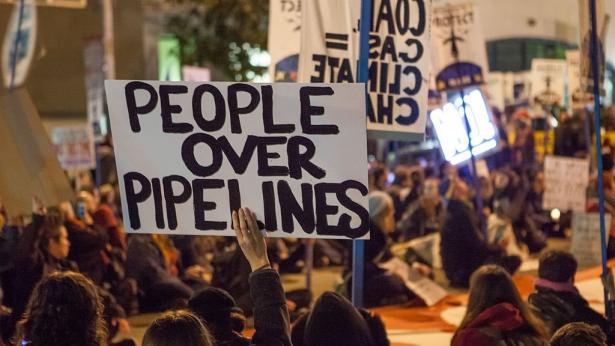 Protesters against the Dakota Access Pipeline and the Keystone XL Pipeline,Creative Commons

On his first day in office, President Joe Biden canceled the Keystone XL Pipeline, which has been a pendulum swinging back and forth since Obama denied a key permit for the pipeline in 2015 and Trump reversed that decision in 2017. Now, Sioux tribes are calling on Biden to stop the Dakota Access Pipeline and Anishinaabe tribes are calling on him to stop the Enbridge Line 3, thereby taking the next steps to ensure justice for future generations.

Vice President Kamala Harris, Secretary of the Interior nominee Deb Haaland, and Congress members Cory Booker, Raul Grijalva, and Alexandria Ocasio-Cortez, among others, have all called for DAPL to be shut down.

Since it was proposed in 2008, Keystone XL has faced a decade of protest and legal action led by Indigenous communities and involving farmers and ranchers, environmental activists and groups.

The $8 billion pipeline would transport 830,000 barrels of tar sands oil per day from Alberta, Canada to the Gulf Coast of the United States, running 1,700 miles and crossing rivers and aquifers, including the Ogallala Aquifer. Tar sands oil is acidic and corrosive, leading to a greater risk that the pipelines carrying it will leak and contaminate surrounding communities.

The oil industry argues that Keystone XL would create 20,000 direct jobs and 118,000 indirect jobs, but the U.S. Department of State’s Environmental Impact Statement found that the project would only generate about 3,900 temporary construction jobs for a two-year building period,  which drops to thirty-five permanent positions once the pipeline is complete.

The Dakota Access Pipeline is a 1,172-mile pipeline that transports crude oil from the shale oil fields in the Bakken formation of North Dakota, through the neighboring states of South Dakota and Iowa, to an oil terminal in Illinois. It runs through the territories of the Lakota Oyate, passing by the Standing Rock Indian Reservation.

The pipeline, owned by Energy Transfer Partners, MarEn Bakken Company, and Phillips 66, was announced in 2014 and began operation on June 1, 2017. MarEn Bakken is owned by MPLX LP and Enbridge Energy Partners, which also runs Enbridge Line 3.

In his book, Our History Is the Future, Nick Estes presents two centuries of the region’s history, struggles for land and water, and how they inform the present. He discusses how the pipeline was rerouted to move away from white communities and run closer to the Standing Rock Indian Reservation, a move that has been decried for its environmental racism.

“Keystone and Line 3 reflect the twilight of the fossil fuel era.”

In April 2016, Joye Braun Wanbli Wiyan Ka’win or Eagle Feather Woman (of the Cheyenne River Sioux) camped out in protest of the pipeline. The small encampment at the Standing Rock Indian Reservation grew into a large Indigenous protest movement and brought international attention to the pipeline.

The day before Biden was inaugurated, the Standing Rock Sioux Tribe released a video in the Lakota language calling for the Dakota Access Pipeline to be shut down.

On the heels of Biden’s decision to stop the Keystone XL pipeline, leaders of four Sioux tribes—the Cheyenne River Sioux, Oglala Sioux, Standing Rock Sioux, and Yankton Sioux—sent a letter to Biden, asking him to stop operation of the Dakota Access Pipeline.

On Tuesday, January 26, the U.S. Court of Appeals issued a ruling against the Dakota Access Pipeline, upholding a federal court’s decision that revoked a key pipeline permit, finding that the U.S. Army Corps of Engineers violated key environmental laws, and it required a full environmental impact statement (EIS) to study the risks it posed to the Standing Rock Sioux Tribe. While the ruling does not require a shutdown, the 2020 revocation of the permit affirms that the pipeline is operating illegally.

Standing Rock Sioux Tribe Chairman Mike Faith said in a statement issued January 26: “We are pleased that the D.C. Circuit affirmed the necessity of a full environmental review, and we look forward to showing the U.S. Army Corps of Engineers why this pipeline is too dangerous to operate.”

Jan Hasselman, attorney with Earthjustice, representing the Standing Rock Sioux Tribe in litigation since 2016, declared: “Today we’ve reached another milestone in our four-year legal battle on behalf of the Standing Rock Sioux to shut down this pipeline. This decision affirms what the Tribe has been saying from the start—this pipeline is a threat to clean water and Indigenous sovereignty, and we must examine the consequences it brings for the future.”

Vice President Kamala Harris, Secretary of the Interior nominee Deb Haaland, and Congress members Cory Booker, Raul Grijalva, and Alexandria Ocasio-Cortez, among others, have all called for DAPL to be shut down.

Hasselman tells The Progressive, “A federal court has declared that the pipeline is operating illegally, and never should have been built without a full environmental review. If President Biden is going to keep his commitments to Indian Country, closing down DAPL must be a priority.”

The 1,097 mile-long Enbridge Line 3 crude oil pipeline runs from Edmonton, Alberta, to Superior, Wisconsin. The original line has been operating since 1968. According to the Minnesota Department of Commerce’s Final Environmental Impact Statement, “Line 3 is old and has integrity problems. Built in 1962 and 1963, Line 3 has corroded and cracked over time ... necessitating more than 950 excavations in the last 16 years.” It added: “Line 3 has had 10 times as many anomalies per mile as any other pipeline in the Mainline corridor.” 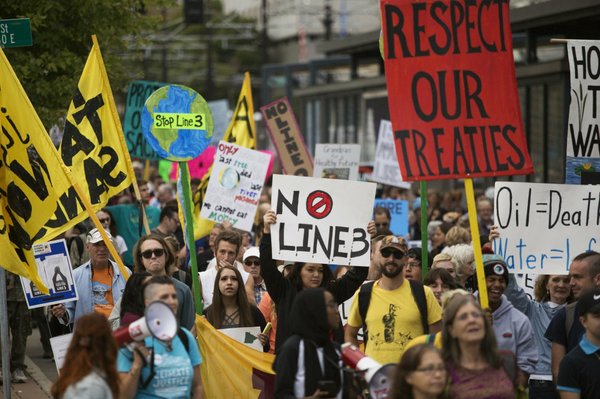 Due to risks from the aged infrastructure, Enbridge says it has reduced the amount of oil it transports and announced plans in 2014 to build the new pipeline. The project was approved in 2016 in Canada, and by the U.S. states of North Dakota and Wisconsin.

In Minnesota, opposition has been fierce and widespread. The pipeline would cross several tribal territories, including that of the Anishinaabe (Ojibwe, Chippewa). It would cut across 200 bodies of water and 800 wetlands, crucial for fishing and growing rice, including the Mississippi River headwaters heading into Lake Superior.

A broad coalition in Minnesota opposes the Enbridge Line 3 pipeline, including Indigenous groups and environmental organizations. Minnesota’s Public Utilities Commission (PUC) held sixteen public hearings in eight communities, inviting input at the public hearings or via written comment. Of 72,249 comments submitted, 68,244 of them, that is more than 94 percent, were opposed. Nonetheless, in 2018, the PUC approved the proposed route and the first permits.

A coalition of environmental groups known as Oil Change International argues that Line 3 would be equivalent to adding fifty new coal-fired power plants and would “wipe out any gains our state [of Minnesota] plans to make to reverse climate change, setting us back further in the transition away from burning fossil fuels.”

Ojibwe oppose the project as it runs through lands they ceded to the United States with the understanding that, as the 1837 Treaty states: “The privilege of hunting, fishing, and gathering the wild rice, upon the lands, the rivers and the lakes included in the territory ceded, is guaranteed to the Indians.”

Winona LaDuke, executive director and co-founder of Honor the Earth, a national Native-led environmental organization, tells The Progressive: “Keystone and Line 3 reflect the twilight of the fossil fuel era. As investors flee oil for renewables, Governor Walz picked the wrong time to jam through a massive new pipeline opposed by tribal governments, Minnesotans, his own Commerce Department, and Lieutenant Governor Peggy Flannagan, who is also a member of the White Earth reservation. We hope President Biden will nullify the U.S. Army Corps of Engineers’ permit for Line 3 to prevent any further destruction of our lands and end the tar sands oil threat to Minnesota’s drinking water and climate. It’s time to make the just transition.”

Pressure is sure to continue. In December, two Ojibwe bands, together with Honor the Earth and the Sierra Club, filed a federal lawsuit to stop construction on Enbridge Line 3. Two weeks ago, more than seventy-five Indigenous female leaders from across the country called for President Biden to stop all fossil fuel projects on their lands.

With their sights set on a fossil-free and more equitable future, Indigenous leaders and environmental activists are standing firm on their demands of the new President.

Get the latest Progressive news
Subscribe for our free newsl