film Chorus and Catharsis: A Breakdown of One Night in Miami's Best Scene

One Night in Miami is incisive about the pressures of Black celebrity, and its central dialogue circles the question of what its characters—all icons in their own right—owe to both the Black community at large and a nascent civil rights movement. 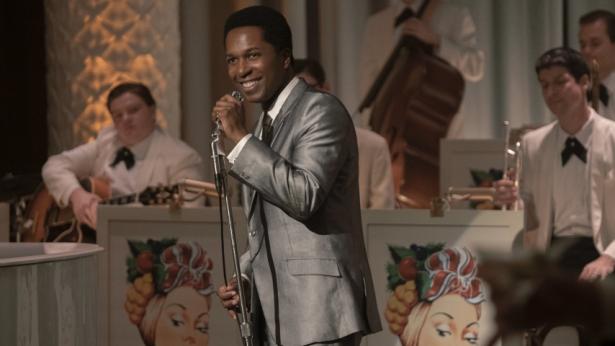 Regina King’s electrifying One Night in Miami brings four Black American icons together under one roof. Then, it lets them talk. Adapting Kemp Powers’ one-act play of the same name, this fictional account of a real evening—February 25, 1964, the night a young Cassius Clay (soon to rename himself Muhammad Ali) beat Sonny Liston to become the world heavyweight boxing champ—imagines the conversations that might have taken place after that bout.

Inside a motel room at the Hampton House, Clay (Eli Goree) celebrates his win with friend Malcolm X (Kingsley Ben-Adir), football star Jim Brown (Aldis Hodge) and soul legend Sam Cooke (Leslie Odom, Jr.). Allowing audiences to eavesdrop on this gathering (which did happen, though little else about it is known), King’s fly-on-the-wall approach and Powers’ incisive script give us something beyond hagiography: A jaggedly passionate meeting of minds too agile, empowered and ambitious not to see the bigger picture.

Lively, often volatile debates between the four—encompassing the struggle for racial equality, the nature of Black celebrity and brotherhood, and their differing routes to economic and political prominence—dominate King’s film, transforming it into a spirited dialectic of race, place, and nation. But One Night in Miami, for all its bottled ideological tension, finds its most cinematically potent moment away from the central motel rendezvous, in a show-stopping sequence where Odom’s Cooke salvages a concert gone awry by performing “Chain Gang” a capella—granting this unapologetically talky picture a cathartic choral release.

Throughout the film, conflicts erupt between Malcolm and Cooke, one calling for revolution against racist power structures while the other works within them to his benefit, and the two progressively pull fewer punches with one another. After a particularly brutal dressing-down by Malcolm, aimed at Cooke’s perceived political silence and pandering to white audiences, Cooke storms out, followed shortly by Clay. When he returns to the room to gather his things, Malcolm (defused somewhat by Brown) catches him again in conversation, revealing that he’s actually attended five of Cooke’s shows—including that one in Boston.

“Shit,” Cooke chuckles. “Boston?” Malcolm tells the story—and King, after trading the hotel’s ambient noise for the sounds of distant applause, drops us into the front row of Cooke’s concert, as opener Jackie Wilson (Jeremy Pope) struts and preens to “Lonely Teardrops,” working the crowd. “Not really my cup of tea,” confides Malcolm, whom we glimpse at the back of the venue. “Sam was getting ready to come on stage. Yeah, I knew he was about to class this joint up.”

Though Malcolm’s narration sets the scene, King never relinquishes her camera to his point of view. Capturing different angles from the perspective of Black men and women on the concert floor, while also including behind-the-curtain details—like Wilson snarking a not-so-friendly “Don’t fuck up now” as he heads off stage—that only Cooke could have known, she establishes that this memory, regardless of who’s telling it, belongs to no one so much as history.

Cooke takes the stage as King and editor Tariq Anwar cut back to the motel, where Cooke has set down his guitar case to perch on one of the beds. Malcolm recalls Cooke tenderly caressing the mic—“You know how Sam does”—earning a laugh. Powers’ script glimmers here, as the four separately picture it; teasingly, Malcolm suggests Cooke admiring a rare gem, Clay compares it to a lover’s touch and Brown brings up an NFL championship trophy. The tension has dissipated; for a moment, we see Cooke’s face and realize just how keen he is to relive this moment through Malcolm’s eyes.

Then, as Cooke sings the first notes of his biggest hit—the swooning “You Send Me”—we hear the dissonant squawk of feedback, followed by a pop. Malcolm draws a finger across his throat: “Sound went out.” Clay gasps. Within seconds the crowd has rounded on Cooke. A piece of popcorn pelts his shoulder; as he looks out, the crowd’s vocal discontent quickly outweighs any residual cheering.

Faced with a busted sound system and an amped Boston crowd, his backing musicians make a break for it. As Cooke dryly observes, “My band was out of there like some runaway slaves.” Their haste, and this wording, speak volumes: Unable to perform, Cooke and the other players know how vulnerable they are—that their humanity will only be validated so long as they give the people what they came for.

At the back of the venue, Malcolm’s mouth moves as he whispers in voiceover, “This young brother is fittin’ to get himself killed.” Without his mic, Cooke is disarmed, more imperiled by the minute. For a beat, the filmmakers linger in the motel room; as Clay presses Malcolm for more, he remembers with a smile, “Something…something amazing happened.”

King’s framing of Cooke in this sequence is openly reverential. From the stage, he towers above the crowd; at the front, one young woman is eye-level with his knees, watching intently as he brings one foot down (Ooh.) and swings his arms up (Ah!). Filmed from behind, Cooke stands tall, one man before a swaying sea of bodies. His head is slightly lowered; around it, the warmly diffuse spotlight suggests a halo. This is no longer the chaos mounting a few moments ago. This is church.

As Cooke grunts and stomps, the crowd’s jeers fade and they pick up the chant. King and Anwar match this tempo, almost imperceptibly speeding up their cuts. Ooh. On stage, Cooke’s eyes blaze; even from the venue’s center, his conviction is palpable. Ah! The front row nods up at him, entranced. Ooh. We see one shoe clack down against the floor. Ah!

Just for a breath, King and Anwar cut back to the motel. Ooh. All four men sit close, attentive, two on each bed. Malcolm’s head sways in time as he exhales, “Ah!” More people in the crowd are joining in. “All together, yeah!” Cooke croons in that honeyed tenor, rolling his shoulders back. “Every-body!” More feet hit the floor, louder. Ooh. Malcolm stops to look back and can see, from a distance, Cooke stretching his hands wide. Ah! This time, when one shoe comes down, its sound deafens; off screen, hundreds are amplifying the chant. Just like that, the entire room is in rhythm. Ooh! At the motel, everyone’s listening—especially Cassius, who joins Malcolm on the explosive “Ah!”

Cooke launches into the opening verse of “Chain Gang” and this collective chanting only swells. As Malcolm steps into the crowd, squinting, he can see Cooke gesturing and swaying from the stage. That silky-smooth voice has never sounded so immense, but by now he’s harnessed the energy of the crowd, thousands lifting the irrepressible melody of his anthem until the performance is theirs as well. That the song in question is directly about prison labor, the violent exploitation of Black bodies by a white carceral state, makes hearing it amplified by an all-Black audience feel all the more seismic. Meditating on just one tool of racist terror and control, “Chain Gang” resonates in this setting as an expression of remembrance, strength and solidarity.

The filmmakers know when not to cut away. Cooke’s rendition is a stunner, and they afford him the full measure of his power. Kept out of sight as King’s camera lingers in this perfect moment, Malcolm’s awed voiceover concludes, “I saw him up there, covered in sweat, and singing to them. But in the back, you couldn’t hear anything except that chant. And you know what? That was good enough. Yes, that was one hell of a show, Sam…”

The standout sequence in a film constructed of richly thought-provoking conversations, this bit of miracle-working musicality also deftly clarifies One Night in Miami’s vision of the bond between Sam and Malcolm. Intense and acrimonious, often explosively so, their dialogue is rooted in a deep mutual respect and admiration—one Malcolm realizes too late in the evening he has needed to reaffirm. Not simply leaders in their respective spheres but preachers to overlapping nationwide congregations, these two men had the potential to truly see and hear one another, perhaps better than anyone. “Brother, you could move mountains without lifting a finger,” Malcolm reminds Cooke. Driving their many confrontations over the course of the night is Malcolm’s recognition of this gift.

One Night in Miami is incisive about the pressures of Black celebrity, and its central dialogue circles the question of what its characters—all icons in their own right—owe to both the Black community at large and a nascent civil rights movement. To what degree should they champion causes greater than themselves? In times of struggle, is doing so a moral imperative?

For Cooke, this line of questioning carries a particular sting, one Malcolm is all too eager to agitate, calling him a “windup toy in a music box” and frequently casting aspersions on Sam’s ability to bridge the divide between Black and white music. At one point, needling Cooke over what Malcolm perceives as political ambivalence in his music, Malcolm puts on “Blowin’ in the Wind” by Bob Dylan, going so far as to contend that one song—by “a white boy from Minnesota,” he stresses—speaks more to the civil rights movement than an entire catalog of Cooke’s romantic ballads. “It doesn’t make you angry?” Malcolm taunts.

Though One Night in Miami allows Malcolm that moment, his criticism is not entirely fair. Holding the success of Dylan’s protest anthem up against Cooke’s earlier assertion that “being vocally in the struggle is bad for business,” Malcolm leaves unacknowledged the harsh realities of a mainstream that only acknowledged protest from select quarters—and accepted some visions of Black artistry more readily than others. Ignoring both the political fire of songs like “Chain Gang” and the strategy behind Cooke’s music label, which produced mainly Black gospel singers, Maclolm can’t admit that Cooke’s economic freedom affords him an incredibly viable form of Black power.

The tragedy of One Night in Miami lies in the unresolved conflict between these two great men; it’s impossibly heightened by the knowledge that neither had long left to live. By February of 1964, all four of its central figures were at career crossroads, but these two were approaching their ends. A year later, Malcolm X would be assassinated in New York, amid escalating tensions between him and the Nation of Islam. Cooke didn’t even live out the year: That December, cut down in his prime, he was murdered at a seedy L.A. motel.

But One Night in Miami balances its more incendiary and elegiac discourses best through the raw emotional power of its soaring “Chain Gang” climax. In one virtuoso sequence, One Night in Miami lets Malcolm lay bare the foundation of his friendship with Cooke, permits the foursome a moment of breathless appreciation and, in a moment of pure movie magic, shows its audience—more than words ever could—the heart and soul of a legend.

Isaac Feldberg is an entertainment journalist currently based in Boston, who’s been writing professionally for seven years and hopes to stay at it for a few years more. Frequently over-excited and under-caffeinated, he sits down to surf the Criterion Channel but ends up, inevitably, on Shudder. You can find him on Twitter at @isaacfeldberg.