We analyzed 193 people arrested in connection with the January 6 riot—and found a new kind of American radicalism. 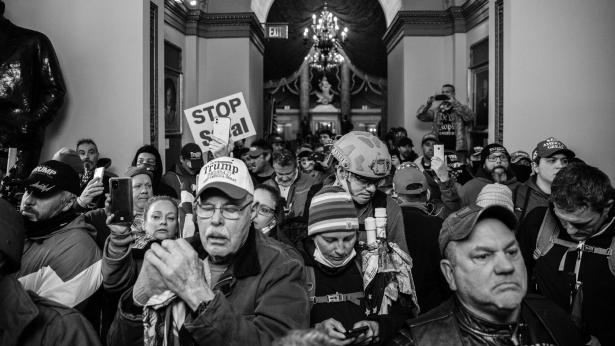 On January 6, a mob of about 800 stormed the U.S. Capitol in support of former President Donald Trump, and many people made quick assumptions regarding who the insurrectionists were. Because a number of the rioters prominently displayed symbols of right-wing militias, for instance, some experts called for a crackdown on such groups. Violence organized and carried out by far-right militant organizations is disturbing, but it at least falls into a category familiar to law enforcement and the general public. However, a closer look at the people suspected of taking part in the Capitol riot suggests a different and potentially far more dangerous problem: a new kind of violent mass movement in which more “normal” Trump supporters—middle-class and, in many cases, middle-aged people without obvious ties to the far right—joined with extremists in an attempt to overturn a presidential election.

To understand the events of January 6 and devise solutions to prevent their recurrence, Americans need a fine-grained comprehension of who attacked the Capitol. Understanding the ideology and beliefs of those who commit political violence is important, but so is knowing what kind of people they are and what their lives are like.

For the past decade and a half, our research team at the Chicago Project on Security and Threats has conducted demographic studies of international and domestic terrorists. Four years ago, our study of 112 people who U.S. authorities suspected were involved with the Islamic State undercut a widespread assumption that supporters of the group were uneducated, isolated, and unemployed.

In recent weeks, our team of more than 20 researchers has been reviewing court documents and media coverage for information on the demographics, socioeconomic traits, and militant-group affiliations (if any) of everyone arrested by the FBI, Capitol Police, and Washington, D.C., police for offenses related to the January 6 insurrection. As of late last week, 235 people fell into that category, and the number is expected to grow.

Of these suspects, 193 have been charged with being inside the Capitol building or with breaking through barriers to enter the Capitol grounds. We focused our research on these 193. We compared our findings on these suspected insurrectionists with demographic data that we had previously compiled on the 108 individuals arrested by the FBI and local law-enforcement agencies around the country for violence related to right-wing political causes from 2015 to 2020. We used the same methodology to analyze both groups: Our team reviewed all court documents related to each arrest—which include criminal complaints, statement of facts, and affidavits—and conducted searches of media coverage of each arrestee. Four findings stand out.

First, the attack on the Capitol was unmistakably an act of political violence, not merely an exercise in vandalism or trespassing amid a disorderly protest that had spiraled out of control. The overwhelming reason for action, cited again and again in court documents, was that arrestees were following Trump’s orders to keep Congress from certifying Joe Biden as the presidential-election winner. Dozens of arrestees, court records indicate, made statements explaining their intentions in detail on social media or in interviews with the FBI. “I am incredibly proud to be a patriot today,” wrote a 37-year-old man from Beverly Hills, California, “to stand up tall in defense of liberty & the Constitution, to support Trump & #MAGAforever, & to send the message: WE ARE NEVER CONCEDING A STOLEN ELECTION.”

Second, a large majority of suspects in the Capitol riot have no connection to existing far-right militias, white-nationalist gangs, or other established violent organizations. We erred on the side of inclusion; we counted an arrestee as affiliated with such an organization if any court documents or news articles describe the person as a member, refer to social-media posts expressing an affinity for a certain group, or attest to patches or apparel that directly indicate support.

By these standards, 20 of the Capitol arrestees we studied— one-tenth—can be classified as supporters of gangs, militias, or militia-like groups such as the Proud Boys, Oath Keepers, and Three Percenters. The role that such groups played in the riot has attracted considerable news coverage. But 89 percent of the arrestees have no apparent affiliation with any known militant organization.

Connections were far more common among the suspected right-wing extremists arrested after incidents of deadly violence from 2015 to 2020. Of these, 26 percent were members of white-nationalist gangs (including skinhead groups and the Aryan Brotherhood), and 22 percent were part of militias and other organized groups (such as the Oath Keepers and Three Percenters). 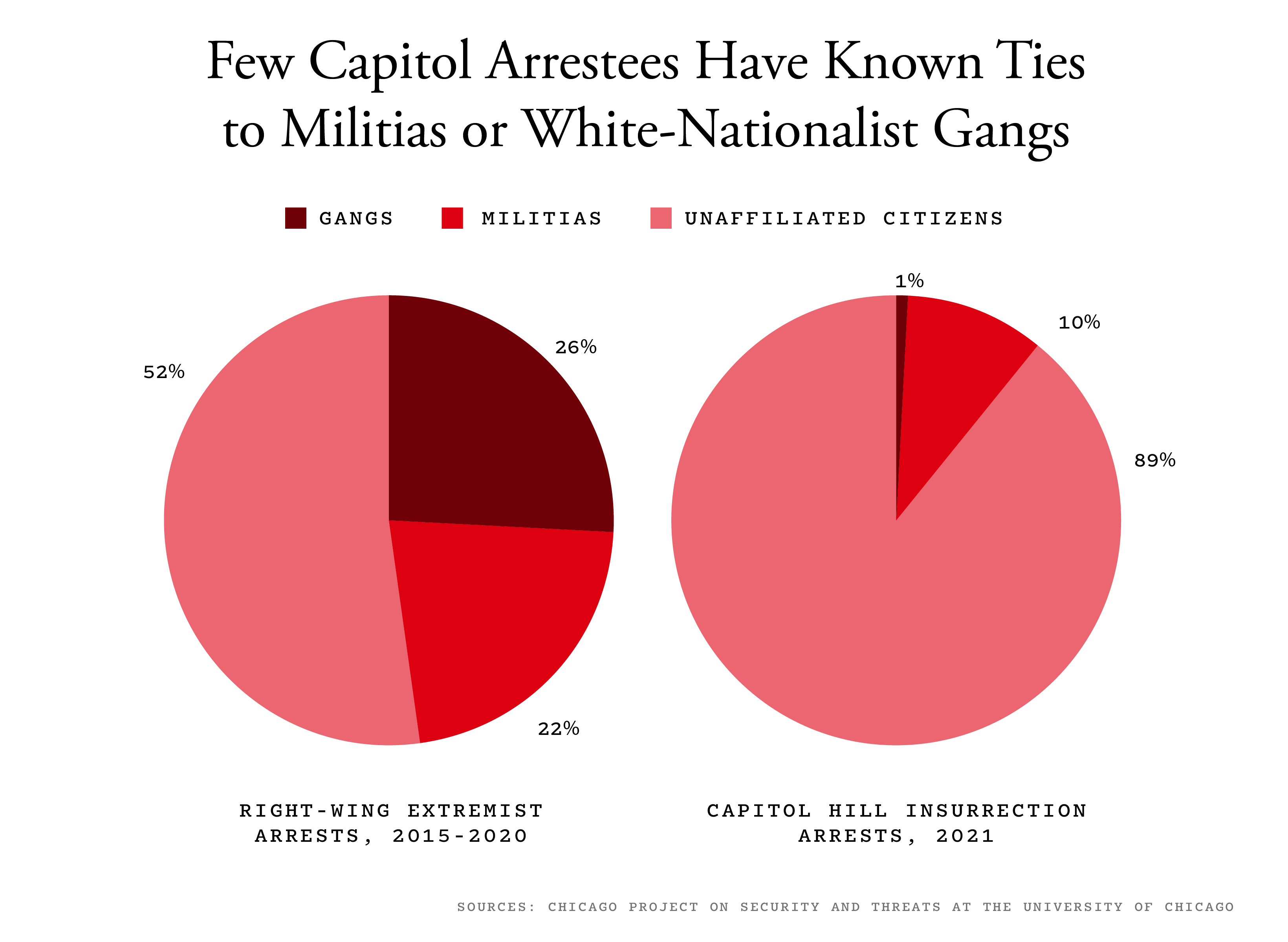 Third, the demographic profile of the suspected Capitol rioters is different from that of past right-wing extremists. The average age of the arrestees we studied is 40. Two-thirds are 35 or older, and 40 percent are business owners or hold white-collar jobs. Unlike the stereotypical extremist, many of the alleged participants in the Capitol riot have a lot to lose. They work as CEOs, shop owners, doctors, lawyers, IT specialists, and accountants. Strikingly, court documents indicate that only 9 percent are unemployed. Of the earlier far-right-extremist suspects we studied, 61 percent were under 35, 25 percent were unemployed, and almost none worked in white-collar occupations.

Fourth, most of the insurrectionists do not come from deep-red strongholds. People familiar with America’s political geography might imagine the Capitol rioters as having marinated in places where they are unlikely to encounter anyone from the opposite side of the political spectrum. Yet of those arrested for their role in the Capitol riot, more than half came from counties that Biden won; one-sixth came from counties that Trump won with less than 60 percent of the vote. 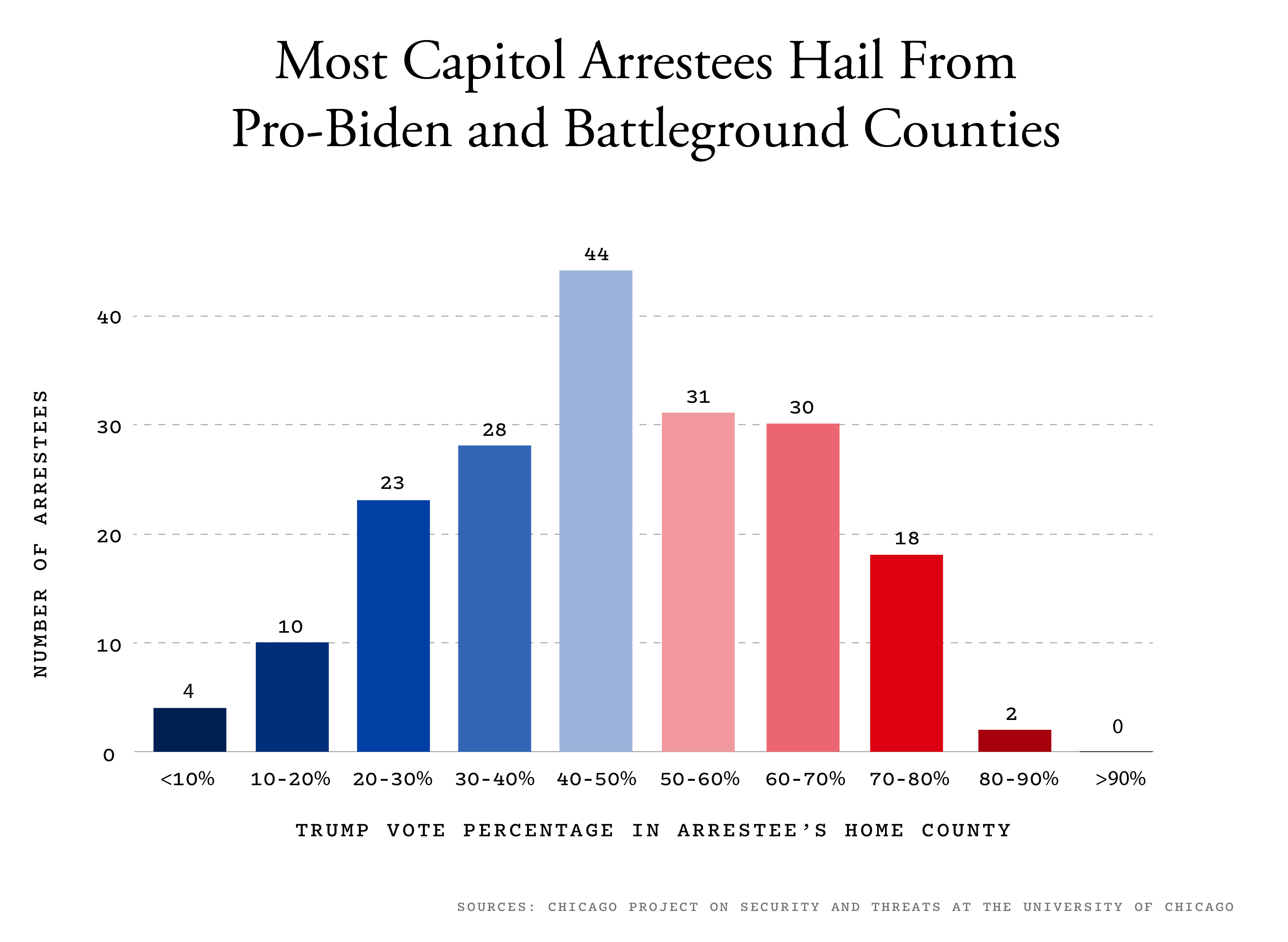 Importantly, our statistics show that the larger the absolute number of Trump voters in a county—regardless of whether he won it—the more likely it was to be home to a Capitol arrestee. Big metropolitan centers where Biden won overwhelmingly, such as the counties that include New York City, San Francisco, and Dallas, still have hundreds of thousands of Trump supporters. A third of suspected insurrectionists come from such counties; another quarter come from suburban counties of large metro areas. This breakdown mirrors the American population as a whole—and that is the point. If you presumed that only the reddest parts of America produce potential insurrectionists, you would be incorrect.

The information that our team analyzed has certain limits. While we studied only people whose alleged behavior triggered an arrest by law enforcement, different police agencies have different standards for when to act. Moreover, the arrests of suspected right-wing extremists as long ago as 2015 might lead to a years-long paper trail that includes evidence of militia or gang affiliations; in contrast, those arrested since January 6 might have affiliations not yet known to investigators. Even so, the court documents about the January 6 insurrection come from FBI, Capitol Police, and D.C. police agents who routinely identify group affiliations of arrested individuals. In fact, it is one of their primary concerns.

What’s clear is that the Capitol riot revealed a new force in American politics—not merely a mix of right-wing organizations, but a broader mass political movement that has violence at its core and draws strength even from places where Trump supporters are in the minority. Preventing further violence from this movement will require a deeper understanding of its activities and participants, and the two of us do not claim to know which political tactics might ultimately prove helpful. But Americans who believe in democratic norms should be wary of pat solutions. Some of the standard methods of countering violent extremism—such as promoting employment or waiting patiently for participants to mellow with age—probably won’t mollify middle-aged, middle-class insurrectionists. And simply targeting better-established far-right organizations will not prevent people like the Capitol rioters from trying to exercise power by force.

ROBERT A. PAPE, a political-science professor at the University of Chicago, is director of the Chicago Project on Security and Threats.

KEVEN RUBY is a senior research associate of the Chicago Project on Security and Threats at the University of Chicago.