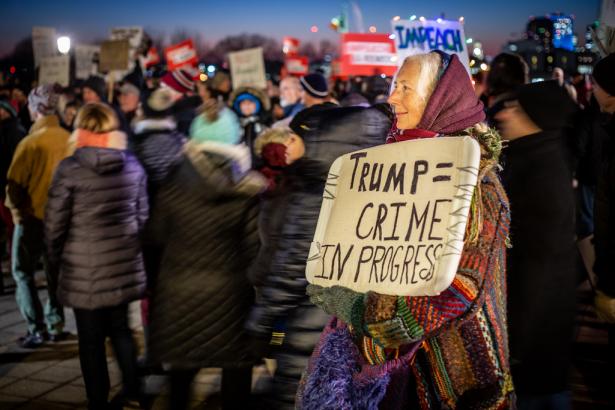 “You know what we used to do in the old days when we were smart with spies and treason, right? We used to handle it a little differently than we do now.” So said President Donald Trump on September 26, 2019, speaking about the person who’d provided information to the whistleblower concerning Trump’s phone conversation with the president of Ukraine, which was the basis for Trump’s first impeachment.

“They were spying … on our campaign … It was treason and it should never be allowed to happen to another president again ever, ever, ever.”

“I think what the Democrats are doing with the border is treasonous.”

“The Times never should have done that, because really what they’ve done is virtually, you know it’s treason.”

Not to mention the FBI:

“I mean, this is the FBI we’re talking about. I think that … is treason.”

“I want Schiff questioned at the highest level for fraud and treason.”

What did the Constitution’s authors mean by “levying war?” According to UC Davis Law School professor Carlton F.W. Larson, author of On Treason: A Citizen’s Guide to the Law,

The Constitution’s drafters understood the term “levying war” to include any armed insurrection to obstruct a law of the United States. When tax protesters in western Pennsylvania attempted to resist the collection of federal excise taxes during the Whiskey Rebellion, President George Washington formed an army to fight them; his administration later indicted a number of the rebels for treason. A few years later, when men in eastern Pennsylvania used force to prevent the collection of a federal property tax, the John Adams administration prosecuted the leaders for treason. Supreme Court justices presiding over these trials all agreed treason had been committed. In 1842, Justice Joseph Story summarized the law, concluding it was treason “by force to prevent the execution of any one or more general and public laws of the government, or to resist the exercise of any legitimate authority of the government in its sovereign capacity.”

The report of the House Judiciary Committee that accompanies the House’s current bill of indictment against President Trump rests its case on the president’s speech of January 6th, which immediately preceded the attack on the Capitol. By so doing, the House has ensured that the trial will be conducted speedily: The speech being a matter of public record, there will be no need to call witnesses. The measures that President Biden seeks to have Congress enact to combat the pandemic and restore the economy will therefore not be delayed.

But in so doing, the House is basing its case on Trump’s commission of “high crimes and misdemeanors” rather than seeking to demonstrate he also violated specific federal laws—most critically, the laws on treason.

Indeed, the House report concludes that no finding of a violation of the federal criminal code is necessary for conviction. Rather, the report states that “President Trump’s conduct need not have violated any federal criminal statute in order for them to constitute ‘high Crimes and Misdemeanors’ under the Constitution”:

It may well be the case that President Trump’s … actions … in seeking to overturn and subvert the certification of the election results … violated the federal criminal code. Ultimately, that is a judgment for prosecutors and courts to make. The only question here is whether President Trump’s conduct warrants impeachment. As the House Judiciary Committee has previously explained, “[o]ffenses against the Constitution are different in kind than offenses against the criminal code … Impeachment and criminality must therefore be assessed separately.”

The report’s position has ample precedent. Alexander Hamilton in The Federalist declared that impeachment will “proceed from the misconduct of public men, or, in other words, from the abuse or violation of some public trust” and “they relate chiefly to injuries done immediately to the society itself.” At the Constitutional Convention, James Madison said that the impeachment provision was necessary because “it [is] indispensable that some provision should be made for defending the Community agst. [sic] the incapacity, negligence or perfidy of the chief Magistrate.” And in 2009, almost a decade before Trump nominated him to the Supreme Court, Justice Brett M. Kavanaugh authored a law review article that declared, “If the President does something dastardly, the impeachment process is available.”

On the other hand, there are those, like attorney Alan Dershowitz, a longtime Trump defender, who argue that proof of a crime is essential to support a conviction in the Senate. That was the position of many of the Republican senators who acquitted Trump in his first impeachment trial one year ago.

But with 45 Republican senators having already voted not to hold this second trial at all, it is now clear that the trial’s purpose has chiefly become one of public education. Given that, the House prosecutors should make clear that Trump’s conduct wasn’t merely “dastardly,” but specifically criminal; that he is guilty of a number of federal crimes—including, but not limited to, treason.

In addition to treason, what would those other crimes, and their respective penalties, be?

Whoever incites, sets on foot, assists, or engages in any rebellion or insurrection against the authority of the United States or the laws thereof, or gives aid or comfort thereto, shall be fined under this title or imprisoned not more than ten years, or both; and shall be incapable of holding any office under the United States (emphasis added).

(a) Whoever … uses any facility of interstate … commerce, including, but not limited to, the mail, telegraph, telephone, radio, or television, with intent—

(2) to organize, promote, encourage, participate in, or carry on a riot; or

(4) to aid or abet any person in inciting or participating in or carrying on a riot or committing any act of violence in furtherance of a riot;

Shall be fined … or imprisoned not more than five years, or both.

“(a) [W]hoever, in any matter within the jurisdiction of the executive, legislative, or judicial branch of the Government of the United States, knowingly and willfully—

(2) makes any materially false, fictitious, or fraudulent statement or representation;

(c) With respect to any matter within the jurisdiction of the legislative branch, subsection (a) shall apply only to—

(2) any investigation or review, conducted pursuant to the authority of any committee, subcommittee, commission or office of the Congress, consistent with applicable rules of the House or Senate.

Martha Stewart, Michael Flynn, “Scooter” Libby, and Michael Cohen were all convicted under this “false statements” statute. As to this law, it may be contended that Trump, in a “matter within the jurisdiction of the … legislative … branch of the Government of the United States of America”—namely, the counting of the Electoral College ballots at the joint session of Congress on January 6—“knowingly and willfully” made “materially false, fictitious and fraudulent statement[s] or representation[s]” to Vice President Pence and others, declaring that Pence had authority to unilaterally send the electoral ballots back to those states for recertification, when it was well established as a legal matter that Pence had no such authority and that his duties were solely ministerial.

As to another relevant Code provision, “18 U.S. Code § 1505—Obstruction of proceedings before departments, agencies, and committees” declares:

Whoever corruptly, or by threats or force, or by any threatening letter or communication influences, obstructs, or impedes or endeavors to influence, obstruct, or impede the due and proper administration of the law under which any pending proceeding is being had before any department or agency of the United States, or the due and proper exercise of the power of inquiry under which any inquiry or investigation is being had by either House, or any committee of either House or any joint committee of the Congress—

Clearly, the riot in the Capitol hindered and delayed the execution of the tally of the Electoral College ballots and caused a wrongful seizure of federal property in violation of these criminal provisions.

It is worth considering what might have occurred if Pence had caved and obeyed Trump’s directive to order the challenged Electoral College ballots returned to their respective states and then declared Trump the winner of the election. Would the January 6th protesters then have been welcomed into the Capitol for a grand celebration, instead of forcing their way in and demanding Pence’s assassination for his disobedience? Since Trump then had two more weeks in the White House until Inauguration Day, would he have declared martial law, called out the National Guard, and had all those who would have protested his subversion of democracy arrested and charged with treason and insurrection? Would we now be engaged in Civil War II? Happily, we will never really know how that would have played out, but the mere thought of it certainly should make us realize how close we came to a coup d’etat.

Unfortunately, notwithstanding Pence’s eleventh-hour decision to defy Trump, present indications are that most Senate Republicans will vote to acquit him. But even if two-thirds of the senators voted to convict him, the struggle against Trumpism and all its stands for must continue, since Trump has unleashed smoldering furies of white supremacism and racism that must be extinguished.