The GameStop saga was more than a simple tale of upstart traders taking on big business. But it highlighted again how disconnected Wall Street is from ordinary workers — and new polling finds that even more Americans now resent Wall Street. 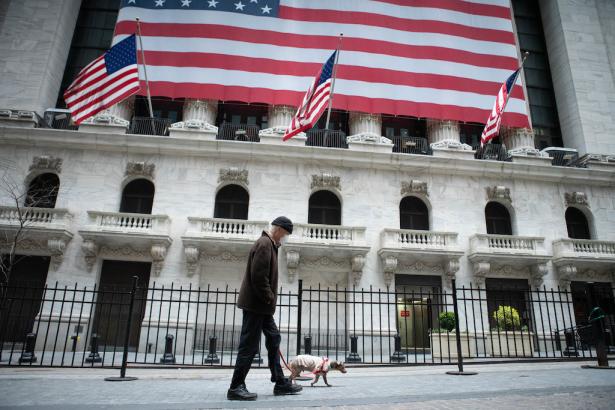 A man walks his dog in front of the New York Stock Exchange in April 2020. , (Anthony Quintano / Flickr)

Afew days ago, as the institutions of Wall Street swatted away rogue stock traders, none other than Ted Cruz decided to try and get in on the action. “Today’s Democrat Party,” declared the Texas Republican, “is the party of Wall Street, Big Tech, and Hollywood and they’ve turned their back on working men and women.”

The remark was a textbook case of conservative pseudo-populism, lumping together economics and culture and failing to resist the inclusion of “Hollywood” in its list of liberal bogeymen. Nonetheless, Cruz, whose wife is a managing director at Goldman Sachs, had clearly detected a whiff of renewed anti–Wall Street sentiment and decided to make the most out of it. Cruz wasn’t exactly wrong, of course: the leadership of the Democratic Party very much enjoys close ties to Wall Street, whose donations to Joe Biden’s recent presidential campaign were several orders of magnitude higher than those made to Donald Trump’s.

Like Cruz, however, Trump is a case in point for why political capture by Wall Street is almost always a bipartisan affair — rhetorical animus toward big finance being markedly different from actually aligning yourself with ordinary people against it. Doing the first certainly helped the ex-president beat Hillary Clinton. But, having run on a pledge to “drain the swamp,” Trump quickly set up camp in the bog of high finance and made it his own.

Cynical and disingenuous as it was, Cruz’s attack on Wall Street was ultimately a phony attempt to capitalize on something all too real: namely, the widespread public antipathy toward Wall Street that appears to have renewed itself in the wake of the GameStop stock fiasco.

The affair is a lot more complicated than a simple tale of upstart traders taking on big business suggests. As labor journalist Edward Ongweso Jr explained in Jacobin last week, several multibillion-dollar companies have profited plenty from the episode.

Nevertheless, a new survey suggests it has become a very real lightning rod for anti–Wall Street sentiment. In her introduction to the study, Morning Consult reporter Claire Williams was unequivocal: “One of the biggest takeaways of the GameStop Corp. market mayhem so far, according to new Morning Consult polling, is that Wall Street remains the public’s top villain.”

Overall, some 64 percent believe “the stock market is rigged against amateur investors in favor of large, professional investors.” Hedge funds — investment pools that were at the center of the recent GameStop drama — received the greatest hostility overall, with half of respondents agreeing they are under-regulated. The figure for Wall Street as a whole, meanwhile, was 45 percent: an increase of 5 percent from a Consult poll conducted in November 2018, which suggests Wall Street elicits even more generalized dislike than big tech, health insurance companies, or big oil.

Though most of the public probably isn’t up on the finer points of the stock market and its sometimes impenetrable machinations, the GameStop affair suggests that millions of Americans correctly recognize Wall Street as an institution apart from the lives of most ordinary people. The ongoing pandemic may be contributing as well — the astonishing boom enjoyed by major corporations and financial firms amid widespread poverty and unemployment highlighting yet again just how severed from the country at large Wall Street prosperity really is.

With Bernie Sanders’s presidential ambitions defeated, the prospect of a concerted political offensive against Wall Street over the next few years is probably slim. But the GameStop controversy, which in a few weeks’ time may well be forgotten, nonetheless underscores the deep resentment held by millions of Americans toward the rigged game of big finance — and the astonishing democratic potential that might still be seized upon by any politician who actually wants to get tough on the gangsters who run the casino.

Luke Savage is a staff writer at Jacobin.