What Trump and the Myanmar Coup Have in Common 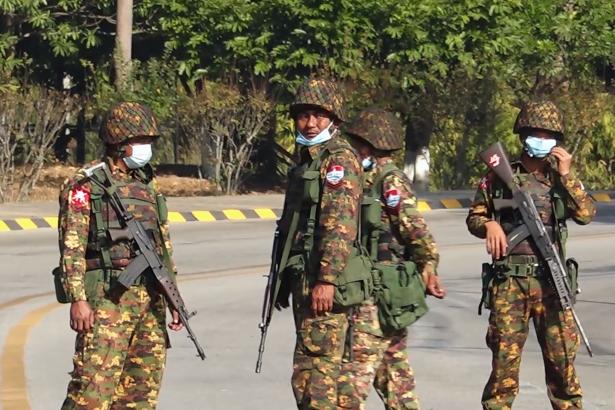 Members of the military in Naypyidaw. The capital was moved to Naypyidaw from Yangon in 2005., Agence France-Presse — Getty Images

This week, military officers in Myanmar overthrew that nation’s democratically elected government after the party it preferred lost the parliamentary elections. The military claimed voter fraud without presenting any proof. It tried to fill the streets with cheering supporters. It shut down some Internet access and all opposition media. People got their news from the government-owned TV stations spewing pro-military propaganda.

I’ve reported from Myanmar and seen the repression firsthand. This could have been the US, if President Donald Trump had had more support from the military for his attempt to stay in power despite losing the election.  Both Trump and Myanmar generals share a similar view about democracy.

Michael Beer, executive director of Nonviolence International, tells me in an interview that the generals in Myanmar “see themselves as overlords” and “look down on democracy and the masses. They saw the dysfunction in the US as a verification of their own need to manage democracy.”

After the 1949 revolution in China, Washington sponsored anti-communist groups in neighboring Burma to disrupt the new, revolutionary government. The Kuomintang,  the nationalists who lost the civil war in China, financed its Burmese operations with heroin sales.

Later, the CIA-owned airline Air America shipped arms to anti-communist militias allied with  Washington during the Vietnam War and, on the return trip, brought back heroin from Burma and Laos.

While the Burmese drug trade was controlled by ethnic groups in the north of the country, Burma’s military benefited from a system of payoffs and corruption, even offering protection to one of the country’s most infamous drug lords. Today, Myanmar is the second-largest producer of heroin in the world after Afghanistan.

I reported from Myanmar in 1995. The military had been in power since 1962 and ran a repressive regime. Meeting with opposition leaders involved safe houses and circuitous routes to make sure I wasn’t followed.

“There is no freedom of association, no free press, no freedom of political activity of any kind,” an underground opposition leader told me for an article for the San Francisco Chronicle.

While I was in the country, the military released Aung San Suu Kyi after six years of house arrest. The Nobel Peace Prize winner was the country’s leading opposition figure. She enjoyed strong backing from London and Washington, and was already favoring neo-liberal, pro-US policies.

Subsequently, Suu Kyi was arrested and released many times. By 2015, she and her National League for Democracy (NLD) had won parliamentary elections. The military still exercised strong influence, however, holding a guaranteed 25 percent of parliament’s seats.

Once in power, Suu Kyi further revealed that she is a Burmese nationalist who opposes rights for the country’s ethnic minorities. She defended the military’s attacks on Rohingya villages, which forced more than 1 million to flee the country.

But she also fought to wrest power from the military. Sometimes the NLD and military  cooperated; sometimes relations blew up. On February 1, troops loyal to General Min Aung Hlaing seized Suu Kyi, along with numerous NLD leaders, and government officials in early morning  raids.

Hlaing was facing forced retirement this summer and all the corrupt riches that come with the job. “He’s accrued enormous wealth,” says peace activist Beer. “Family members get all kinds of special deals.”

For a time, the military was willing to share some power with wealthy business people and the NLD. Ultimately, however, their thirst for power and wealth led them to seize power and to jail their rivals.

If that sounds familiar, it should. Trump had the same motives. Luckily he did not succeed.

The coup that wasn't

Nine days after the November 3 election, Trump’s lawyers told him he lost, and that no amount of electoral or legal challenges would change the results.

But Trump was determined to stay in power by any means necessary. So he accepted the views of other advisors who promulgate outlandish conspiracy theories. For example, Trump’s attorney Rudy Giuliani claimed a computerized vote counting system was programmed to switch Trump votes to Biden. It didn’t. The company that built the machines, Dominion Voting Systems, has sued Giuliani for $1.3 billion.

Former National Security Advisor Michael Flynn proposed a series of blatantly illegal and unconstitutional tactics. He wanted Trump to “temporarily” suspend the Constitution, declare martial law, and have “the military oversee a national re-vote,” and “silence the destructive media.”

Those are the indications that Trump was prepared to toss out the Constitution to stay in power. Here’s my projection of how that could have happened:

Let’s say the Electoral College vote was narrow, with victory hinging on a few thousand votes in swing states. Trump calls on right-wing militias to “safeguard” the vote, which they do by becoming violent.

In response, millions of liberals, progressives and others supporting the Constitution march peacefully. Right wing militias attack the demonstrations and clash with Antifa.

Citing “chaos in the streets,” Trump declares a state of emergency and orders out the National Guard, local police, paramilitary border guards, and whatever other armed security forces that support him. Trump stays in the White House and promises fair elections in 2022.

Trump calls for large rallies of his supporters. Anti-Trumpers do the same. The immediate future of the US then hinges not on the hallowed institutions of “democracy” but on how the Pentagon and other armed forces react to the popular opposition to Trump.

As for Myanmar, there are some signs of resistance. Doctors at a government hospital have gone on strike; residents in some neighborhoods have been protesting the coup by banging on pots and pans. At this time, we don’t know if or how long the coup will last.

But I know this for sure: The people of Myanmar are no more interested in having a military dictatorship than the American people want one controlled by Trump.

Reese Erlich's nationally distributed column, Foreign Correspondent, appears every two weeks. Erlich is an adjunct professor in International Studies at the University of San Francisco. Follow him on Twitter, @ReeseErlich; friend him on Facebook; and visit his webpage.