Both at SEIU and the AFL-CIO, President Sweeney felt a particular responsibility to those workers most exploited, most vulnerable, and historically most ignored or worse by organized labor. In my opinion, this was his most important legacy. 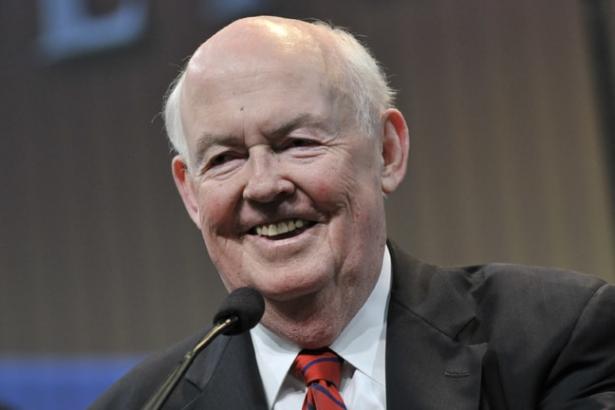 The announcement of John Sweeney’s death last week has sparked an outpouring of tributes and memorials.

I deeply respected and admired John Sweeney. He was as kind and decent a man, not to mention labor leader, as I’ve known. He had a profound impact on my career, and my life. I was incredibly fortunate to have served as his General Counsel for 10 years at SEIU, and then for another 14 at the AFL-CIO. I am forever grateful to have learned from him, and for his genuine friendship.

Others have shared wonderful anecdotes describing John’s humility and lack of self-importance: how when traveling with staff he would offer to carry their bags and drive them home; how when hosting visitors in his office for meetings he would offer to bring them the coffee; and how when he asked about  your spouse, your kids, or your parents, he wasn’t just being polite, he truly cared – and then  remembered what you told him.

Much has been written in the obituaries and memorials about the key role that John Sweeney played as a transitional leader at a time that the labor movement was not only numerically in decline, but, more concerning, was becoming increasingly irrelevant to those it was intended to serve.

One theme alluded to in some tributes, but not discussed in any depth, was the highly significant role that Sweeney played in broadening the labor movement — starting with his recognition that organized labor had a responsibility to be a voice for all workers, not only those already enjoying collective bargaining rights. Both at SEIU and the AFL-CIO, President Sweeney felt a particular responsibility to those workers most exploited, most vulnerable, and historically most ignored or worse by organized labor. In my opinion, this was his most important legacy.

In the 1980’s and 90’s, as employer resistance to unionization hardened, and as globalization and new technology further impacted union jobs, many unions focused primarily on holding onto their current memberships. As President of SEIU, John Sweeney took the longer view. He recognized both the moral imperative and the practical necessity of reaching out to workers traditionally left out by organized labor. And he prioritized this mission in his strategic use of the bully pulpit  and in his programmatic priorities.

What made Sweeney so effective at this was his personal style in offering a bridge and a  welcome mat to outside groups — immigrant rights, civil rights, worker centers, religious organizations, students, and others. And every bit as importantly, he welcomed the individual workers, themselves.

At SEIU, the Justice for Janitors campaigns that John Sweeney led are rightly recognized for what at the time were innovative and courageous organizing strategies and tactics. However, just as meaningful was his embrace of the new populations of largely Latino, undocumented janitors who, in many cities, had replaced the ethnic Irish, Polish, and other cleaners who had previously cleaned the same buildings.

He invested significantly, against the odds, in major organizing campaigns on behalf of low-income Black and Latina home health care workers. As his first highly visible organizing initiative at the AFL-CIO, he placed the Federation’s support and resources behind the United Farm Workers’ campaign on behalf of 20,000 California strawberry workers who were seeking clean drinking water, an end to sexual harassment, and a living wage.

At the AFL-CIO, his open arms extended to the fledgling worker center movement — a small but rapidly growing network of community-based worker rights organizations that had no collective bargaining relationships with employers but faced many of the same employment-related issues confronting organized labor: wage theft, rampant health and safety violations, misclassification of employment status, immigrant exploitation,  and others. This outreach was made possible after he paved the way with a major policy course correction on immigration, at an AFL-CIO 2001 Executive Council meeting.

In 2006, relying heavily on a series of conferences and reports undertaken by the AFL-CIO’s union lawyers network (LCC), Sweeney guided a highly controversial Statement through the AFL-CIO Executive Council allowing local worker centers to affiliate with state and local AFL-CIO bodies where mutually desired. To date, some 30-40 have taken this step, and many more have undertaken informal collaboration on a variety of issues. At the same Council meeting, he announced a partnership agreement with the National Day Laborers Organizing Network (NDLON), which became a model for agreements with several other networks of workers who had been excluded from the organized labor movement — the National Domestic Workers Alliance and Interfaith Workers Justice, among others. These partnerships provided a basis for the Federation and many affiliates — especially at the state and local levels — to work collaboratively in a variety of ways.

And when 10,000 unorganized, highly exploited car wash workers in Los Angeles expressed an interest in exploring a novel, hybrid union/worker center organizing model, John Sweeney helped bring an AFL-CIO affiliate (the Steelworkers) into the effort, lent numerous staff of his own to the campaign, and provided far more funding than many of his more traditional affiliates thought was justified.

Underlying these institutional arrangements, it was always John Sweeney’s personal style that convinced the workers and their respective organizations that organized labor was genuinely interested in their involvement in an all-inclusive movement. Sweeney did not simply give speeches at Domestic Workers’ meetings, he  came early and stayed late to talk to the individual women housekeepers. He didn’t simply sign the national worker center agreements, he checked in regularly with his counterpart worker center leaders to make sure his own staff was following up on commitments of collaboration.

It was no coincidence that one of AFL-CIO President Sweeney’s first initiatives after taking  office at the Federation was the America Needs a Raise Campaign — a major, nationwide organizing, political, and legislative initiative aimed at raising the wage and living standards floor for all U.S. workers — even when some national unions still took the position that raising wages and benefits for non-union workers would disincentivize their desire to join a union.

President Sweeney’s commitment to marginalized groups of workers extended to women workers as well. At SEIU one of the four major divisions he established focused on clerical workers, and he affiliated the national Nine to Five working women’s organization, bringing them in as SEIU District 925, which became a front line working women’s organizing operation.

John Sweeney was the embodiment of leadership that brought out the best in the people he represented, the partners and allies he recruited, and the staff who worked for him.  No loyalty oaths were necessary or expected from those working for John.  We knew that he was always fighting for the ultimate cause — for all workers to have a meaningful voice at work, along with the dignity and respect they deserved. We felt privileged to be part of that cause. We were inspired by him to do the best we each could do to further the cause.

John Sweeney has passed, but the cause he championed endures. And the lessons that we hopefully learned from his example as a labor leader, a teacher, and most fundamentally as a human being,  will continue to honor his memory.

Jon Hiatt is of counsel to Solidarity Center's International Lawyers Assisting Workers (ILAW) Network, and a visiting scholar at the Berkeley Labor Center.