The violence committed by NYPD against peaceful Black Lives Matter protesters on June 4 was not an isolated incident. It was just the most recent and egregious example of the normal, regular, everyday state-sanctioned terror we endure here in the so 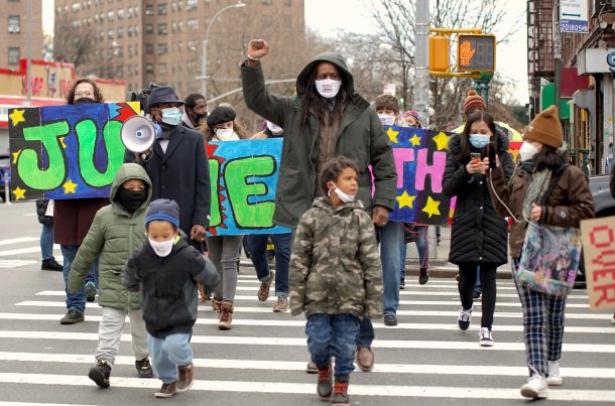 In contrast to January 6 in Washington, DC, police in New York on Martin Luther King Jr. Day reverted to type. At least 29 people were arrested and multiple protesters were hospitalized when NYPD broke up a Black Lives Matter march held in honor of MLK Day, the Gothamist reported. As marchers streamed off the Brooklyn Bridge, cops pushed a metal barricade into Emily Hagan’s face, then crushed her hand with a baton. Tameer Peak told Gothamist he wasa punched in the face by a cop while he was trying to film arrests.

When Peak fell to the ground, he said, an officer kicked him in the head, then arrested him. At the 7th Precinct station, Peak began vomiting, but got no treatment. He was released at 4:30 a.m., with a desk appearance ticket for “obstructing governmental administration.”

The week before MLK Day, New York Attorney General Letitia James sued the NYPD, pointing to “blatant use of excessive force and misconduct, including indiscriminate and unjustified use of batons, bicycles, pepper spray and a crowd control tactic known as kettling” ‒ actions defended by Mayor de Blasio and NYPD leadership. The suit accuses NYPD of violating the civil rights of New Yorkers who marched against racist police violence.

The day before MLK Day, in the Mott Haven neighborhood in the south Bronx – the poorest section of the poorest urban county in the United States – Mott Haven Families and their supporters gathered on the corner of 136th Street and Brook Avenue to commemorate a police riot last June 4 at that location.

The press conference, march, and rally were the culmination of continuous weekly protest vigils since the June 4 police riot, when 263 people were brutalized, arrested, jailed and held overnight and into the next day without food or water. Mott Haven Families issued an open letter to Mayor Bill de Blasio, Police Commissioner Dermot Shea and two other top police officials, as well as south Bronx city council members. “We charge the NYPD and our local elected leaders,” the letter says, “with having profoundly failed the people of Mott Haven… by engaging in horrific acts of brutality and lawless behavior. Our elected leaders have failed us by permitting such actions and not pursuing any accountability.”

Mott Haven Families leader Jason Epting said Mott Haven’s 40th police precinct leads all 77 New York precincts in complaints of violence. “With the help of top officials and local politicians, they decided to kettle and physically assault protesters. They never thought that anyone would really care. . . .  But they’re wrong – we’re too strong and too powerful!”

The NYPD has more armed personnel, at 36,000, than Canada’s armed forces, with 23,000, and is more heavily armed, thanks to lavish equipment sharing by the Pentagon.

Yajaira Saavedra, who was violently arrested a year earlier while working at her family’s La Morada restaurant and refugee center in Mott Haven, said “the same racism that separates undocumented families is the same racism that killed George Floyd. She denounced the presence of ICE personnel mixed in with NYPD forces on June 4. She called for the NYC City Council to stop plans for a new multi-million dollar police center in Mott Haven. She also called for the police to be abolished and the money re-directed for community projects, adding “reparations are long overdue!”

Richie Merino, a Mott Haven Families organizer and DSAer who grew up in Mott Haven, told the crowd of a traumatic incident in his childhood when his mother disputed a double-parking ticket and was grabbed, arrested and jailed overnight by a Mott Haven cop. “Oppression and abuse of power by cops against our neighbors here in Mott Haven has been an issue my entire life. The violence committed by NYPD against peaceful Black Lives Matter protesters on June 4 was not an isolated incident. It was just the most recent and egregious example of the normal, regular, everyday state-sanctioned terror we endure here in the south Bronx.

“When white supremacists get friendly escorts in and out of the capitol by police, but Black and brown protesters get assaulted by police for exercising the constitutional right to protest, we call that fascism! So we’re here to say enough is enough.”

How to contain the police?

A new interfaith coalition of NYC clergy and spiritual leaders – the Police Reform Organizing Project – was announced during MLK week, led by more than two dozen NYC religious leaders of all faiths. The coalition “came together to speak out against abusive NYPD practices and to emphasize the importance of spiritual leaders reaching across religious and other divides to work together to achieve sweeping police reform.” NYC DSA’s Religion and Socialism Working Group is involved in the project.

DSA’s #DefundNYPD campaign is working with grassroots organizations and other campaigns across NYC to demand the city government cut the NYPD budget and police force by 50%, and directly invest that money into the social services and workforce that keep NYC safe. Meanwhile, Mayor de Blasio proposes to add $6.5 million to the NYPD budget, plus another $36 million for prisons. Our work is cut out for us!

Also during MLK week, northeast of Mott Haven, DSAers flocked to the Hunts Point Produce market to support striking Teamsters fighting for a raise of a dollar an hour. On Tuesday night, January 19, cops moved to break up the picket line as strikers tried to stop a delivery. Strikers and supporters held the line. The next night AOC joined the fight. “When you’re standing on this line,” she said, “you’re not just asking for $1, you are asking for transformational change for your lives, over the lives of every food worker across this country.” NYC DSA organized mutual aid food deliveries to the strikers, from the La Morada kitchen, as well as a strike fund. By the end of the week, the Hunts Point Teamsters had won! The company “blinked,” offering a 70-cents-per-hour raise plus improved health benefits. The membership voted Saturday morning to accept.

The message is the same as always: an injury to one is an injury to all, and if we organize to fight back, we can win. 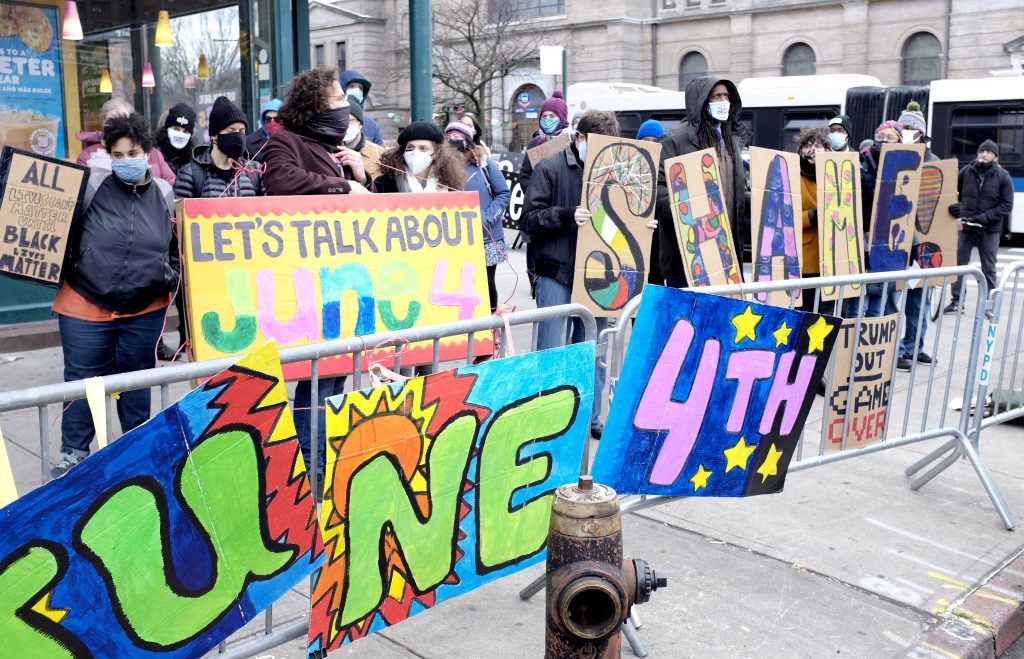