labor Why District Attorneys Should Take Up Wage Theft Criminalization

Prosecutors can and should take immediate steps to redirect efforts toward wage theft. This would give momentum to movements calling to redirect resources that now go to funding the police. 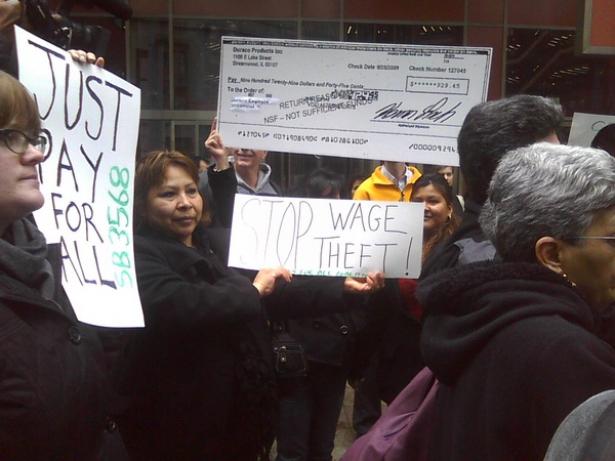 Chicago Workers Collaborative supporters rally for a bill on wage theft in Chicago.,Flickr

Studies show that employers steal billions each year from their employees, most often by failing to pay the minimum wage or overtime. Wage theft figures from the ten largest states alone reach $8 billion, a figure nearly half as large as all other forms of property theft nationwide.

While wage theft is typically addressed through civil suits forcing employers to provide back pay, local and state prosecutors have increasingly pursued criminal sanctions against employers.  For instance, in January the Philadelphia District Attorney’s Office’s Worker Protection Unit brought criminal charges in its first labor case, charging a plumbing contractor with stealing $110,000 that belonged to 37 employees and their union. In the long term we should address wage theft through increased civil enforcement, and could help fund such efforts by shifting resources away from police departments. But in the meantime these priority shifts in criminal prosecution are necessary, and they can both help deter employer misconduct as well as provide an alternative vision of public safety.

The launch of Philadelphia’s Worker Protection Unit was part of a trend of local and stateprosecutors targeting employer misconduct. The Manhattan District Attorney Cyrus Vance Jr. made a similar commitment to fighting wage theft, and several candidates vying to replace him have promised to continue that work. District attorneys covering major cities—like San Francisco, Austin, and Minneapolis—have undertaken similar initiatives.

Concurrently, progressive state Attorneys General have increasingly used their criminal as well as their civil enforcement powers to target employers. An August 2020 report by Terri Gerstein highlighted that between 2018 and 2020 nine states brought criminal charges in labor rights cases—sometimes marking the first such charges brought by a state’s AG.

Increased local and state criminal as well as civil enforcement has been born of necessity. Recent estimates indicate that more than half of private-sector nonunion employees are subject to arbitration clauses, with more than four in ten of those workers also having waived their right to be a part of a class action. Without the powerful deterrent effect of class action lawsuits, government enforcement efforts become central to deterring employer misconduct. States and localities stepped up during the Trump Administration, as federal labor enforcement was missing in action.

But if the problem is under-enforcement of wage theft, should prosecutors be increasingly involved? Ben Levin has previously argued on this blog and elsewhere that we should not criminalize wage theft, because civil remedies are sufficient, because criminalization is unlikely to have additional deterrent effect, and because criminalization serves only to bolster the carceral state, while progressives should seek to dismantle it.

This debate has renewed importance in light of increasing calls to defund the police: we need long-term strategies that both increase wage theft enforcement and radically transform our system of policing.

As it stands, cities devote few resources to labor enforcement—civil and criminal—compared to policing. In the aftermath of George Floyd’s murder this summer, Centro de Trabajadores Unidos en la Lucha, a worker center in Minneapolis, emphasized that it had previously pushed the city to defund the police and hire wage theft inspectors instead. While Minneapolis has more than 800 police officers, as of March 2020 there were four labor investigators responsible for enforcing the city’s labor standards for about 10,000 employers and 100,000 workers.

We should redirect a significant portion of the funds that currently go to police departments toward local, civil wage theft enforcement. The racial justice possibilities are self-evident. Wage theft targets marginalized groups: people of color, immigrants, women, and young workers are more likely to report being paid less than the minimum wage. Our current system of policing, on the other hand, disproportionately targets and criminalizes Black and Brown individuals.

Unfortunately, police appear willing to resist reform, and even city councils that have committed in word to redirecting resources away from police departments are struggling to change their ways. What can be done tomorrow in cities where calls to adequately fund wage theft enforcement still face opposition?

In the short term, although prosecutors do not have authority to write city budgets, they do have powerful discretion in shaping criminal justice. Simply launching a unit, prosecuting several high profile cases, and instructing police on what to do if a worker does file a complaint could help to reshape our notion of public safety. The relationship between prosecutors and police is to some extent symbiotic. For example, perhaps in response to the election of DA José Garza, who intends to target employers, the Travis County Sheriff’s office now includes on their website a link to report wage theft.

While the practical impacts of criminal wage theft remain understudied, threats of criminal sanctions may have a particularly powerful deterrent effect—more significant than in other areas of criminal law. Though there has been no study on wage theft criminalization and deterrence, one study found that when press releases detailing large OSHA fines were sent to local media, compliance by other nearby facilities improved more than if OSHA had inspected those facilities directly. Similar news coverage of blockbuster criminal charges—as just occurred in Philadelphia—might have the same impact.

More important, treating wage theft as a crime and targeting it seriously would be an important symbolic act. As some calling to defund the police have pointed out, what constitutes a “crime” is often divorced from what actually causes harm. Naming and shaming wage theft as “criminal” recasts the meaning of “law and order,” signaling that the harm done by employers is greater than the harm committed by, say, drug infractions, or similar acts that we should de-criminalize. Any involvement of police officers in investigative phases might also help to reimagine law enforcement officers not as militarized wielders of force but as inspectors and mediators. In other words prosecutors can help give some substance to what it means to transform policing.

Lastly, judges rarely impose jail time for wage theft. They need not do so, moreover, as research suggests it is the fact of criminal liability, not the extent, that may have a deterrent effect. The same discretion that permits district attorneys to shift focus to wage theft would allow them to favor back pay and fines over jail time.

This is not to say progressive prosecution can be a long-term solution to racial injustice. There are reasons to fear over-involving the criminal justice system in wage theft enforcement. Perhaps law enforcement would disproportionately target Black- or immigrant-owned businesses. Or perhaps police-turned-labor-investigators would have conflicts not typical of civil enforcement agencies: imagine that undocumented workers call on law enforcement, only to have the officers later report those workers to Immigration and Customs Enforcement.

But the crisis of wage theft under-enforcement exists now. If city councils do not act, prosecutors can and should take immediate steps to redirect efforts toward wage theft. This not only may deter employer misconduct, but also helps to reimagine the role of prosecutors and police and gives momentum to movements calling to redirect resources that now go to funding the police. If this is an improvement on the status quo, however, it is no panacea. Movements must continue demanding that we move dollars out of police departments and into civil wage theft enforcement.