books The Dead Are Arising—The Life of Malcolm X

This award-winning biography mines some hitherto untapped sources, including extensive interviews with members of Malcolm X's immediate family, to present the fullest picture yet of the famed Black Liberation Movement leader. 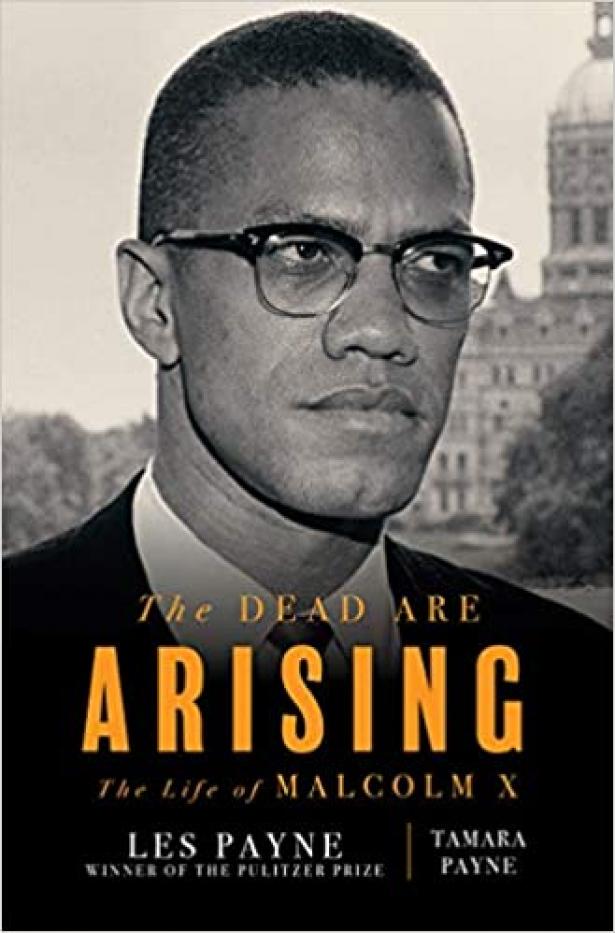 It was pure serendipity.

Each spring at City College of New York for 15 years, I have taught a course on the life and legacy of Malcolm X. As part of introducing the great leader to my students, I mix the course with invited guests, classroom lectures and audiovisual presentations. At least half of the time I take them on tours of Sugar Hill in Harlem and they can see where Malcolm lived, worked, hustled, was eulogized, and accumulated his iconic leadership. On one Saturday we met at the Tsion Café, a place where Malcolm once worked with Redd Foxx, in fact they were two reds—one from Detroit and the other from Chicago.

The class was just getting underway when I spotted Les Payne trekking up St. Nicholas on one of his leisurely walks around the community. I informed him of the class and asked if he could come and share a few minutes with my students about his research on Malcolm X. For more than a quarter century we had discussed Malcolm, most publicly as panelists on Gil Noble’s “Like It Is” on ABC-TV on Sunday afternoons. Without missing a beat he said he would gladly do it and hurried off to his home up the street to fetch a chapter of his book to share with us.

Since we were at the place once called Jimmy’s Chicken Shack, I asked Les, if possible, to share with us his chapter where Foxx is discussed. He returned promptly and unfolded the pages and read in that soft baritone that I had heard so many times seated near him in the studio. The students were mesmerized and hit him with a deluge of questions after he finished. This was my introduction to the book that would become “The Dead Are Arising” and eventually be the recipient of the National Book Award in 2020 in the nonfiction category.

In our many discussions about Malcolm and the project I had some clue of his approach and was informed that it would be like no other biography or commentary on Malcolm’s life. He only hinted at the direction he was going to take, what angle he would devise in examining a man he deeply admired, and one in which had not been trammeled to oblivion. Knowing his journalistic acumen, I had a feeling it would consist mainly of his own interviews and research, demurring the works of others, particularly the more recent, controversial ones.

On several occasions while waiting in the Green Room at the television station, he would divulge bits and pieces as he exchanged memories with Noble, me and Milton Allimadi, the other panelist. These were opportunities to have him regale us on what it took to earn him a Pulitzer Prize, and his role in the founding of the National Association of Black Journalists. I believe he used his influence to get me inducted into the organization’s Hall of Fame. That subject was broached to some extent over drinks at the NABJ annual convention in New Orleans that he attended in 2017 with his son Jamal. Once more we shared our Alabama roots—he was born in Tuscaloosa and I was born in Birmingham. Our conversation was repeatedly interrupted by dignitaries seeking a word or two with him. But the several Green Room chats with its relative privacy were the most rewarding, and even then it was nothing more than tantalizing teases, fresh perspectives he promised on Malcolm, especially his early years, his family life and his assassination, subjects that he felt had been given short shrift. One of the last times we had to chat was during a casual walk down St. Nicholas, and the banter then was on the Obama legacy, and few were informed as he was on the nation’s political machinations, particularly the Trump regime. I asked him how the book was progressing and he said he was just about there, and putting some finishing touches on it.

Those finishing touches and much of the earlier process is a magnificent achievement. When I heard the news that he had joined the ancestors on March 19, 2018, I was stunned and suddenly, like Manning Marable and Malcolm himself, he would not be around to deal with the celebration nor to respond to those who might question his conclusions. His daughter, Tamara, who worked with him all along on the project, summed it all up when she said her father not being able to experience the exultation was “bittersweet.”

Tamara was more than qualified to place the last period in the book. As she notes in the book’s introduction among her many tasks were to track down informants, and later transcribe the interviews for her father’s use. “Meeting Malcolm’s associates and family members over the years and watching Les Payne’s investigative techniques at work have been a unique reward of a lifetime for me,” she wrote. “My many discussions with him about how this work was taking shape proved to be invaluable in the finishing of the manuscript. As the co-pilot and co-navigator, I could confidently and successfully complete this part of the journey.”

Fortunately, most of the 600-page “journey” was complete, and only needed Tamara and other editors to ready it for production. This was a prodigious undertaking and Les went about it dutifully, painstakingly rounding up the coterie of folks—none more indispensable as Malcolm’s brothers, Wilfred and Philbert—whose recollections are vividly recounted from chapter to chapter. Wilfred, Malcolm’s eldest brother, shared family information with Les—an eight hour long interview—that is at the crux of the book’s early chapters, much of it heretofore never revealed. Readers are given day-to-day details of Malcolm’s family, its lineage, the spirited interaction between the siblings, their father’s death, and the later initialization of the mother that ruptured them forever.

Les is almost surgical in this retelling and in his chapter “The Anchor is Lost,” he offers a grim summary of the terror and tribulation the family endured. “Down through the ensuring generations, the Little family would appear to be haunted by the specter of death and disaster: home fires, prison, manslaughter, and arson, combined with race terror, feuding, mental breakdowns, even murder,” he recounted. “It was as if some curse of Shakespearean proportion had befallen this American family of pioneers out on the Great Plains—and most especially young Malcolm and his offspring down through the decades.”

From Omaha, where Malcolm was born May 19, 1925, to Milwaukee and to several locations in Michigan, Les charts the movement of the Little family, and his research not only complements Malcolm’s autobiography but expands and corrects episodes, with a deeper dive into the social and political landscape that stifled the Littles and other Black Americans struggling against racism, bigotry and discrimination. In doing this, there are extensive riffs and sometimes Les devotes far too much time to a particular tangent, so much so that Malcolm’s narrative is subsumed. An example of this occurs in his summary on the history of the Ku Klux Klan, which while rewarding goes on much too long, and even then without noting the actual circumstances that led the unmentioned Nathan Bedford Forest to founding it. An additional quibble—and that essentially is what they are—occurs in his discussion of the early years of the Nation of Islam in Detroit. Les cites John Muhammad, Elijah’s brother, but the pivotal person in the creation of the group was John’s wife Burnsteen Sharrieff Muhammed, who still awaits a full exposition of her crucial secretarial and organizational skills. There are a few other errors of fact that will surely be corrected in the paperback version, but they are minor compared to the major sweeping, almost epic majesty that Les accomplishes.

Les devotes quite a bit of space to Hartford, Connecticut that includes his own coming of age there and the establishment of the NOI mosque in the city. This is one of the longest and most insightful interviews that contextualizes Malcolm’s genius, Les’ vision, and the recall of a mosque member. At this moment the hallmark of Les’ process, literary style and historical perspective is fully displayed. It is here, too, that the book’s title is graphically explained. The chapter on Hartford closes with Malcolm’s letter to Elijah in 1956, proudly proclaiming “The East Coast has many rough spots (due to the newness of the Muslims). But overall the dead there are rising.”

Along with an epilogue, the book has a folios of photos, a full account of Malcolm’s assassination and a few revelations, as well as an appendix with Malcolm’s responses to a questionnaire supplied by the Islamic Centre of Geneva, Switzerland.

Some dyed-in-the-wool Malcolmites are sure to wish he had done more on the last year of his life, in which his political maturation was reaching a pinnacle, and perhaps more on some of the latest developments and debates surrounding Malcolm’s short but eventful life, including the CIA’s involvement. But those concerns would entail another volume, and that, lamentably, cannot be done by Les. He has made his monumental contribution to Malcolm’s canon and as he often joked with me, what more can they expect “from two Black boys from Alabama.”

Herb Boyd is a journalist, educator, author, and activist. His articles appear regularly in the New York Amsterdam News. He teaches black studies at the City College of New York and the College of New Rochelle