Democrats want to pay billions to put Americans on expensive corporate health insurance plans rather than expand Medicare or create a public option. It’s a gift to a criminal private insurance industry that needs to be completely abolished. 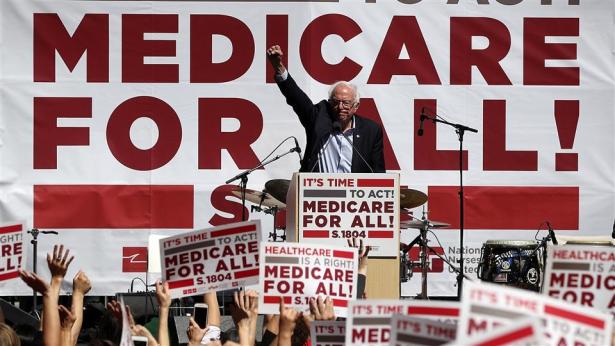 Bernie Sanders at a Medicare for All Rally., wsj.com

Propping up the corporate health insurance industry isn’t cheap or painless, but for Democrats in Washington, it’s the only way.

Instead of enacting a universal Medicare for All health care system that would save the United States and its citizens hundreds of billions of dollars annually, temporarily expanding Medicare, or championing a promised “public option,” Democrats are rallying behind a health care proposal that will funnel tens of billions of dollars to corporate health insurance companies, even as they are already experiencing record profits and jacking up premiums, while continuing to deny claims.

Democrats’ current plan will lower people’s premiums, but only on a temporary basis. It will also not stop insurers from passing on huge out-of-pocket costs to enrollees if they need medical care, nor does it improve the quality of people’s health insurance. Indeed, it will push people onto state exchanges, where one in six in-network medical claims were denied in 2019.

The proposal would be a boon for the health insurance industry, which has specifically lobbied for the new subsidies. Health insurers have already seen their profits skyrocket during the COVID-19 pandemic, since people have avoided going to the doctor, which means insurance companies are paying less to providers while collecting the same amount of premiums.

House Democrats’ COVID-19 relief legislation, modeled on President Joe Biden’s “American Rescue Plan,” would increase subsidies available to people buying health insurance on the Affordable Care Act (ACA) marketplace and greatly expand who’s eligible for subsidized coverage. Americans who don’t qualify for any premium tax credit today because they earn more than $51,040 (or $104,800 for families of four) would see their premiums capped at 8.5 percent of their income.

The House language would also provide premium subsidies to Americans collecting unemployment, and it would subsidize 85 percent of the cost of COBRA coverage to help people who were laid off during the pandemic keep their employer-sponsored insurance plans. Labor unions want to see COBRA subsidized at 100 percent, as Biden’s plan called for.

The proposed COBRA subsidies only run through September, while the ACA tax credit expansion lasts through the end of 2022, so the relief may only be temporary. Still, these measures will cost more than $52 billion, according to the Joint Committee on Taxation.

The Congressional Budget Office projects 1.3 million new people will gain insurance coverage under these provisions, meaning that millions of Americans will remain uninsured during a historic, deadly pandemic. There were nearly 29 million uninsured people in the United States in 2019, before COVID caused widespread job losses.

The short-term nature of the subsidy measures ensures lawmakers have to come together in the future to renew them so that people don’t experience extra pain down the line — a tricky prospect, given that Republicans have spent much of the past decade working to repeal the ACA.

Health insurance coverage purchased through the ACA marketplace costs 83 percent more than Medicaid coverage and leaves patients with ten times the amount of out-of-pocket costs, according to a study published last month in the Journal of the American Medical Association.

The researchers found that ACA marketplace plans cost significantly more than Medicaid because private insurers pay “higher prices for the same services.” Research from RAND Corporation shows that hospitals often charge people with employer health insurance plans two or three times as much as Medicare or Medicaid will pay.

The deductibles associated with private insurance plans are so steep that many Americans who have insurance often can’t afford to go to the doctor.

The average bronze plan deductible on the ACA marketplace was nearly $5,900 in 2019. While poorer enrollees may qualify for cost-sharing reductions limiting their out-of-pocket expenses, the reduced out-of-pocket maximums that individuals are expected to pay range from $2,850 to $6,800, depending on their income level.

Meanwhile, insurance companies are denying 17 percent of in-network health claims made by patients on ACA plans.

The new ACA subsidies wouldn’t affect people living in poverty in states where Republican politicians have refused to expand Medicaid, as those Americans are not eligible for the ACA marketplace plans. House Democrats’ legislation would offer those holdout states more federal funding to expand Medicaid, but it’s unlikely Republicans will suddenly decide to take their boots off their constituents’ necks.

The new COVID bill will pay part of some Americans’ premiums. Overall, it will do very little to lower the country’s health care costs, which are the highest in the world, as insurance companies enjoy outsize profits thanks to a pandemic. The government will just pick up the tab for a bit more of those costs. People will still face big out-of-pocket costs if they get sick. Insurance companies will continue denying claims.

On the other hand, according to the Congressional Budget Office, Medicare for All legislation in Congress could ultimately save $650 billion annually, while covering all Americans and ensuring they no longer have to worry about expensive deductibles or co-pays or narrow insurance networks that act as barriers to care.

Instead of propping up health insurers, Democrats could pass existing legislation to enact an emergency Medicare for All program, or Biden could try to use executive authority granted to him under emergency provisions in the ACA to expand Medicare during the COVID-19 pandemic.

Or they could be discussing the creation of a public health insurance option, which Biden campaigned on as an alternative to the Medicare for All plan favored by Senator Bernie Sanders.

“Closest Match to the Biden Campaign”

“We think what we’re introducing is the closest match to the Biden campaign,” Kaine said, according to NBC News.

After the primary, a Biden-Sanders joint task force negotiated a more robust public option pledge than what the Biden campaign had been promising, and the Democratic National Committee platform included a similar measure.

The public option will provide at least one plan choice without deductibles, will be administered by the traditional Medicare program, not private companies, and will cover all primary care without any co-payments and control costs for other treatments by negotiating prices with doctors and hospitals, just like Medicare does on behalf of older people.

The Democratic National Committee’s 2020 platform said: “Democrats will also make available on the marketplace a public option administered through the Centers for Medicare and Medicaid Services (CMS) which includes a platinum-level choice, with low fees and no deductibles.”

The Bennet-Kaine legislation includes no mention of deductibles, and initially, only people living in areas with limited insurance options would be allowed to sign up for their public option. The program would open up to all Americans by 2025.

While the public option proposal is more scaled back than the party promised, it probably won’t be enacted into law anytime soon, either.

Senate Democrats haven’t committed to ending the legislative filibuster, which means they will need to use the budget reconciliation process to pass legislation with fifty-one votes, instead of the sixty votes they will likely need to break a Republican filibuster.

It’s hard to imagine any Republicans supporting a public option plan, no matter how watered down it gets, so Democrats would likely need to pass such a plan using reconciliation.

Congress typically only uses the budget reconciliation process once per year, though Democrats can use it at least twice this year, because Congress didn’t pass a budget last year. Democrats are using reconciliation now to pass Biden’s first COVID relief bill.

Sanders, the new Senate budget committee chairman, appears ready to use reconciliation more frequently — which could at least remove a process roadblock to enacting big bills during an economic emergency.

Still, the Bennet-Kaine public option plan could sit for some time if it’s not in the current aid bill. Expect Democrats to say they are fine-tuning the legislation and gathering stakeholder input, while the health care industry unleashes a propaganda campaign to kill it.

Between 2009 and 2010, a powerful health insurance lobby, America’s Health Insurance Plans (AHIP), secretly funneled more than $100 million to the US Chamber of Commerce to pay for an advocacy campaign to destroy support for the public option route. It worked: Democrats removed the public option from the ACA, which is why politicians are now talking about it as a potential compromise measure a decade later.

An AHIP-led front group called the Partnership for America’s Health Care Future, which spent $4.5 million on ads opposing Medicare for All last year during the Democratic presidential primary campaign, has already signaled its opposition to the scaled-down public option proposal.

“The Partnership for America’s Health Care Future believes that every American deserves access to affordable, high-quality health coverage and care, and the best way to achieve this is to strengthen our current system — not start over by creating unaffordable, one-size-fits-all government health insurance systems like Medicare-X,” the group said in a statement last week.

According to Federal Communications Commission records, the partnership recently reserved TV spots in Montana and Maine, where Democrats would need yes votes from senators Jon Tester and Angus King for a public option, as well as in the Washington area.

It’s easy to see the public option languishing, as health insurers use their excess profits to pulverize the plan.

In the meantime, Democrats will have the government deliver more money to the corporate health insurance industry to put more Americans on insurance plans they can’t afford to use.

Andrew Perez is a writer and researcher living in Maine.