“So if that $15 minimum wage isn’t in this package, we are going to have to figure out a way to get it through. And if that means reforming the filibuster, then we should reform the filibuster," Rep. Pramila Jayapal said. 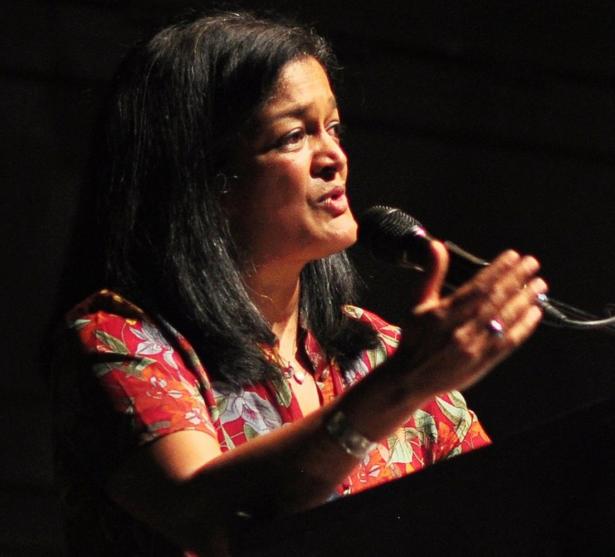 Progressives are willing to accept defeat on the minimum wage for now and vote for President Joe Biden’s coronavirus relief package. But they're channeling their energy into a renewed push to kill the filibuster.

One day after the Senate parliamentarian effectively forced a $15 minimum wage hike out of Democrats' coronavirus relief package, leading liberal activists are racing to turn their bitter setback into opportunity. The need to sacrifice a key Biden priority in order to ensure the Covid aid bill can pass the Senate with a simple majority has handed progressive lawmakers and their allied groups a new talking point in their long-running quest to eliminate the legislative filibuster.

We promised a $15 minimum wage,” said Rep. Pramila Jayapal (D-Wash.), chair of the Congressional Progressive Caucus. “So if that $15 minimum wage isn’t in this package, we are going to have to figure out a way to get it through. And if that means reforming the filibuster, then we should reform the filibuster.”

Democrats pushed hard to raise the minimum wage as part of the pandemic relief measure, which the Senate can pass with just 51 votes thanks to the protections of the arcane budget reconciliation process. But now that the chamber's parliamentarian has ruled out adding the wage hike to the coronavirus bill, progressives see nuking the filibuster outright as their best — and perhaps only — chance of getting to $15 an hour.

Very few Senate Democrats believe that the left's demands to toss the chamber’s 60-vote threshold will have any effect on the dynamic in their 50-member caucus, where there's currently not enough support for eliminating the filibuster. Still, pressure from progressives on and off the Hill — who turned the filibuster into a wedge issue during the Democratic presidential primary — is rapidly intensifying in only the second month of Biden’s tenure.

With Democrats preparing to take up other high-priority legislation, including a landmark voting rights bill and police reform, liberals' clamor to end the filibuster is bound to cause new political headaches for party leaders.

Thursday night's setback on the minimum wage is the first of many potential stressors to come as Democrats rethink the future of the legislative filibuster. Few of the party's major policy priorities stand a real chance of passing the Senate without eliminating the tool that requires a 60-vote margin of approval for most measures.

"It's going to take a few more issues that get momentarily frustrated for it to fully come to a head but we're getting closer by the day," said Brian Fallon, executive director of the liberal group Demand Justice.

Exactly which agenda item might constitute the Democratic breaking point is unclear, as the party pushes for a voting rights expansion, immigration reform and more.

Former Senate Democratic leader Harry Reid of Nevada ended the filibuster for executive-branch and some judicial nominees in 2013, a move known as the "nuclear option," and current GOP leader Mitch McConnell of Kentucky continued down the path in 2017 by ending the filibuster for Supreme Court nominees.

"It may be that you have to demonstrate for the American people how grave a challenge it is to get major change done that affects their lives when you've got the blockade that the filibuster allows," said Sen Bob Casey (D-Pa.), noting that he and other Senate Democrats who wouldn't have supported ending the filibuster "are much more open to it" now.Biden has consistently resisted calls to go nuclear and his press secretary reiterated that position after he took office. But he's now confronting an aligned array of progressives in the House, Senate and outside advocacy groups newly emboldened to agitate against what they consider an arcane rule that’s a relic of the Jim Crow-era.

“The filibuster was never in the constitution, originated mostly by accident, and has historically been used to block civil rights,” tweeted Sen. Brian Schatz (D-Hawaii) shortly after the Senate parliamentarian’s ruling. “It’s time to trash the Jim Crow filibuster.”

Schatz acknowledged in an interview Friday that Democrats currently “don’t have the votes to get rid of the filibuster,” but said the party can’t just throw up its hands and accept gridlock. “This is a monumental change, this is a necessary change,” he said.

Failing to fulfill the party’s promise of passing a $15 minimum wage could have dire consequences for Democrats at the ballot box, progressive lawmakers argue. Biden campaigned on increasing the hourly wage for the first time in a decade. The issue is also a longtime priority for key Democratic constituencies, including labor unions.

The pressure is particularly intense in the House, where leaders of the Congressional Progressive Caucus have long expected that the minimum wage battle would turn into a broader debate on the filibuster. Some have privately been girding to have this exact fight with Senate institutionalists at this exact time.

Some on the left still believe their party could take up a fight with the parliamentarian, the Senate’s chief rules referee, to force the minimum wage provision into the bill. But most believe it's a longshot, and are are eyeing the legislative filibuster as the bigger problem.

“Our immediate options on this specific issue [are] to do something about this parliamentary obstacle or abolish the filibuster,” said Rep. Alexandria Ocasio-Cortez (D-N.Y.).

“We hope that the senators, the administration, fight as hard as we’ve been fighting,” added Rep. Ilhan Omar (D-Minn.). “I think it is time that we stop coming up with excuses to do the right thing.”

Even if the filibuster were eliminated, however, it’s unclear if the $15 minimum wage would actually pass the Senate. Sens. Kyrsten Sinema (D-Ariz.) and Joe Manchin (D-W.Va.) have said they do not support increasing the minimum wage to $15 as part of the coronavirus relief package. Manchin has said he supports an $11 minimum wage, which Ocasio-Cortez and others on the left have declared a nonstarter.

And when a group of Senate Republicans introduced a proposal this week to increase the minimum wage to $10, progressives blared their objections. Asked if she’d accept a compromise below $15, Sen. Elizabeth Warren (D-Mass) responded: “We need $15 an hour. That’s where I am.”

POLITICO NEWSLETTERS
Huddle
A daily play-by-play of congressional news in your inbox.

Senate Republicans, meanwhile, are vocally opposing calls to eliminate the legislative filibuster. During negotiations on a power sharing agreement for the 50-50 Senate, McConnell insisted that Democrats commit to keeping the 60-vote threshold, a proposal that Senate Majority Leader Chuck Schumer rejected. And Republicans are quick to remind Democrats that they resisted pressure from then-President Donald Trump to do away with it when they controlled Washington in 2017.

Liberal activists have continually pressured skeptical Democrats on abolishing the legislative filibuster, mounting ad campaigns targeting Schumer — who is up for reelection next year — and others. Since Thursday’s ruling on the minimum wage hike, social justice groups such as Ultraviolet, Women’s March and the Sunrise Movement have called on Biden and Senate Democrats to get rid of the 60-vote margin.

“Everything the voters voted for that helped place Joe Biden in the White House requires the Senate to be able to fully function,” Rahna Epting, executive director of MoveOn, said in an interview.

Nina Turner, an ally of Sen. Bernie Sanders (I-Vt.) who is running for an open House seat in Ohio, said progressives have no plans to let up on their opposition to the filibuster.

“The people who were hired to do the people's bidding are going to have to get the courage to do away with it,” said Turner. “A breaking point is coming. I just don't know the what or the when.”

Marianne LeVine is a reporter for POLITICO, where she covers the Senate. She previously covered lobbying and co- authored POLITICO Influence. @marianne_levine

Laura Barrón-López is a White House Correspondent for POLITICO. Barrón-López previously led 2018 coverage of Democrats for the Washington Examiner.

Sarah Ferris covers the House for POLITICO’s Congress team, focusing on the Democratic caucus. She has covered Capitol Hill for six years, including stints focused on budget and health care policy for POLITICO Pro and The Hill newspaper. @sarahnferris

POLITICO's daily and weekly email newsletters covering the best of politics and policy.